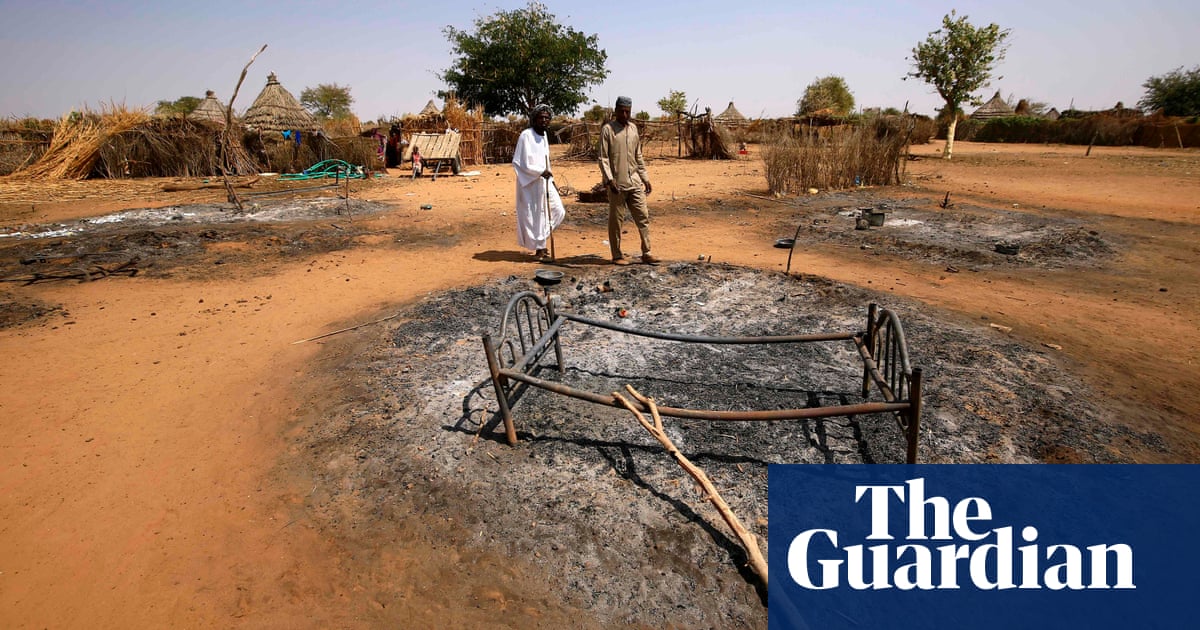 Many towns and villages in Sudan to the north and east of El Geneina, the capital of West Darfur, are no-go areas. The violence that erupted here last week and left 200 people dead has subsided but the tension is palpable.

The area around Jebel Moon, 70km from El Geneina, is surrounded and sealed off by encamped Arab militias tied to the Rapid Support Forces (RSF) of Mohamed Hamdan Dagalo, AKA Hemedti, the second most powerful man in Sudan.

These armed groups are accused of carrying out last week’s massacre at Kreinik and the atrocities in Darfur over the past two years. People living in the villages here are unable to leave for medical treatment, shopping or to visit family without a military convoy, something which is sporadic, local people say.

Hawa Adam, 40, a mother of nine, has been sick and was due to see a gynaecologist in El Geneina, as the clinic in her area has no doctors. She had to wait 21 days to find a seat in a car included in the convoy. When she reached the city, she was stuck after last week’s fighting, worried about her nine children at home.

“I could stay here for another 21 days waiting for a safe way back home,” she says, on her way back. “When I was 15, I once walked on this road to Geneina with my young brothers. We left very early in the morning and reached there after sunset. That was before the war, now it’s impossible to even drive.”

She is interrupted by the driver, who shouts at her to raise her window as they approach a group of 15 armed Arab men on the road ahead. The driver, who is also from her Misseriya Jebel community, tells the passengers in a whisper: “I saw six other armed men hiding behind the bush too. They looked as if they wanted to carry out an attack, but we are lucky today.”

After passing the danger, the passengers all begin to discuss the people they knew who had been killed in this area, for belonging to the Misseriya Jebel community.

This region is inhabited by non-Arab communities, mostly farmers, who have experienced oppression from Khartoum for decades, pitting them against neighbouring nomadic peoples and marginalising them politically and economically. This culminated in 2003 with the ousted president Omar al-Bashir’s murderous campaign against the insurgent groups of the Justice and Equality Movement and the Sudanese Liberation Army, which the US called “a genocide”.

The new wave of violence in Darfur between nomadic Arab militias, supported and armed by the RSF, and farmers has erupted partly over pressure on water and land, exacerbated by the climate crisis. The situation was aggravated by the failure of the transitional authorities to fully step up after the 2020 withdrawal of UN and African Union peacekeeping forces from the area. A peace agreement was signed before the withdrawal, but only by five rebel groups.

Observers predict more violence and conflict for West Darfur. A recent report by the US Institute of Peace pointed to the lack of controls on Arab militias, including the Janjaweed, who were largely incorporated into the RSF, and said they were motivated by an Arab supremacist agenda in addition to their pursuit of good pasture and water.

The idea of forming this army is to protect our people, who get no protection from the government in any attack by the Janjaweed

But in Darfur, guns are cheap and available. The Jebel Moon youth have formed their own army unit, called al-Shouosh, or al-Aagda. A small band carrying Kalashnikovs met the governor of Darfur, Minni Minnawi, recently. They were wearing a mix of military uniforms with desert turbans and traditional Sudanese clothing. They accused the RSF of attacking their people and vowed to fight back.

However, the Arab militias are far more advanced militarily. “The idea of forming this army is just to protect our people in here who get no protection from the government at all in any attack by the Janjaweed,” says Abdulatif Ali, a civilian member of the group, which has an unarmed branch representing women and young people.

Thousands have fled their villages, some going to the mountains, some to Chad and others to Darfur’s capital. Khadoja Gamar, 25, who has five children, told the Guardian her village, Aroshori, was in ruins after being burned down in March. Many people fled to Chad, but its water pumps still function so Gamar and other villagers come by donkey to collect water, despite the dangers.

Gamar says she leaves her children hidden in the mountains when she makes the trip: “We need security. If we were back here again, the Arabs might come to kill us all. They took even my mobile phone, and the things that they can’t take, they just burn down.”

In Adikong, once a busy commercial town on the Chadian border, there have been three attacks by the Janjaweed this year. The last one, in March, led to all its 37,000 people leaving for Chad.

Last week, one couple returned to check on their onion crop in the deserted and silent town. They told the Guardian that they left their children in Chad and had come back to see their field. “We lost everything, we had to take only our children and run. Our house was burned down after the Arabs came in killing and looting everything they found,” says Doula Ali, 38.

Sign up for a different view with our Global Dispatch newsletter – a roundup of our top stories from around the world, recommended reads, and thoughts from our team on key development and human rights issues, delivered to your inbox every two weeks: