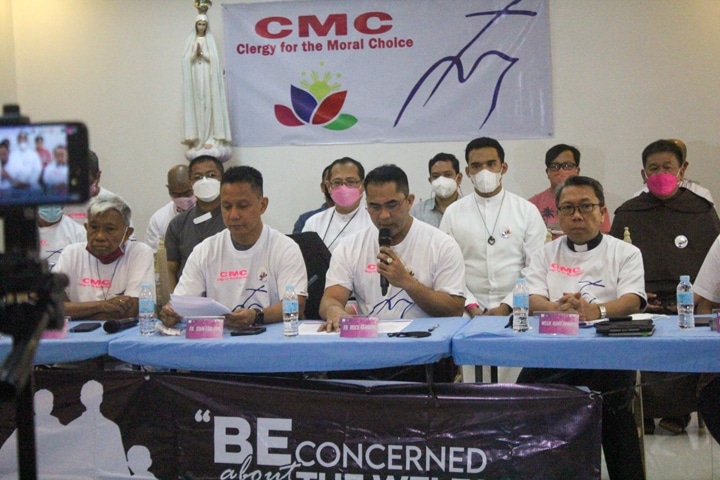 Filipino Catholics will mark this year’s celebration of the Good Shepherd Sunday today, the fourth Sunday of Easter.

The feast day comes after hundreds, if not thousands, of priests, religious nuns and brothers and members of lay organizations have already expressed support for a tandem since the campaign for the national elections began on February 8.

In an unprecedented development in the long and contentious history of the Catholic church in the country, the endorsements of its prelates, priests, the religious and laity continue to pour in. This question, however, begs to be asked: Will their flock listen?

The 1,422-strong Clergy for the Moral Choice (CMC) added its voice in support for Vice President Leni Robredo and her running mate Senator Kiko Pangilinan in a news conference at the Manila Cathedral last Wednesday.

“If you expound on [today’s] reading and the essence of the celebration, you will come to realize that Jesus was referring not only to bishops and the clergy to be the good shepherd and to be the shepherd for others,” Msgr. Melchor D. David, one of CMC’s founders, said in an interview with  BusinessMirror  on Monday.

“It refers to each and every one of us as, in the same way, it also refers to anyone who is a fake, a false or a hired shepherd,” David said.

David, parish priest of Mary, Mother of Good Counsel and priest director of the Council of the Laity of the Diocese of Parañaque, said the current situation calls for the clergy’s concrete action.

Novaliches Bishop Antonio R. Tobias believes that the Catholic church should have played a more active role in the past elections, saying “priests have always felt it was the right.”

“This is probably the first time that priests and bishops came out and continue to come out to reveal their chosen candidates,” Bishop Tobias said in an interview with  BusinessMirror  on Monday.

Tobias is one of the 13 bishops in the Clergy for the Moral Choice.

“For the longest time, the church has not been as open as [now] because in the past there was a view that the church should not be involved in politics. This proved harmful for the country,” he explained in Filipino.

Tobias added that in our country’s history, it is only the Catholic church that did not dip its hands in the elections.

“With other churches, such as Iglesia ni Cristo, it is clear that they endorse candidates not according to moral choice, but chooses whoever will be more beneficial to them,” he said.

He lamented that in the past elections, “the right candidates do not come out as winners.”

“But even if we would like the people to vote according to their own conscience, they are unable to do so. But we cannot just let this pass,” he said.

The bishop said that as the election draws near, it is clear that he and the other bishops  have  a choice and that this candidate should rightfully win.

“The church came out for the first time and I think this is the right way of doing it,” he said.

“Now there is a clear choice that people should also choose because it is right and true. We never did this before. Let’s see how it could make a difference,” the bishop explained.

The bishop clarified that the Catholic church does not interfere or meddle in politics.

“Religion has long meddled in the country’s affairs. We [Catholic Church] do not. But many have benefited from it and it was wrong. It will not push for the moral choice because religion benefits from it or for some priests alone. Thanks that what should have long come out is now out,” he explained.

Tobias clarified that the  Canon Law only prohibits priests from entering politics or becoming the candidates themselves.

“The Canon Law does not prohibit us from telling the people who to vote for, and this is what our priests, bishops and the church are doing now,” he pointed out.

This, he said, is the real role of the church.

“I think politics will become different now because the Catholic Church has finally come out of its shell. Today it has become clearer to me who should be the rightful winner,” the bishop said.

He noted that people from “all walks of life” are now rooting for the same candidate. He is thankful that the church has reached this level.

“It took [us] long but let us see its effect. I think it is giving a dent. It is not partisan because partisan means all candidates are the same. We are letting everyone know that the moral choice is based on one’s conscience),” he said.

He said that it is his obligation as a priest and a bishop to show the “right way.”

David  said key members of CMC first met on February 17 at the “penitential walk” organized by the Archdiocese of Manila to pray for voters’ discernment on the May 9 elections.

The group met every Friday, and on March 6 it finally came up with a statement of support naming Robredo and Pangilinan.

David said they “cited a lot of issues that led us to that communal discernment of coming up with common candidates.”

“It will be unthinkable for the church to remain neutral. It should be far from the identity of the church to become neutral when it comes to social issues that greatly affect the lives of Filipinos,” the priest said.

He explained that it is not simply a matter of choosing between the son and namesake of the late dictator Ferdinand Marcos Jr., Robredo or any of the candidates.

There is, he said, a “very glaring” struggle between truth and falsehood or between real history and a revised history.

“I could not live with a peaceful mind and a peaceful heart when many of my parishioners appreciate what the revised history is telling them. One reason is that they have been fed with false news, false facts and revised facts that led them to idolize the Marcos era,” David said.

The CMC initially garnered 1,043 signatures after its statement of support was sent to various dioceses all over the country.

He noted that after some reflection the priests realized the “significance of the number.”

“Ten is the number of Leni and four plus three is Kiko’s. Second, both filed their certificates of candidacy on October 7, or 10 and seven, which was also the triumph of the Battle of Lepanto,” he said.

David, who has been a priest for 41 years, started talking to his parishioners about what really happened during the martial law years. To his dismay, many considered the years of Marcos dictatorship as “golden.”

“How can you call them golden years when many were jailed without due process and people languished in poverty while only a handful lived affluent lives?” he asked them. To counter these views, David infused in his homilies the issues related to the social teachings of the church.

But in spite of his efforts to explain the social teachings in his homilies, David said many still approach him to ask in Filipino: “Who is it really?Who are you referring to?”

“This is not because they do not know everything, but it simply means they have been bombarded with falsehood,” he said.

The monsignor, who is also director of the Diocesan Ministry on Good Governance, Public Affairs and Advocacy, said this is his first time to openly support a particular candidate, which he did together also for the first time with the other clergy.

So will the flock listen to them? David had this to say: “As we do our share for the good of our people, let us give room for the Lord to make His miracle.”