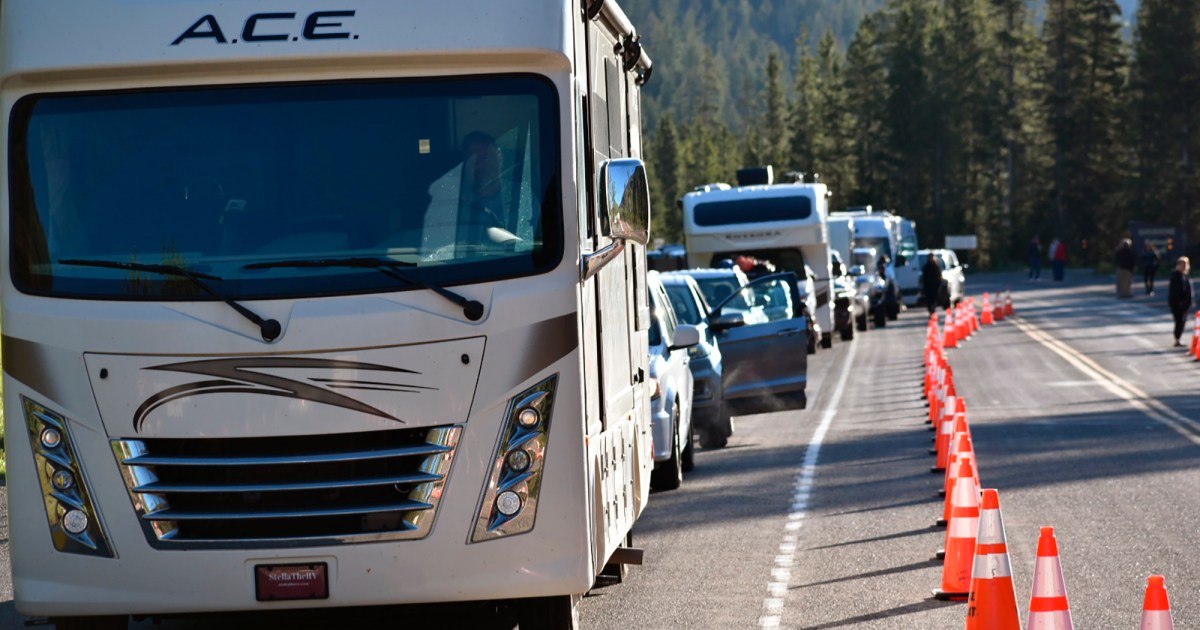 The park’s south loop, which is open, has areas under construction and includes areas affected by floods.

The Yellowstone National Park, the United States’s first national park, has partially reopened, after record flooding and rockslides following a burst of heavy rains forced the park to close for the first time in 34 years.

Hundreds of cars, trucks and recreational vehicles were backed up in long lines at entrances to the renowned park on Wednesday morning, as park managers raised the gates at three of Yellowstone’s five entrances.

The park, which spans parts of Wyoming, Montana and Idaho, was closed to visitors, including those with lodging and camping reservations since June 13, when 10,000 visitors were ordered out after rivers across northern Wyoming and southern Montana surged over their banks following a torrent of rainfall that accelerated the spring snowmelt. The cost and scope of the damage are still being assessed.

The record floods reshaped the park’s rivers and canyons, wiped out numerous roads and left some areas famous for their wildlife viewing inaccessible, possibly for months to come.

The reopening of the south loop comes as officials in Yellowstone are still tallying the extent of the damage. Based on other national park disasters, it could take years and carry a steep price tag to rebuild. It is an environmentally sensitive landscape with a huge underground plumbing system that feeds into the park’s geysers, hot springs and other thermal features. Construction season only runs from the spring thaw until the first snowfall, a narrow window that means some roads could receive only temporary fixes this year.

Muris Demirovic, 43, of Miami and his 70-year-old mother arrived at the east entrance at about 5:30 am (11:30 GMT) on Wednesday and were second in a line of dozens of cars. He and his mother, who is from Bosnia, were on a cross-country trip visiting national parks and Yellowstone was at the top of their list.

“This is a once-in-a-lifetime trip for me and my mom, so I had to make sure she sees this,” he said.

The closure came as Yellowstone was gearing up to celebrate its 150th anniversary year, and as local communities heavily dependent on tourism were counting on a rebound following COVID-19 travel restrictions during the past two summers.

Some of the premier attractions at America’s first national park will again be viewable, including Old Faithful — the legendary geyser that shoots towering bursts of steaming water almost like clockwork more than a dozen times a day.

But the bears, wolves and bison that roam the wild Lamar Valley and the thermal features around Mammoth Hot Springs will remain out of reach. The wildlife-rich northern half of the park will be shuttered until at least early July, and key routes into the park remain severed near the Montana tourist towns of Gardiner, Red Lodge and Cooke City.

It is unknown how many visitors will show up in the flooding’s immediate aftermath, but the lines indicate many tourists stuck to their plans despite uncertainty last week about when the park would reopen. Licence plates at the east entrance near Wapiti, Wyoming, indicated they were from Indiana, Arkansas, Ohio, Colorado, British Columbia in Canada and other places. The first visitors going through did not have to contend with other traffic, but they had to watch for marmots – large ground squirrels – on the road.

To keep visitor numbers down while repairs continue, park managers will use a system that only allows cars with even-numbered last digits on their licence plates to enter on even days, while vehicles with odd-numbered last numbers can come on odd days.

Groups of visitors travelling together in different cars are exempt from the licence plate system, as well as people with reservations at campgrounds and hotels in the park.

If traffic along the park’s 644 kilometres (400 miles) of roads becomes unmanageable, officials said they will impose a reservation system to enter the park.