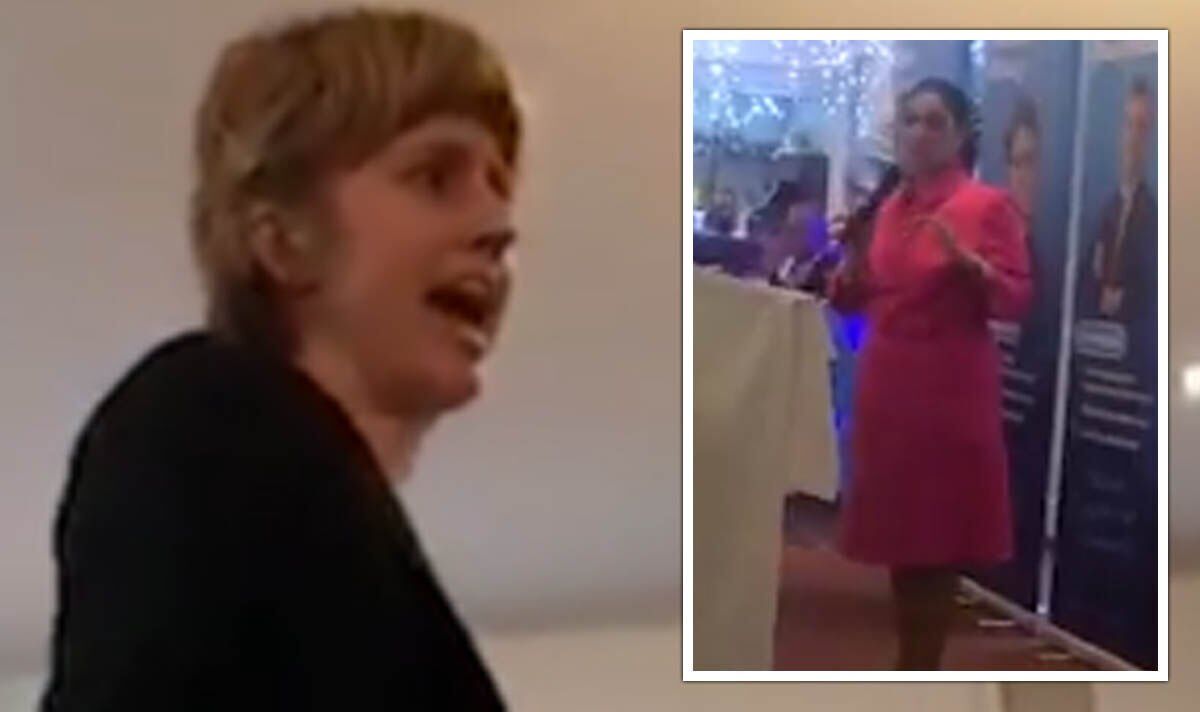 Priti Patel had barely started her speech at the Bassetlaw Conservatives Spring Dinner on Friday night when a group of protesters began standing on chairs to voice their disapproval over the Rwanda migration policy. In a video shared by campaign group Green New Deal Rising, several guests lashed out at the Home Secretary before they were swiftly dragged out by security. Other guests were quick to drown out the comments by yelling at them to “get out”.

Ms Patel said: “Good evening everybody, I actually just want to start…” when a guest suddenly stood up from her chair.

She said: “Priti Patel your racist policies are killing people.

“Your plans to send people seeking asylum to Rwanda are inhumane, they’re inhumane and are going to ruin people’s lives.”

Another added: “Priti Patel, as a young person who wants to live in a fair and compassionate society, we are disgusted by your treatment of refugees in the UK.”

As the protesters were escorted out, they chanted: “Say it loud, say it clear, refugees are welcome here!”

The group shared the video on Twitter today with the caption: “Last night we disrupted Priti Patel because her Rwanda plan is cruel, morally bankrupt and it will cost lives.

“We demand the Government drops this widely condemned policy and provides support for people seeking safety.

“No matter where we come from, we all deserve dignity and respect.”

Speaking to reporters at Southampton Airport on Wednesday, Mr Johnson claimed “we always knew” that “liberal lawyers” would try to make the plan difficult.

However, he stressed the partnership between Rwanda and the UK is a “very, very sensible thing”.

The Prime Minister said: “It’s a great deal between two countries, each helping the other.

“Of course, there are going to be legal eagles, liberal lawyers, who will try to make this difficult to settle. We always knew this was going to happen, but it is a very, very sensible thing.

“If people are coming across the Channel illegally, and if they are, their lives are being put at risk by ruthless and unscrupulous gangsters, which is what is happening at the moment.”