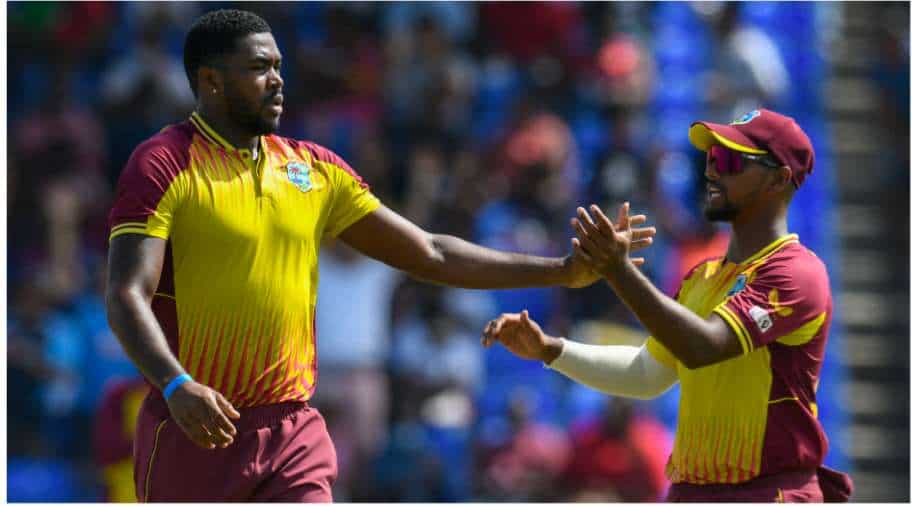 Brandon King`s fiery knock of 68 after Obed McCoy`s six-wicket haul guided West Indies to the five-wicket win over India in the second T20I of the five-match series at the Warner Park, St Kitts on Monday. West Indies maintained a stronghold on the match in the chase with opener Brandon King playing an anchoring role after Obed McCoy`s six-wicket haul helped the hosts bundle out India for 138 runs.

Chasing a target of 139, West Indies got off to a good start as their openers Brandon King and Kyle Mayers started smashing Indian bowlers all around the ground. But their stint of blistering batting was cut short by Hardik Pandya as he dismissed Mayers in the 6.1 over. Mayers`s wicket invited captain Nicholas Pooran to the crease, who could not do much and went back to the pavilion after scoring 14 runs in 11 balls on the delivery of Ravichandran Ashwin. The star batter of West Indies Shimron Hetmyer could not do much and was sent back to the hut by Ravindra Jadeja. In the 15.3 over of the innings, Brandon King was dismissed after scoring 68 runs in 52 balls by Avesh Khan.

At that point of the run chase, King had done his part to take his team closer to winning the second T20I against India. After 17 overs the equation of the chase went down to 27 runs in 18 balls Devon Thomas and Rovman Powell started playing aggressively and smashed Pandya for a six over the long-on. Arshdeep Singh gave India a breakthrough as he dismissed hard-hitting batter Powell in the 19th over of the innings. Powell`s wicket invited Odean Smith to the crease. In the last thrilling over of the innings hosts needed 10 runs in 6 balls. Devon Thomas hammered Avesh Khan for back-to-back one six and one four to guide his team to the victory with five wickets in hands.

Earlier, the hosts were dominant during the Indian innings, dismissing skipper Rohit Sharma was sent off the very first ball after which India struggled to get proceeding.  McCoy`s figures of 6/17 were the best by a West Indies bowler in T20Is and India were all out for just 138 runs on a ground that is known to allow batters to hit sixes.