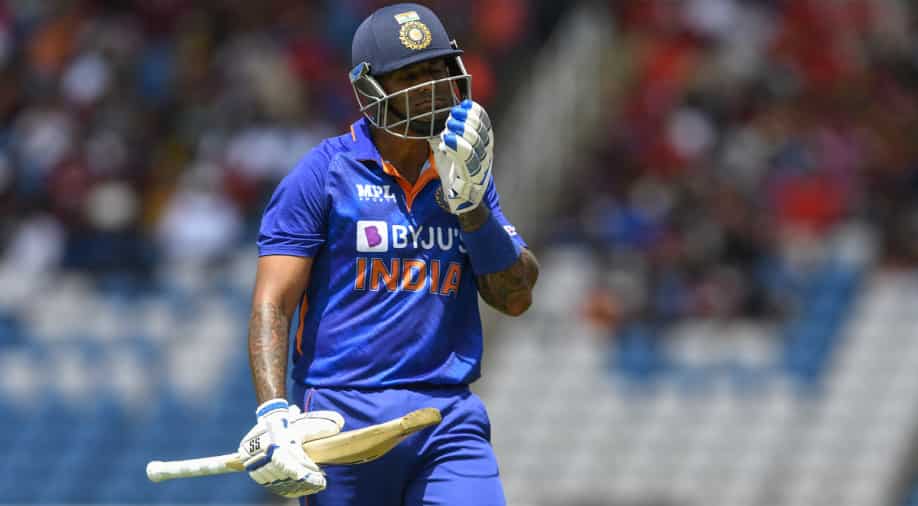 Former India cricketer Kris Srikanth has slammed Indian captain Rohit Sharma and the team management for trying to ‘spoil’ Suryakumar Yadav with their opening experiment in the ongoing T20I series against West Indies. In the absence of first-choice opener KL Rahul, India have experimented a lot as far as the opening slot is concerned and have tried the likes of Rishabh Pant and Suryakumar Yadav as openers despite having Ishan Kishan in the squad.

The Indian team tried Pant as an opener in a few matches on their tour of England before surprisingly opening the batting with Rohit and Suryakumar in the ongoing T20I series against West Indies. Suryakumar, who is a specialist middle-order batter, hasn’t quite managed to impress as an opener so far in the first two matches.

After scoring 24 runs off 16 balls in the series-opener against West Indies, Suryakumar was dismissed cheaply on 11 off 6 balls in the second T20I between the two sides at the Warner Park in St Kitts on Monday. The experiment at the top order has not worked for India and has seen captain Rohit receive a lot of flak for the same.

Former India cricketer Kris Srikanth lashed out at Rohit and the Indian team management ahead of the start of the second T20I against West Indies on Monday. Srikanth said Suryakumar is certain to bat at number 4 in the upcoming T20 World Cup 2022 and he should not be asked to open where he might fail a couple of times and lose his confidence.

“Suryakumar Yadav is a brilliant player at No.4. He should be batting at No.4 in the T20 World Cup. So why do you want to make him open. If you want someone to open, drop Shreyas Iyer and pick Ishan Kishan instead. What I am trying to say is simple…don’t spoil a cricketer like Suryakumar Yadav. Please don’t do that. I will tell you what will, after a couple of failures he will lose his confidence. Cricket is a confidence game,” Srikanth said during a chat on FanCode.

“Whatever it was, I completely failed to understand it. You ought to have used Rishabh Pant today if you were planning to use him as the opener for a couple of games. Give him five chances at least. In addition, Rohit Sharma, the captain, and Rahul Dravid, the coach, support the players for at least 5–6 games,” he added as he blasted Rohit and the Indian team management.

After being asked to bat first in the 2nd T20I in St Kitts on Monday, India got off to a poor start as they lost Rohit on a duck before Suryakumar departed on just 11. Shreyas Iyer, who came out to bat at no. 3 flopped once again as he too was sent back cheaply on 10 off 11 balls leaving the visitors reeling at 40/3.

Also Read: ‘Behave like a human being’ – Shahid Afridi on ‘city biases’ in Pakistan team selection

With the help of crucial contributions from Rishabh Pant (24), Hardik Pandya (31) and Ravindra Jadeja (27), India managed to post a fighting total of 138 runs on the board but failed to defend it despite excellent spells from the likes of Arshdeep Singh, Jadeja and Hardik Pandya.

West Indies chased down the target of 139 runs in the final over and won the game by five wickets with four balls to spare to level the series 1-1 after their 68-run loss in the series-opener.