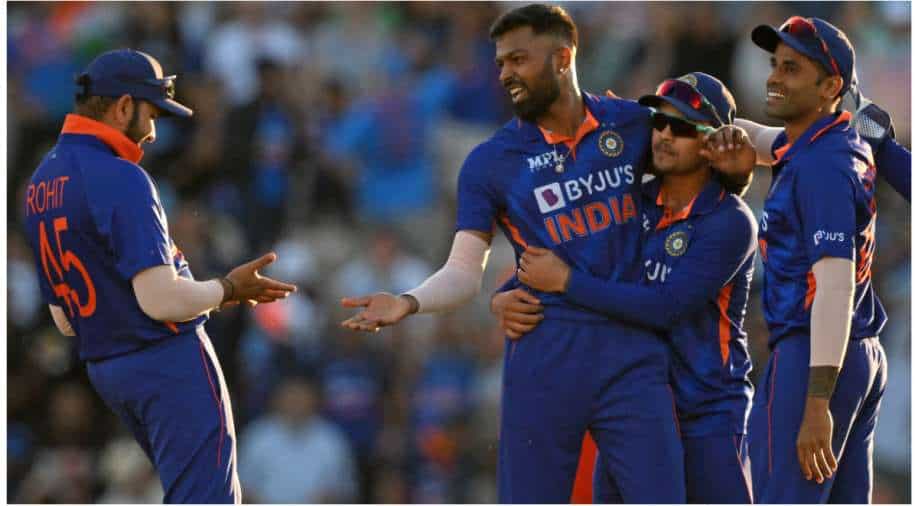 Rohit Sharma-led India faced England in the first T20I, of the three-match series, on Thursday (July 07) in Southampton. India were without the likes of Virat Kohli, Rishabh Pant, Jasprit Bumrah and Ravindra Jadeja but the second-stringed side beat England comfortably, by 50 runs, to take a 1-0 lead.

Opting to bat first at The Rose Bowl, Southampton, India rode on quickfire knocks from Deepak Hooda, Suryakumar Yadav and all-rounder Hardik Pandya’s 51 to post 198-8. In reply, Hardik rose to the occasion with the ball and returned with a match-winning spell of 4-0-33-4 to guide India to an easy win over Jos Buttler & Co. With his all-round blitz, the 28-year-old Hardik also scripted a massive feat by becoming the first-ever Indian to score a fifty and return with a four-wicket haul in a T20I.

Thus, Hardik joined the list of elite all-rounders such as Dwayne Bravo, Shane Watson, and Mohammed Hafeez to have achieved the same feat earlier. Former all-rounder Yuvraj Singh came close to this record in 2009 when he returned with a half-century and scalped three wickets in India’s six-wicket win over Sri Lanka in Mohali in 2009.

At the post-match presentation, Player-of-the-Match Hardik said, “The last time I played a T20 in England, I think I took 4 wickets and scored some 30. So I kind of knew I was the first Indian to score fifty and take 4 wickets. I am enjoying my cricket right now. For me a lot of time goes into the preparation to get my body ready. The kind of break I took before this run of play I want to capitalize on the opportunities. I felt I needed that break. It is about giving your 100% and when you don’t do that, there is no point playing. So I needed that break and now I am happy to be in this place right now.”

India will now take on England in the second and penultimate T20I in Edgbaston, Birmingham