Skip to content
HomeSports‘He is a loving guy’: Pakistan star Mohammad Rizwan lauds Cheteshwar Pujara after playing together for Sussex 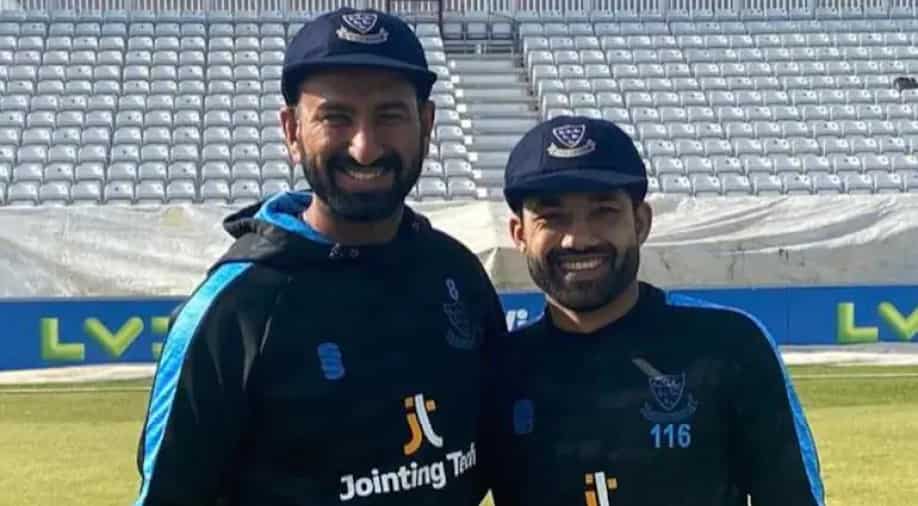 Pakistan wicket-keeper batter Mohammad Rizwan has heaped praise on Indian stalwart Cheteshwar Pujara after playing with him for Sussex in county cricket. Rizwan revealed he has a cordial relationship on and off the field with Pujara and never misses a chance to tease him in the dressing room.

India and Pakistan share one of the greatest rivalries in cricket but the two teams have not played any bilateral cricket since 2013 due to political tensions between the two nations. Thus, cricket fans around the globe were excited when Rizwan joined forces with Pujara for Sussex in the county championships division 2.

The duo has been brilliant for their side and has enjoyed batting with each other. Pujara and Rizwan shared a 150-run stand for Sussex in their clash against Durham where the Indian batter was seen appreciating his Pakistani teammate after his fifty in the game.

Opening up about his bond with Pujara, Rizwan revealed the senior India batter is a nice and loving guy and that they have never felt strange sharing the same dressing room at Sussex. Rizwan also revealed that Pujara’s concentration level is one trait he would like to learn from the Indian veteran.

“As far as myself and Pujara are concerned, I didn’t feel anything strange. And hopefully, if you ask him, his answer will be the same as mine. Although I do share a laugh with him and tease him (laughs) and everyone in the team knows this,” Rizwan told Cricwick.

“He is a very nice and loving guy. And his concentration and focus too… If you get a chance to learn something, you should do it,” he added.

Also Read: ‘We gave up & were weak’: Gambhir delivers strong speech in dressing room after LSG lose to GT

“In terms of concentration levels and I told this to the coaches here too. In my whole career, the players with most focus, concentration are Younis bhai, Fawad Alam and his (Pujara’s). Pujara is second on my list and Fawad Alam on three in terms of pure concentration and focus. I rate these three players very highly,” he said.

After being dropped from the Indian Test squad for the home series against Sri Lanka earlier this year, Pujara had decided to head to England and play some county cricket to regain form. He has been enjoying a stunning campaign for Sussex having already scored two double centuries and as many hundreds for the team.

Also Read: ‘He has full authority’: Kohli opens up on his equation with Faf du Plessis after leaving RCB captaincy

Pujara has been making a strong case for his selection in the Indian Test squad once again with his performances in England. It remains to be seen if the senior batter will be allowed to make his comeback in the whites for India in their next Test assignment.