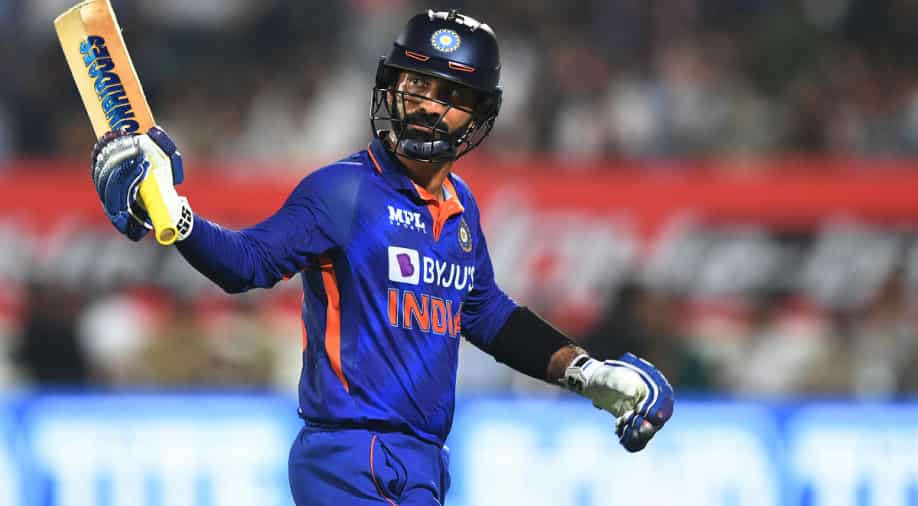 The Indian team has already begun their preparations for the upcoming T20 World Cup 2022 as they aim to go the distance this time around after enduring a disappointing campaign in the showpiece event last year. India failed to make it to the knockout stage of the T20 World Cup 2021 in UAE last year. With the World Cup just a few months away, India face a lot of selection headaches.

While the top four in the batting line-up is certain, there remain a lot of options to consider in the middle-order with the likes of Suraykumar Yadav, Deepak Hooda, Hardik Pandya, Dinesh Karthik and Ravindra Jadeja all in the fray. Karthik has been unstoppable as a finisher ever since making his comeback for the Indian team earlier this year and is one of the favourites to make the cut.

The veteran wicket-keeper batter had a sensational campaign for the Royal Challengers Bangalore (RCB) in the Indian Premier League (IPL) 2022 and has continued his purple patch for the Men in Blue. While many believe he deserves a spot in India’s T20 World Cup squad, former India cricketer Ajay Jadeja feels otherwise.

Also Read: Where should Kohli bat? Ex-Indian stumper shares his preferred slot for star batter ahead of Asia Cup

Jadeja believes Karthik should be in the batting line-up if India play both captain Rohit Sharma and Virat Kohli in the playing XI as he will act like an ‘insurance’ down the order. However, if the duo aren’t not playing together Karthik is not needed. The former India cricketer also said he won’t pick Karthik in India’s T20 World Cup squad but won’t mind having him alongside him in the commentary team.

“Now if you want to play the way I have heard them…aggressive then you have to pick differently. If Virat Kohli and Rohit Sharma walks in, you need Dinesh Karthik at all cost. He is your insurance. But if you don’t have either of them then Dinesh Karthik has no work here. But yes I would not put Karthik there, he can have a seat beside me. He is very good as a commentator. But there, in the team, I would not pick him,” Jadeja said during a discussion on FanCode.

Karthik, however, has been picked in India’s squad for the upcoming Asia Cup 2022 later this month with the selectors indicating that he remains in their plans for the T20 World Cup 2022. While he snubbed Karthik, Jadeja wants fast bowler Mohammed Shami to be in India’s squad for the World Cup despite him not being in the scheme of things in T20Is.

“I have added Shami to the team. So for me, I select bowlers first. So Shami is a certainty. Bumrah, Arshdeep and Chahal. These are the four certainties. In batting, four are certainties for me – Rishabh Pant, Hardik Pandya, Suryakumar Yadav, and Deepak Hooda. For this bowling attack, you have powerplay, middle overs and death overs sorted,” said Jadeja.

Shami has not played a T20I match for India since his last appearance for the Men in Blue in the T20 World Cup 2021 last year. He is also not part of India’s squad for the Asia Cup 2022 and is unlikely to make the cut for the T20 World Cup in Australia this year.