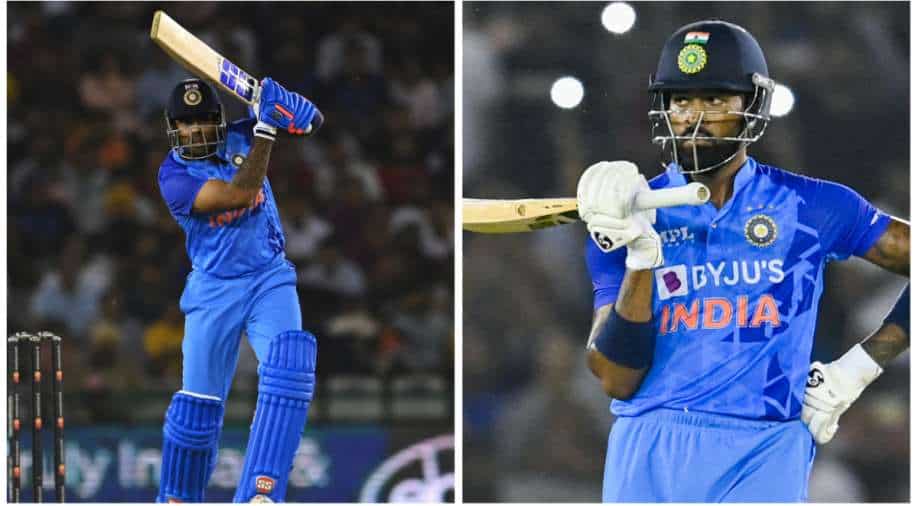 India lost to Australia in the three-match T20I series opener on Tuesday evening (September 20) at the PCA IS Bindra Stadium, Mohali. Being asked to bat first, the hosts made 208 for 6 thanks to KL Rahul’s 55, Suryakumar Yadav’s 46 and all-rounder Hardik Pandya’s 30-ball 71 not out. However, Australia chased down the total with four wickets in hand, in 19.2 overs, courtesy of Cameron Green’s 61 and Matthew Wade’s finishing skills (21-ball 45 not out).

Despite the match result not going in India’s favour, a lot of individual brilliance gave fans plenty to cheer for. In the latest ICC T20I rankings for batters, the likes of SKY and Hardik also gained big following their blitz in Mohali. SKY, India’s best T20 batter, had entered the top-five in the Asia Cup and has now toppled Pakistan captain Babar Azam to take the No. 3 spot. Babar, on the other hand, has seen a dip in form but managed 31 runs in Pakistan’s home T20I series opener versus England, also held on Tuesday in Karachi.

Meanwhile, Hardik moved up by 22 places to 65th courtesy of his sensational hitting in Mohali T20I versus Aaron Finch & Co. His knock was laced with 7 fours and 5 sixes, at a whopping strike rate of 236.67. In the all-rounders’ list, the 28-year-old Hardik also climbed up to take the No. 5 spot.

Among the other Indian batters, vice-captain KL Rahul also moved up to take the 18th spot following his 45-ball 55 versus the Men in Yellow in his happy-hunting ground in Mohali. Axar Patel, returning with 3 for 17, also rose up in the all-rounders’ list, sitting at the 33rd spot with a jump of 24 positions. However, Bhuvneshwar Kumar fell to the ninth spot among bowlers after leaking as many as 31 runs in his last 12 deliveries to tilt the match in Australia’s favour in Mohali.

India will hope for a series-levelling win in the second and penultimate T20I versus Australia, which will be held in Nagpur on Friday evening (September 23).