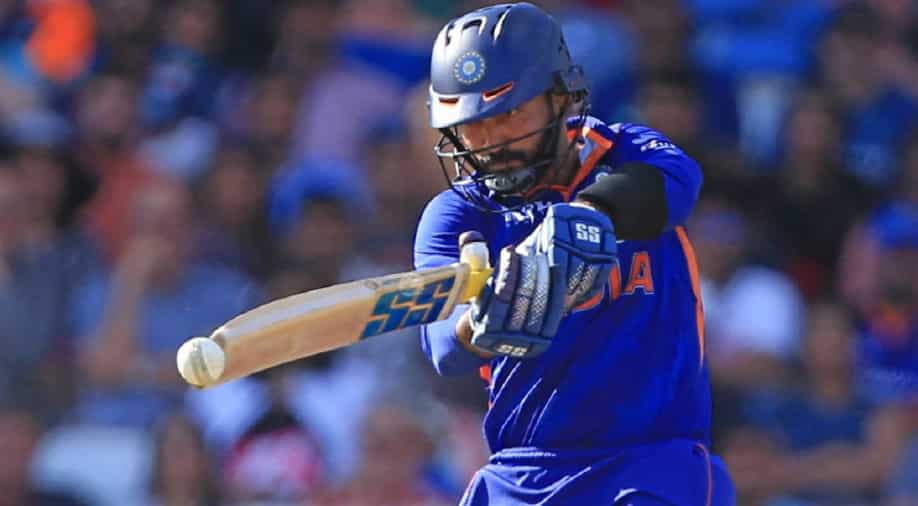 Dinesh Karthik has been unstoppable for Team India as a finisher ever since making his comeback in international cricket earlier this year. The veteran wicket-keeper batter had a phenomenal season for Royal Challengers Bangalore (RCB) in the Indian Premier League (IPL) 2022 and was deservingly allowed to make his comeback for the Indian team.

The 37-year-old has continued his purple patch in international cricket and already seems to have cemented his spot as a finisher for India in T20Is. Karthik played a brilliant knock of unbeaten 41 runs off 19 balls in the 1st T20I between India and West Indies at the Brian Lara Park in Trinidad on Friday.

He helped India post a strong total of 190 runs on the board in 20 overs with his quickfire finishing cameo as the Men in Blue registered a comprehensive 68-run win against the hosts. Karthik’s international career seemed all but over as he had last played for India during the 2019 ODI World Cup before making his comeback earlier this year.

Also Read: ‘Who can stop him now?’: BCCI selector on Karthik’s chances of making it to India’s T20 World Cup squad

However, he put in the hard yards and mastered the art of finishing to regain a spot in the T20 team and now looks set to be part of India’s squad for the upcoming T20 World Cup 2022 in Australia later this year. Speaking about Karthik’s dream comeback, former Pakistan batter Salman Butt the veteran wicket-keeper batter is lucky he was born in India.

The former Pakistan batter also went on to praise the BCCI for building a strong bench for Team India keeping the future in the mind. He praised the youngsters like Shubman Gill, Shreyas Iyer and Arshdeep Singh while also lauding Karthik for his finishing heroics.

“Youngsters are playing very well for India. They are damn serious about their bench strength for years to come. They have constructed an amazing team. Shubman Gill was quite impressive [in ODIs]; Dinesh Karthik is playing as a finisher [in T20Is]. The batsmen in between like Suryakumar Yadav improving day by day, Shreyas Iyer is available. Arshdeep Singh is bowling well. Overall, there is plenty of talent,” said the former Pakistan cricketer.