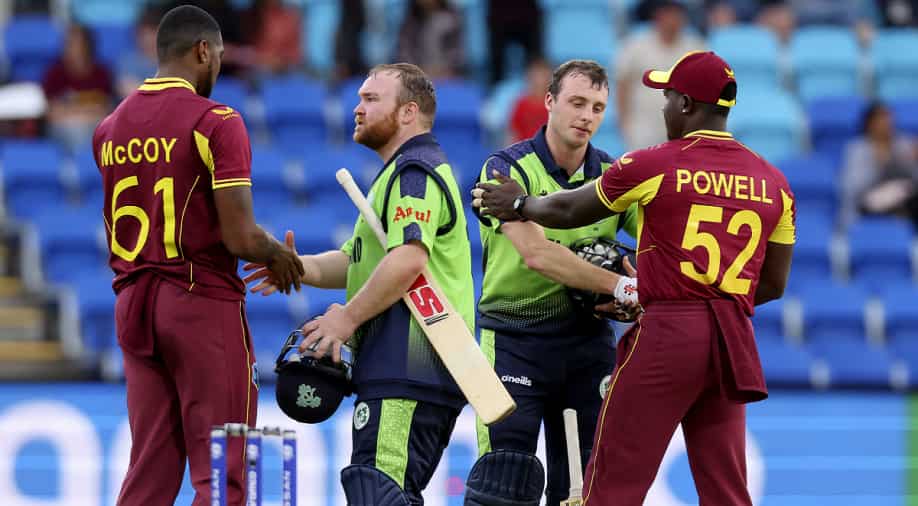 In a major upset, Ireland thrashed two-time champions West Indies by nine wickets in the qualifiers at the Bellerive Oval in Hobart on Friday to knock them out of the T20 World Cup 2022 and reach the Super 12 stage. Ireland chased down the target of 147 runs without breaking a sweat to pull off one of their most important wins in recent times.

Ireland failed to get past the first round in their last five appearances in the T20 World Cup. However, the Andrew Balbirnie-led side pulled off a heist against West Indies on Sunday courtesy of an incredible batting display. Paul Stirling was the hero for Ireland with a stunning knock of unbeaten 66 while captain Balbirnie and Lorcan Tucker also made crucial contributions.

Ireland bowlers produced a brilliant effort to restrict West Indies on a moderate total of 146 runs as spinner Gareth Delany impressed with the ball and finished with a three-wicket haul. In reply, Ireland had a cakewalk in the run chase ad the West Indies bowlers were taken to the cleaners by Stirling and Tucker.

Stirling and Balbirine went all guns blazing at the top after opening the batting for Ireland as the pair added 73 runs for the first wicket. Balbirine was dismissed on 37 off 23 balls by Akel Hossein, which ended up being the only dismissal during Ireland’s run-chase as they dominated the proceedings with the bat.

After the skipper’s departure, Stirling continued his onslaught at one end and was joined by Tucker, who played a crucial knock of unbeaten 45 off 35 deliveries. The duo combined to take their side home comfortably with 15 balls to spare and secure a spot in the Super 12 stage.

Ireland will be joined by the winners of the clash between Scotland and Zimbabwe in the Super 12. If the Irish manage to retain the top spot, they will join the likes of India and Pakistan in Group 2 in the Super 12 of T20 World Cup 2022.