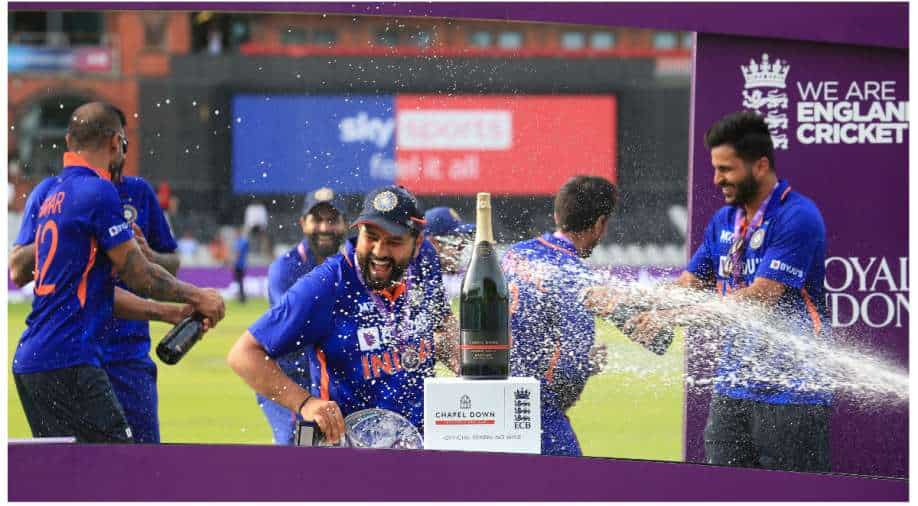 Rohit Sharma-led India faced England in the third and final ODI with the series on the line, being levelled at 1-1 after Jos Buttler & Co.’s 100-run in the penultimate encounter. Winning the toss, India opted to bowl first and dismissed England for 259 in 45.5 overs riding on Hardik Pandya’s 4 for 24.

In reply, England had the upper hand in India’s run-chase as Reece Topley was once again the pick of the bowlers and visitors were reeling at 38/3 and were further reduced to 72 for 4. All-rounder Hardik (71) and Rishabh Pant got together and stitched a match-winning 133-run fifth-wicket stand to take India out of troubled waters and to a stunning five-wicket win. While Hardik departed for a well-made 55-ball 71, Pant played a sensible 113-ball 125-run unbeaten knock. With this, India won their first-ever ODI series on English soil since 2014.

Meanwhile, captain Rohit also became only the third Indian skipper to win an ODI series in England, joining the likes of MS Dhoni (2014) and Md Azharuddin (1990). On the other hand, Rohit became the first Indian captain to win both ODIs and T20Is in England. Before much, his predecessor Virat Kohli had led India to a 2-1 T20I series win in 2018, however, he lost the ODIs — by the same margin — versus Eoin Morgan & Co.

At the post-match presentation, an elated Rohit said, “Very pleased. Came here, wanted to achieve something as a group in white ball. We were here last time and were beaten, I remember that. Not an easy place to come and win games. It was a good pitch, but we do understand it’s not going to be easy if we lose wickets upfront. Positive side of it, these guys haven’t batted much in the middle overs. Today we got to see that with Hardik and Rishabh. At no point we felt they were panicking. They backed themselves and played cricketing shots. He’s a critical member for us (Chahal). Has got so much experience bowling in all formats. Pretty pleased with how he’s come back after the WC. Hardik as well. One side boundary was long, he kept bowling the bouncers and got rewards for it. Not really (Worried about top-order?). To be honest, the wicket didn’t have much. We played some not-so-good shots. Still back those guys to come out good. One of those series where top order hasn’t come to the party. Have got nothing more to say because I know the quality they bring to the team.”