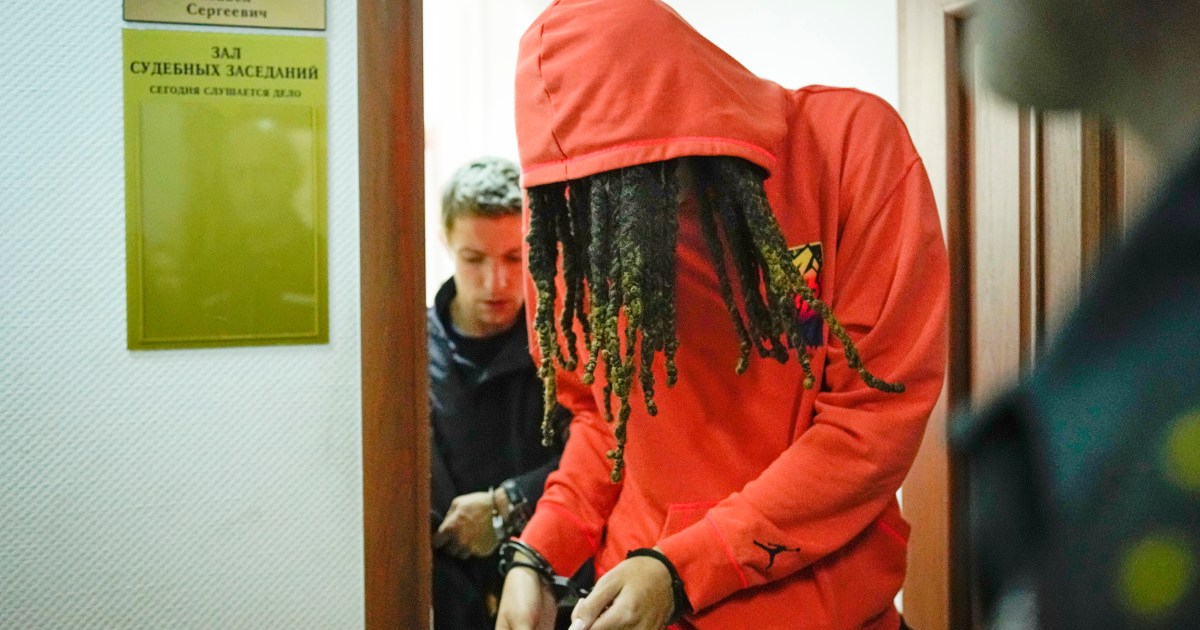 A Russian court has extended Brittney Griner’s pre-trial detention by one month, a lawyer for the US basketball star has said.

Alexander Boykov told The Associated Press news agency on Friday that he believed the relatively short extension of the detention indicated the case would come to trial soon.

Griner, a two-time Olympic gold medallist and All-Star centre in the Women’s National Basketball Association (WNBA), was detained at the airport in the Russian capital in February on charges of carrying vape cartridges that contained cannabis oil in her luggage.

She appeared for the brief hearing on Friday handcuffed, her dreadlocks covered in a red hoodie and her face held low.

“We did not receive any complaints about the detention conditions from our client,” said her lawyer, Boykov.

Her detention has come at a time of heightened tensions between Russia and the United States over the continuing Russian invasion of Ukraine, and the administration of US President Joe Biden has been pushing for access to Griner.

A consular officer from the US embassy in Moscow attended the hearing on Friday, Department of State spokesman Ned Price said.

Speaking to reporters during a phone briefing, Price said that Washington was “very closely” monitoring the case and that the consular officer spoke to Griner.

“The officer was able to confirm that Brittney Griner is doing as well as can be expected under what can only be described as exceedingly difficult circumstances,” Price said.

American officials now have classified her arrest as “wrongful detainment”.

It is not entirely clear why the US government, which for weeks had been more circumspect in its approach, reclassified Griner as a wrongful detainee.

But under federal law, there are a number of factors that go into such a characterisation, including if the detention is based on the detainee being an American or if the detainee has been denied due process.

It has been 84 days since our friend, Brittney Griner, has been wrongfully detained in Russia. It is time for her to come home. @WhiteHouse, we are paying attention and we are counting on you. #WeAreBG

Griner, who plays for the WNBA’s Phoenix Mercury, was in Russia to play club basketball before the US season resumed, a common practice for players, who can earn much higher salaries in foreign leagues than on domestic teams.

The 31-year-old played in Russia for the last seven years during the WNBA off-season, earning more than $1m per season — more than quadruple her WNBA salary.

Griner’s USA Basketball teammates broke their silence last month around her detention, saying they were hopeful everything was being done to get her home safely.

“It has been 84 days since our friend, Brittney Griner, has been wrongfully detained in Russia. It is time for her to come home,” USA Basketball and Seattle Storm WNBA player Breanna Stewart tweeted on Thursday night.

“@WhiteHouse, we are paying attention and we are counting on you,” she wrote.

In early May, the WNBA announced that all 12 teams in the league would place an on-court decal – Griner’s initials and number – honouring her on their home courts.

“As we begin the 2022 season, we are keeping Brittney at the forefront of what we do through the game of basketball and in the community,” WNBA Commissioner Cathy Engelbert said in a statement. “We continue to work on bringing Brittney home and are appreciative of the support the community has shown BG and her family during this extraordinarily challenging time.”

The National Basketball Association’s Phoenix Suns this week also honoured Griner with the same on-court decal, saying it would remain there for the remainder of the NBA playoffs.

Honoring Brittney Griner on our court for the remainder of the playoffs. 💜🧡 pic.twitter.com/7AS3JZ5FYc