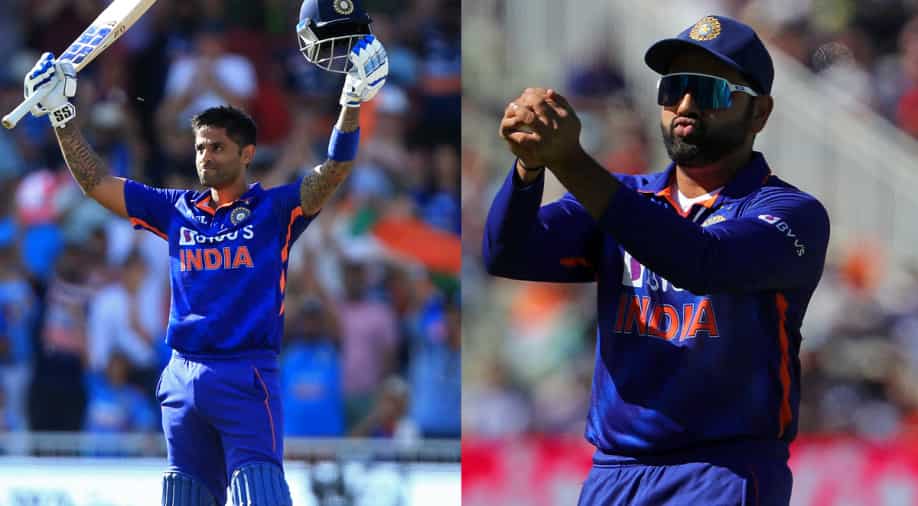 Indian batter Suryakumar Yadav took the England bowlers to the cleaners in the third T20I between the two sides at the Trent Bridge in Nottingham on Sunday as he slammed a sensational knock of 117 runs off just 55 deliveries. Yadav notched up his maiden century for India in T20Is and almost pulled off a miraculous run-chase for the Men in Blue. His stellar knock went in vain as India ended up losing the game by 17 runs.

Asked to bowl first, Indian bowlers were smashed to all parts of the ground by English batters as the hosts got off to a flying start. Dawid Malan played a brilliant knock of 39-ball 77 while big-hitter Liam Livingstone scored a quickfire 49 to propel England to a huge total of 215 runs in 20 overs.

In reply, India were left reeling on 31/3 after losing their top three – Rohit Sharma (11), Rishabh Pant (1) and Virat Kohli (11) cheaply before Yadav took control of the innings. He scored 117 runs off just 55 balls laced with 14 fours and 6 sixes to take India closer to victory but failed to find support from the other end.

Nonetheless, it was a sensational knock from the middle-order batter, who displayed his 360-degree hitting prowess and became only the fifth Indian batter after Suresh Raina, Rohit, KL Rahul, and Deepak Hooda to score a century in T20Is for India. After Yadav’s stunning ton, Rohit’s 10-year-old tweet on him went viral on social media.

The current Indian captain had posted a tweet way back in 2011 urging fans to watch out for a talented youngster from Mumbai called Suryakumar Yadav. Rohit had said he was one to watch out for in the future.

Check out Rohit Sharma’s tweet on Suryakumar Yadav from 2011:

Just got done with BCCI awards here in chennai..some exciting cricketers coming up..Suryakumar yadav from Mumbai to watch out for in future!

Rohit has always backed Yadav even when he was not part of the Indian team and constantly motivated him to continue performing at the highest level. Yadav had once revealed Rohit advised him to ‘break the selectors’ door’ as he was not getting India call-up despite performing consistently in the IPL and the domestic circuit.

Yadav plays for Rohit-led Mumbai Indians in the IPL and has been one of the most consistent performers for the five-time champions in the last few years. He has now cemented his spot in India’s white-ball teams with his brilliant performances and looks set to be a mainstay in the middle-order at the T20 World Cup 2022 this year.