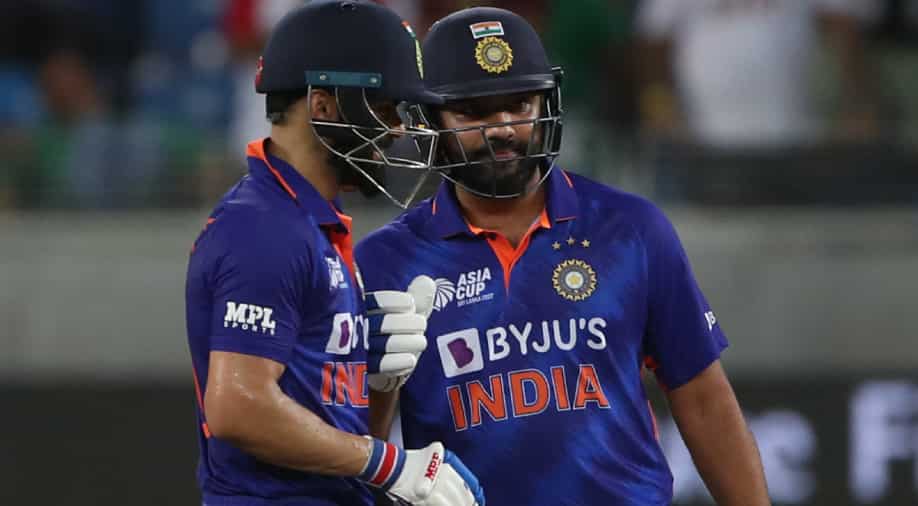 Amid rising debate over Virat Kohli’s promotion as an opener for India in T20Is, Indian skipper Rohit Sharma has said he and the team management are open to being flexible ahead of the T20 World Cup 2022 in Australia next month. Kohli has been touted by many to replace opening batter KL Rahul at the top after returning to form in the recently-concluded Asia Cup 2022

Kohli had smashed his 71st international century while opening the batting in India’s final Super Four game against Afghanistan in the Asia Cup, sparking a debate if he should continue batting at the top for the Indian team in the shortest format.

Ahead of the start of India’s three-match T20I series against Australia at home, skipper Rohit was asked if Kohli can be considered for the opening slot in the T20 World Cup. The Indian captain said Kohli is a ‘definite option’ for the team as an opener as he has done well opening for Royal Challengers Bangalore in the IPL as well.

Also Read: Imagine the amount of insecurity Rahul will be feeling: Gambhir on talks of Kohli opening for India in T20Is

“It is always nice to have options available for you. It is important going into a World Cup that you have flexibility. You want the players to be in best shape batting at any position. When we try and do something new, that does not mean that’s a problem,” Rohit said during the presser.

“For us, we understand the quality of all our players and what they bring for us. But yeah, it is an option (Virat Kohli opening) for us, we will always keep that in mind. Since we have not taken a third opener, he opens for his franchise in the IPL and he has done really well, so it is a definite option for us,” he explained.

However, Rohit insisted Rahul remains India’s first-choice opener and Kohli will only come into the picture if his performances dip in the T20 World Cup. The Hitman confirmed Kohli will be India’s third opener and might play a few matches ahead of Rahul in the showpiece event next month.

“Virat Kohli is our third opener and he will open in some of the games. In the last match of Asia Cup, we were happy with the way he played. But KL Rahul will open the batting in the World Cup, we do not want to experiment with that position a lot, his performance sometimes goes quite unnoticed,” said Rohit.

India will look to fine-tune their preparations for the T20 World Cup next month when they lock horns with Australia in a three-match T20I series starting on Tuesday. The first match will be played at the PCA Stadium in Mohali followed by the next two encounters in Nagpur and Hyderabad.