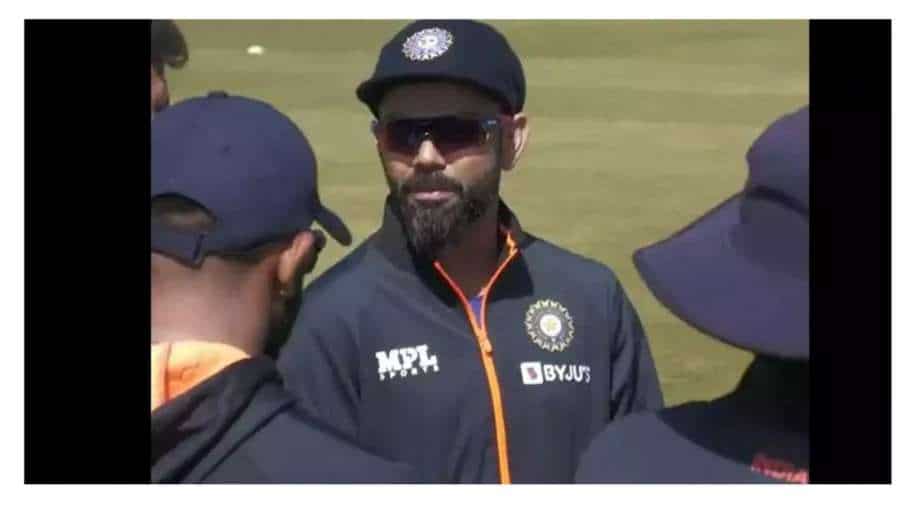 Team India’s red-ball regulars have arrived in England for the fifth and final Test versus Ben Stokes & Co., set to be held in Edgbaston, Birmingham on July 01. India’s first batch of Test players had left for England on June 16 whereas the remaining members, along with head coach Rahul Dravid, reached the country a few days back, after the completion of India’s home T20Is versus South Africa.

As India is gearing up for the rescheduled fifth and final Test versus the hosts England, ‘leader’ Virat Kohli gave a passionate pep talk in the Team India huddle ahead of the visitors’ three-day practice game versus Leicestershire, starting on June 23.

Kohli and head coach Dravid were seen having a chat with the rest of the squad. Here’s a video of Kohli’s talk:

It has been reported that the 33-year-old Kohli spoke about ‘closing in on history’, with the Indian team chasing its first Test series win on English soil since 2007. Back then, current head coach Dravid was in-charge of the side which created history by winning a three-match series 1-0.

ALSO READ | Hardik Pandya spent a lot of time with Dhoni, Virat but has his own brand of captaincy: Ex-India stumper

Talking about Kohli, he was the captain of the Indian team when the five-match Test series between India and England took place last year. Before the final Test, which was set to be held in Manchester, the Indian camp was jolted by the Covid-19 crisis and, hence, the series decider was cancelled with the visitors 2-1 up in the series.

This time around, Kohli remains a vital cog in the Indian Test line-up, who is on the cusp of creating history, but Rohit Sharma has succeeded him as all-format captain. Under Rohit, India will be desperate to go for a win or, at least, ensure a draw to return with a Test series win in England.