Kurt Zouma’s contentious header and Said Benrahma’s late penalty ensured West Ham moved up into the top half in the Premier League with a 2-0 victory over Bournemouth on Monday Night Football.

David Moyes’ side entered the game 17th in the table, but it was a position not reflective of performances, with injuries the key disruptor to their heightened pre-season ambition.

The mood music around the London Stadium has been mixed as a result of three wins in their previous 11 games caused in part by missing personnel, missed penalties and VAR misery – but here they were the beneficiaries of a change in law before those spot-kick issues were put to bed.

Jarrod Bowen’s corner was eventually glanced in by Zouma following Tomas Soucek’s header back across goal – but it was a perceived handball from Thilo Kehrer in the build-up which caused dismay among the Bournemouth players.

The result means Bournemouth drop to 14th position as the Hammers leapfrog them on their way up to 10th place.

Man of the match: Said Benrahma.

The Hammers have played more matches than any other Premier League side but having been afforded the extra rest in playing the final fixture of the weekend, fatigue could not be used as an excuse this time.

Said Benrahma was recalled to the West Ham side for the visit of Bournemouth. The Algerian winger replaced Pablo Fornals in the only change from the 1-0 defeat at Liverpool.

Bournemouth were unchanged from their midweek defeat at Southampton.

Given this was West Ham’s seventh of nine games in October – what feels like football’s moving month this year – all that Moyes will care about is that his side won against a Bournemouth outfit who appear to have contracted the Hammers’ injury curse. 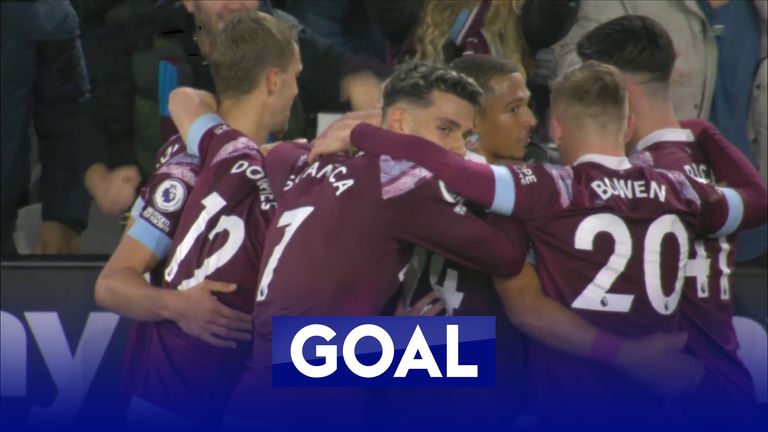 It took until 20 minutes before a meaningful chance came West Ham’s way as Flynn Downes met Ben Johnson’s cutback only to see his shot blocked but the rebound fell nicely for Aaron Cresswell to set himself and pierce his strike towards the top corner, denied spectacularly by the flying Neto.

For Bournemouth, the first half would be heavily disrupted by injuries. Adam Smith was able to shake off his knock, but Dominic Solanke pulled a muscle in having a shot comfortably saved by Lukasz Fabianski.

He was only able to continue until the stroke of half-time, by which stage goalkeeper Neto had already caused damage to his right leg following a routine clearance. Moments after Solanke was replaced by Kieffer Moore, the hosts broke the deadlock.

“The law says if it strikes the hand, it’s got to go directly to a player or his colleague to be penalised.”

Zouma marked his 200th Premier League appearance with a first goal of the season, but it was shrouded in controversy as Bournemouth felt there was a handball from Kehrer in the build-up to the defender glancing home from close range.

Eight Bournemouth players surrounded referee David Coote as the inquest began, but based on the new handball law, they did not have valid claims. Chris Mepham played the ball after Kehrer’s initial contact before Soucek’s header back for Zouma to score meant Coote and VAR Mike Dean were in no position to disallow the goal.

Neto would not reappear for a second half that rarely threatened a plot twist. Declan Rice thrashed a long-range effort that was well watched by the substitute stopper Mark Travers.

The visitors, with Kieffer Moore on for Solanke, were relying on set pieces and the Wales striker very nearly provided Jefferson Lerma with the sucker-punch but his knockdown from a long ball was glanced wide.

It was as close as they would get to an unlikely point before Benrahma added the extra gloss from 12 yards after referee Coote had been advised to consult the pitchside monitor to spot Zemura’s infringement from Coufal’s cross.

It compounded Bournemouth’s bad luck on a night just about nothing went their way. 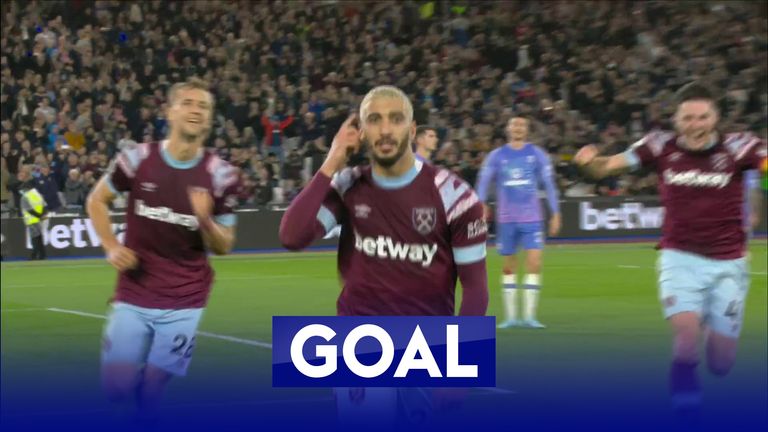 Moyes’ boys up against it to be best of the rest

“Results-wise, it wasn’t a great weekend for West Ham. Wins for Aston Villa and Leicester in addition to Southampton’s hard-fought point against Arsenal had left the Hammers looking ominously over their shoulders, just outside the bottom three.

“Last Wednesday’s loss at Liverpool meant that after 11 games, the Premier League table comprised of the traditional Big Six and Newcastle for the first time since their Saudi takeover.

“For David Moyes, perennially looking to punch through a glass ceiling into the top echelons, he will have enviably glanced at Newcastle’s statement win at Spurs to gatecrash the Champions League places.

“West Ham’s momentum was checked at Anfield, but it was a performance that warranted a point. This win propels Moyes’ side into the top half, but he will acknowledge this was an untidy performance full of flaws.

“After a summer spend that signalled lofty ambitions, however, this was a small but necessary step for West Ham to become the big-six disruptor he craves.”

“It has been a fine run for Gary O’Neil but with the clocks about to go back and winter around the corner, is reality starting to bite at Bournemouth?

“The onus was on them to beat Southampton last week, but they became the first side not to score against Saints this term.

“Those early season concerns which led to Scott Parker’s dismissal reared their ugly head in east London. Bournemouth were second-best in every department, and it was a long way back after both Solanke and Neto were forced off before the second half had started.

“In between, O’Neil was left enraged by a sense of injustice at Zouma’s goal being allowed to stand but his anger infected his own players with Jefferson Lerma and Adam Smith booked amid a ragged second-half display.

“It doesn’t get any easier for the Cherries before the World Cup with Tottenham next up at the Vitality Stadium. O’Neil will have to patch up his squad and go again. There was a bit of spirit in the second half to keep the contest alive until the last minute, before we were all mercifully put out of our misery by Benrahma’s emphatic penalty.”

Man of the match – Said Benrahma

In the absence of Lucas Paqueta – expected to be out for another two weeks – and Maxwel Cornet again missing, tonight was a golden opportunity for Benrahma to stake a claim to a regular starting berth.

The winger – signed for £30m – has struggled to nail down a starting spot since joining two years ago and the club were open to offers for him last summer. I was here when the former Brentford player produced a vibrant display against Anderlecht a fortnight ago, but inconsitency has been his main issue.

So often he indulges himself too much on the ball instead of taking the obvious option. Sometimes, less is more, and the Algerian showed he is ready to simplify his game in order to increase his end product. The penalty converted capped a fine display.

Benrahma scored his first Premier League goal of the season, while his penalty goal was his eighth shot of the match, three more than Bournemouth had as a team (5) and his most in a single Premier League game.

Alongside Soucek, Declan Rice is the only West Ham player to have featured in every Premier League minute so far this season. Given he hasn’t always been rested in the Europa Conference League, it is something Gareth Southgate will be very aware of as he keeps all his fingers and toes crossed for no further injury disruptions over the next three weeks.

He wasn’t unduly troubled in midfield as he completed 70 passes – more than any other player – against a Bournemouth that retreated into their shell after the restart. Rice also won possession 12 times – a game high – so there is nothing to suggest on this evidence he needs a rest.

Jarrod Bowen, however, was on the edges of this game and was hauled off before the end. Given his appetite for goals, he will surely have wanted the opportunity to score from the spot barely minutes after he was replaced following his missed penalty at Liverpool. It was just one of those nights for Bowen, and time is running out for him to emerge as Southgate’s wildcard pick.

West Ham return to Europa Conference League action on Thursday when they welcome Danish side Silkeborg to the London Stadium (kick-off 8pm). Bournemouth host Tottenham in the Premier League on Saturday (kick-off 3pm).