Skip to content
HomeSportsWest Indies vs India, 1st T20I: How will the weather hold up for series opener at Trinidad?

India and West Indies were involved in a closely-fought three-match ODI series, in the Caribbean island, in which a second-stringed Indian team — under Shikhar Dhawan — won 3-0. While the first two ODIs were a thriller, India won the rain-interrupted third and final match by 119 runs (DLS method).

Now, the action moves to the T20Is as both sides will now shift focus back to the shortest format with the 2022 T20 World Cup set to be held in Australia, from October-November. The five-match series opener will be held on Friday (July 29) at the Brian Lara Stadium, Tarouba, Trinidad. Even the ODIs were held in Trinidad, at the Queen’s Park Oval, Port-of-Spain. Hence, will rain once again make its presence felt and interrupt the proceedings?

ALSO READ | WI vs IND: When and where to watch West Indies vs India 1st T20I match – IST time and streaming details

For the unversed, the weather forecast in Tarouba, Trinidad for Friday is far better than what it was a couple of days back, i.e. on Wednesday (July 27). However, there still remains a 25 percent chance of precipitation during the daytime. As the proceedings will kick off at 10:30 am local time, there is expected to be a cloud cover of 31 percent. However, no humidity indicates a pleasant day on the Caribbean island. 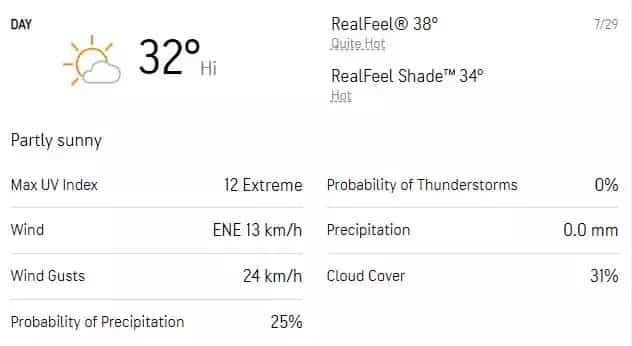 The temperatures will hover around a high of 32 degrees with a low of 26 degrees. Thus, it is going to be a hot day largely with some passing showers leading to few interruptions. Overall, a full game is on the cards.

After losing the ODIs, Nicholas Pooran-led West Indies will certainly look to settle scores with India and claim the five T20Is. For that, they will be eager to start off nicely against the visitors, who recently beat England (2-1) in their own backyard.