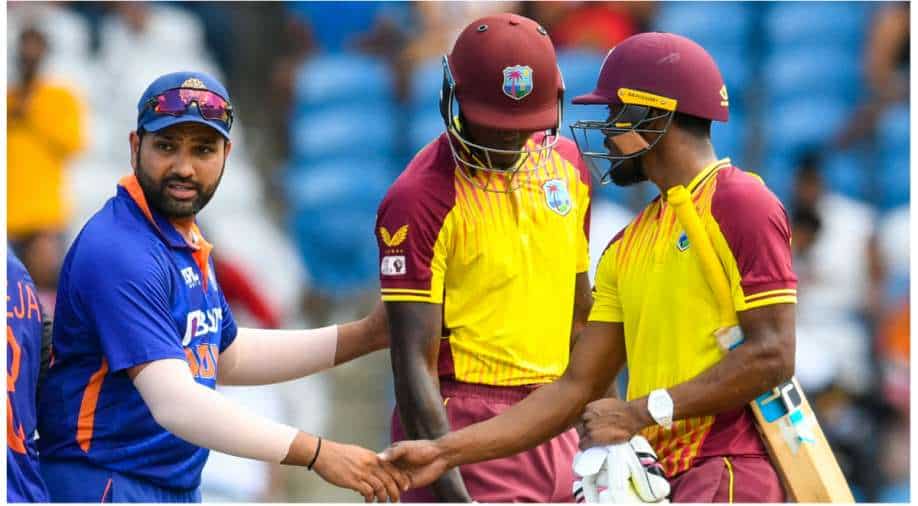 Rohit Sharma-led Team India have been on a roll in white-ball formats. After dominating their home series versus West Indies and Sri Lanka early this year, India beat England in their own den in both T20Is and ODIs, whitewashed the Windies in three ODIs with a second-stringed team at their disposal and have started the ongoing five T20Is with a bang, winning the series opener by 68 runs.

Ahead of the second T20I, in St Kitts, Rohit & Co. are on the verge of matching their arch-rivals Pakistan in a unique record. Another win over the hapless Windies in the T20I series will not only ensure the visitors a handy 2-0 lead, but Men in Blue will also be on level terms with traditional rivals Pakistan with most wins over the two-time champions in the shortest format. In this way, India is just a win away from completing 15 victories over West Indies.

ALSO READ | WI vs IND: When and where to watch West Indies vs India 2nd T20I – IST time and streaming details

Pakistan, to date, have been very dominant versus the Men in Maroon, beating them on 15 occasions in the format (most by any side versus the Windes). Hence, it seems like India will join them and eventually surpass the 2009 champions by the end of the ongoing five-match series.

India have been at their dominant best versus West Indies. As a result, they have lost only a solitary T20I match against thm in its last 13 meetings since 2017.

Will India equal Pakistan’s win-tally in the second T20I? Well, they will certainly start as favourites after an all-round display in the series opener in Trinidad, on Friday (July 29).