Skip to content
HomeSportsYou look at Novak Djokovic and Nick Kyrgios: Ben Stokes opens up on his rivalry with Virat Kohli 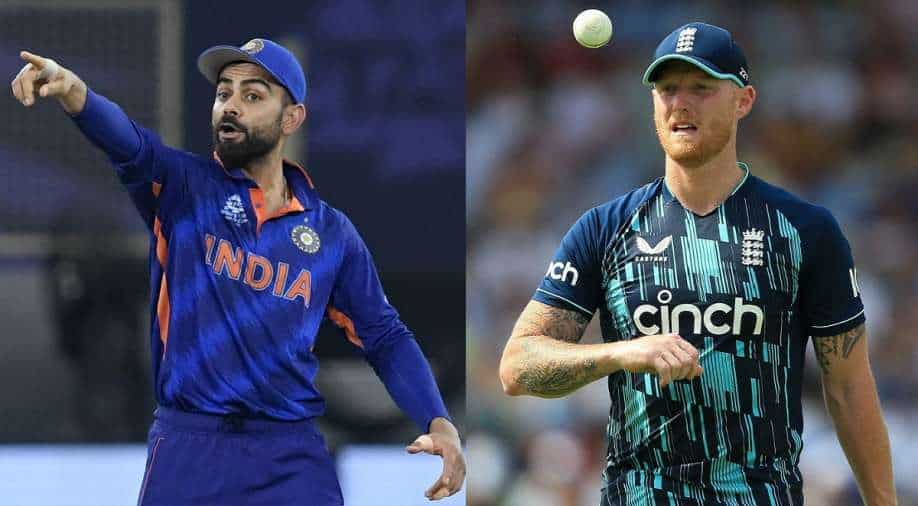 England Test captain Ben Stokes opened up on his ‘rivalry’ with Virat Kohli and said they might have a go against each other on the field but remain good friends off it. Stokes and Kohli share a great mutual respect for each other and have been driving forces in their respective teams when it comes to Test cricket.

While there is no doubting Kohli’s passion for Test cricket, Stokes has been instrumental in England’s revival in the longest format. Stokes and Kohli are two of the best in the present era and have enjoyed some fierce duels against each other over the years.

The duo was involved in some heated exchanges when India locked horns with England in the one-off fifth Test in Birmingham earlier this year. However, when Stokes later announced his retirement from ODIs, Kohli was one of the first cricketers to send him a message and called him ‘the most competitive bloke’ he has played against.

Also Read: Mouths will be shut if Virat Kohli gets a fifty in 1st game against Pakistan at Asia Cup: Ravi Shastri

Sharing an insight into the bond he shares with the former India captain, Stokes said he and Kohli haven’t come up against each other much but the duo know how to leave behind their animosity on the pitch and not let it affect their relationship off the field.

“To be honest, Virat and I don’t really come across each other that much. We’ve played Test cricket against each other and in IPL. In the time that we have spent together, albeit very small, it’s fine. When you’re out on the field, it’s me against the opposition or it’s me against an individual. You’ve got to separate the two – the on-field competition and off it.

“It’s not a case of where we are little children and when if we do have a bit of a go at each other on the field, as soon as we are off it, it’s just back to two individuals who are in the same room together, and it’s fine,” Stokes told Hindustan Times.

The England all-rounder then went on to compare his rivalry with Kohli to that of tennis stars Novak Djokovic and Nick Kyrgios, who remain good friends off the field despite sharing an intense rivalry on the court. Djokovic and Kyrgios had agreed to have dinner together after the final of Wimbledon 2022 where the Serbian ace defeated the Aussie to clinch his 21st Grand Slam title.

“Look, sport produces amazing contests not only between teams but you also have those battles and contests between individuals. But at the end of the day, there is always respect between oppositions, between individuals, and it’s just in our sports,” said Stokes.

“Just an example – you look at Djokovic and Nick Kyrgios. They have obviously had a huge rivalry but still at the end of the day, there is always that respect there between the two professional athletes. That’s the same for us and through sports.

You are always going to have a battle and trying your hardest to win a game. But when it comes to the end of it, there is always that respect and that’s what great about sport. One sportsman respects the other,” he explained.