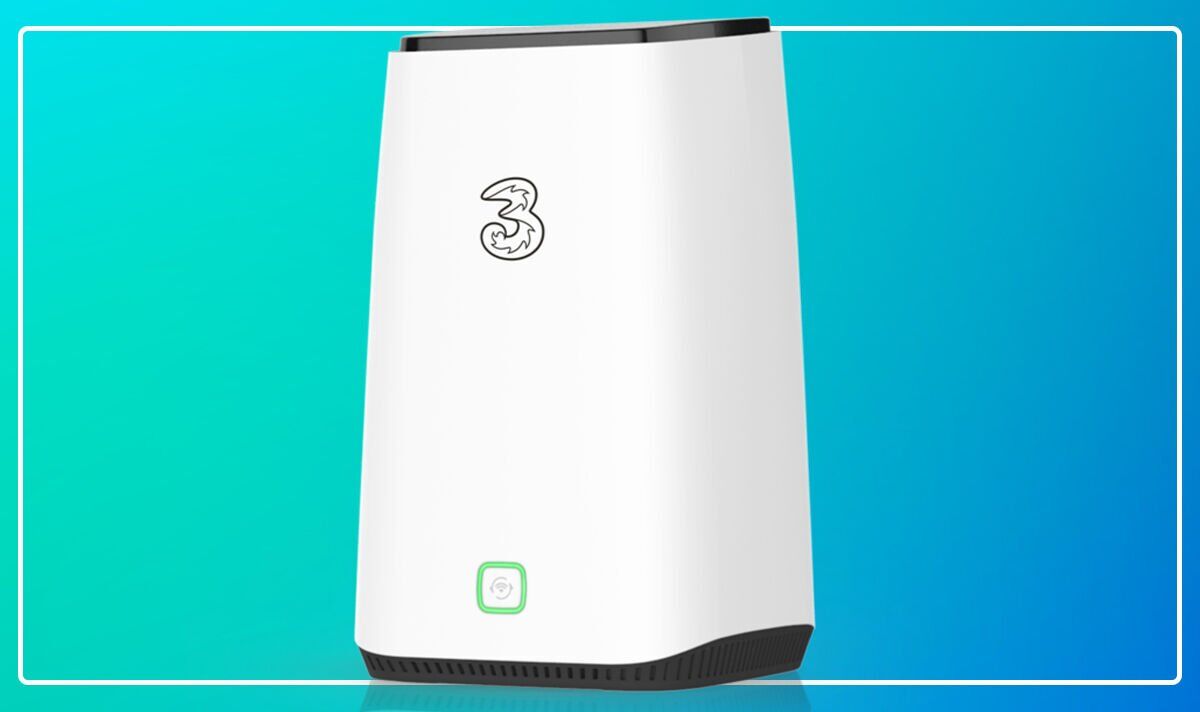 Want a brilliant broadband deal from Three Mobile? There is a stellar available right now – full-fibre broadband speeds for just £10 per month. This incredible half-price offer lasts for six months before the 5G-powered broadband returns to its usual £20 per month cost for the remainder of the 24-month contract.

With monthly bills dropping to as low as £10 per month – and download speeds of 100Mbps (30Mbps faster than the UK average home broadband) up for grabs – there’s no doubt Three Mobile has one of the best UK broadband deals around right now.

If you would like some more information on Three Mobile’s broadband offering, as well as some answers to the most commonly-asked broadband queries, scroll down for more…

Three Mobile might be better known for its pay monthly and SIM deals, but it has some truly competitive broadband offers that rank in our best broadband deals guide. Unlike Sky, BT, EE, TalkTalk and Plusnet, which all rely on BT-owned Openreach for their fixed-line broadband infrastructure – meaning you’ll be stuck with the same maximum download speeds with all of these companies, Three Mobile has a completely different solution.

The company’s Wi-Fi routers are powered by a SIM card, which taps into Three Mobile’s 4G and 5G network – just like a mobile phone. These mobile networks can unlock much faster download speeds compared to ageing broadband infrastructure in some parts of the country, with maximum download speeds of 1Gbps when connected to 5G, which is roughly 14x faster than the average home broadband speed in the UK. Everything ships with unlimited data, so there’s no need to worry about extra charges if you download gigabytes of data.

There is another advantage to this approach. Since your 5G hub is powered by a mobile network, it can be plugged in anywhere in the house. Unlike a Wi-Fi router from BT or Sky, which has to be connected to the fibre-optic cable installed during the engineer’s visit (usually in a slightly inconvenient corner of the living room or hallway…), Three Mobile’s Wi-Fi hub only needs to be connected to the mains. And that’s it.

You can pick it up and move it around the house to boost Wi-Fi signal in certain rooms, or add an extension lead to bring the Wi-Fi hub to the end of the garden to bring full-strength Wi-Fi to the garden during a summer barbecue. If you’re visiting a friend who hasn’t got their own home broadband connection – you could even take your Three Mobile Wi-Fi router with you. That’s a pretty different approach to what you’ll get from the best Virgin Media broadband and BT broadband deals.

And since there’s no need to drill holes in your walls and install a physical cable, Three Mobile is able to deliver its 5G hubs on the next working day – so you can be up-and-running with superfast new internet service within 48 hours. That’s something that you won’t be able to get from traditional fixed line broadband from BT, Sky and other competitors.

Of course, you’ll need to make sure that Three Mobile’s 4G and 5G signal is strong enough in your area. Thankfully, the company has a handy signal strength checker tool right here.

If you’re all set, we’ve rounded up the best Three broadband deals below. For a limited time, the company is offering half-price broadband bills for the first six months of your new contract, or a free Samsung laptop worth £379.

Three Mobile offers 5G and 4G home broadband. For those who don’t know, 5G provides much faster download speeds and lower latency. If you’re looking for the ultimate download speeds – similar to what you can expect from full-fibre connections from BT, Sky, TalkTalk and Virgin Media – then it’s best to plump for broadband powered by 5G. That’s because Three Mobile’s 5G network has a maximum download speed of 1Gbps – roughly 14x faster than the average home broadband speed in the UK. That speed is also faster than the top speeds currently available from full-fibre broadband plans from BT, TalkTalk and Sky, which all top out around 900Mbps.

However, there’s no guarantee that you’ll be able to get download speeds of 1,000Mbps with your Wi-Fi hub as the speeds available vary based on network coverage. Still, 5G-fuelled broadband should reliably provide enough bandwidth to stream Netflix series in crisp 4K Ultra HD picture quality without any hint of buffering. You’ll also be able to make video calls, back up your photos to the cloud, stream music, and manage smart home gadgets like video doorbells, smart speakers like Amazon Echo, wireless speakers, and more.

Another benefit of 5G networks, which are slowly rolling out across the UK, is the fact these connections are less prone to congestion whenever there is a large number of devices in a small area. Unlike 4G, which can struggle in these situations – such as festivals or gigs, there should be no drop in performance on 5G. For those relying on 5G for their home broadband, that should be reassuring.

The maximum speed that’s possible with Three Mobile’s 4G network is 600Mbps – or roughly half the maximum speed available with 5G. But while that might be the theoretical top speed, Three Mobile says that most customers should expect between 50 – 100 Mbps with the 4G hub. That’s about the same as the average broadband speed across the UK, as measured last year. It’s worth checking your current speed as this could be an upgrade compared to your current broadband plan.

Since Three Mobile doesn’t offer traditional fixed line broadband, there’s no need to worry about line rental costs either. These are also missing from next-generation full-fibre broadband, which is slowly rolling out across the UK and available from the likes of Virgin Media and BT.

For a limited time, Three Mobile has slashed the price of its 5G-powered broadband plan in half for all new customers. That means you’ll pay just £10 per month for the unlimited home broadband plan, which boasts average download speeds of 100Mbps …that’s 30Mbps faster than the average home broadband in the UK.

For those who don’t know, Three Mobile’s 5G network has a maximum download speed of 1,000Mbps, which is speedier than the latest full-fibre packages from BT, TalkTalk and Sky Broadband. The fastest broadband packages from these providers is around 900Mbps, which is still eye-wateringly fast, but falls short of what can be achieved if you live in an area with full-strength 5G signal. Three Mobile’s 5G-powered broadband is a little slower than the fastest speeds available from Virgin Media, which tops 1,100Mbps.

5G networks are slowly being rolled out across the UK, so aren’t available on every street quite yet. If you’re lucky enough to live in an area with the fastest mobile network, it could provide a broadband speed boost up to 14x faster than the average home broadband speed in the UK.