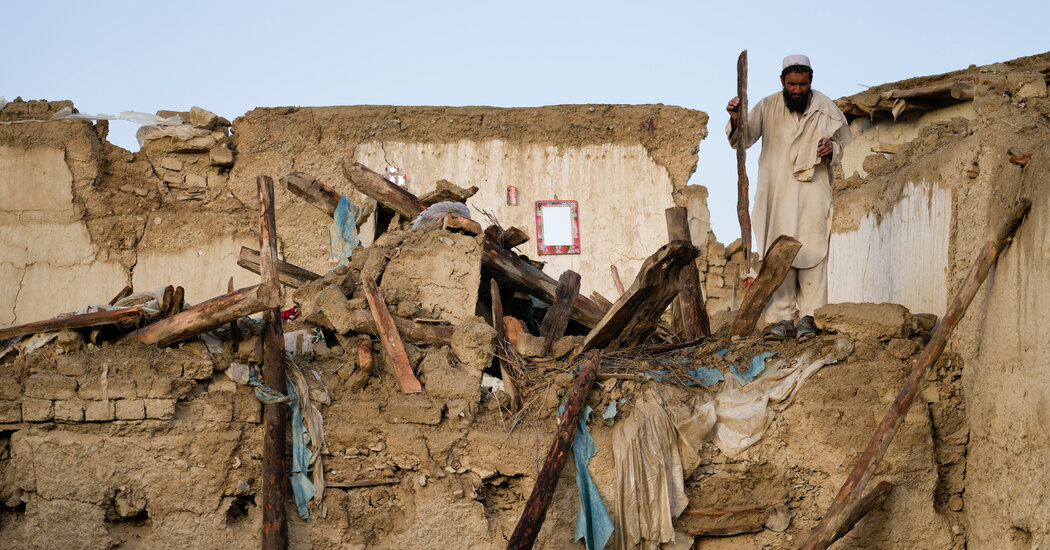 SHARANA, Afghanistan — As hopes of finding more survivors of Afghanistan’s deadliest earthquake in decades waned on Thursday, a mother lay in a hospital bed in this eastern city with her 1-year-old daughter asleep beside her in a rumpled purple dress.

Their mud brick house collapsed when the magnitude 5.9 quake struck early on Wednesday morning, and Hawa, 30, woke up choking on dust. She could feel her daughter’s chest barely moving beneath her hand.

They survived the disaster, but four of Hawa’s other children were killed along with 17 other relatives as the quake turned the mountainous, windswept region near the border with Pakistan into a tableau of death and despair.

Even as the scale of the damage was only beginning to become clear, with the first Taliban government aid helicopters bringing food and relief supplies to hard-hit areas of Afghanistan’s Paktika Province, officials said that rescue efforts were winding down, leaving little hope of finding more survivors. Attention was turning to providing aid to the injured and shelter to those left homeless by a disaster that Afghan officials said had killed more than 1,000 people.

The United Nations humanitarian office estimated that 770 people had been killed and 1,440 people injured, while cautioning that those figures were likely to rise. It said that 1,500 houses were damaged or destroyed in Gayan, one of the hardest-hit districts in Paktika.

The difficult terrain and the deep poverty in the region in Afghanistan’s southeast was posing a particular challenge to aid efforts. Some residents live in homes of clay and straw, and entire villages were believed to have been nearly wiped out in the quake. Thousands spent the night in unseasonable cold, some battered by rain, wind and even snow.

“Relief agencies’ assistance included health assistance, food, tents, and blankets, but the crisis is widespread in the area and is not enough,” said Sanaullah Masoum, a spokesman for the provincial governor in Paktika. “We call on the aid agencies to provide more food, health, and humanitarian assistance.”

Some supplies had arrived in the country, the Taliban government said, including by air from Iran and Qatar and by land from Pakistan. Zabihullah Mujahid, a spokesman for the Taliban government, said that eight truckloads of cargo from Pakistan had been delivered to the affected areas, and that further supplies had reached Kabul, the capital, and would soon be delivered to the quake zone.

The area is far from many clinics or hospitals that could help the wounded. The Afghan Defense Ministry sent seven helicopters and a medical team to transport the wounded to military and civilian hospitals, the state news agency reported. On Wednesday, about 70 people were brought for treatment to the hospital in Sharana, the provincial capital, said Dr. Hikmatullah Esmat, the public health director of Paktika Province.

They included Hawa and Safia. The quake killed Hawa’s three sons, another daughter and 17 other relatives in their village in Gayan district, she said, speaking through tears.

Through clouds of dust and darkness, Hawa could make out her father trying in vain to lift bricks that had collapsed and buried other family members. Unable to move them, he ran toward the center of the village shouting for help.

“I didn’t expect to survive,” she said from the hospital bed. For five hours, she remained trapped under a heap of bricks, bracing her left hand to keep the rubble from crushing Safia.

Five hours later as daylight broke and a heavy rain beat down on what remained of the town, residents of nearby villages began pouring into the area to try to help.

“I lost everything, my whole world, my whole family, I don’t have any hope for the future,” Hawa said, her eyes wet with tears. “I wish I had lost everything, that we had all died, because there’s no one to take care of us, to find money or food for us now.”

Mr. Masoum said that the rescue operation in Paktika ended on Wednesday evening. Local authorities in Afghanistan have told international organizations that their search and rescue efforts in the areas were 90 percent complete, and aid groups were focusing on providing shelter and care for survivors, said Isabelle Moussard Carlsen, head of the Afghanistan office of the United Nations Office for the Coordination of Humanitarian Affairs.

On Thursday, temperatures were rapidly rising, raising concerns that people who suffered through a frigid night would soon be left out in the scorching heat, Ms. Carlsen said. Lack of clean drinking water and sanitation could bring diseases in the coming days and weeks, compounding the crisis, she said.

“It’s layers and layers of aggravating factors,” she said. “After the immediate lifesaving response, these communities will take a long time to recover. There was already very high vulnerability in the area.”