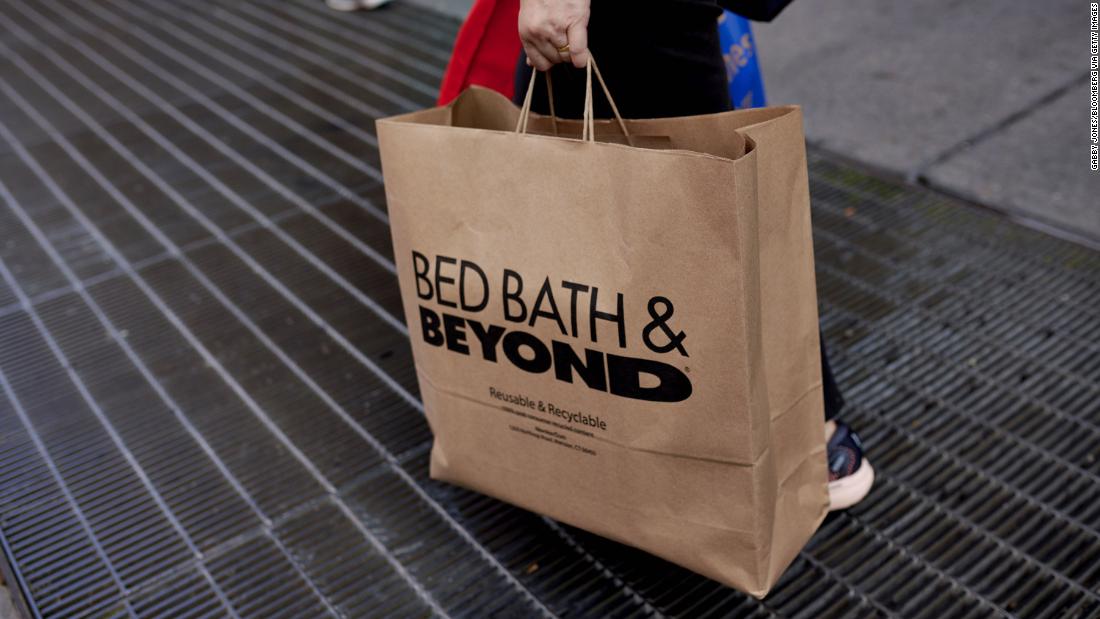 The chain said Wednesday that it will lay off approximately 20% of corporate employees, close around 150 stores and slash several of its in-house home goods’ brands.
Crucially, the company also said it secured more than $500 million in financing to shore up its ailing financial straits.
Berna Barshay, an independent retail analyst, said the company’s moves were the “prototypical rearranging deck chairs on the Titanic” and the business was in structural decline.
Shoppers in recent years have switched to other chains such as Target (TGT), while the novelty of Bed Bath & Beyond’s beloved coupons has faded because consumers can easily find cheap prices on Amazon (AMZN) and other online sites. Shares of Bed Bath & Beyond (BBBY), which has become a volatile “meme stock” in recent years, fell 20% in early trading Wednesday.
The announcements, part of a “strategic update,” came just days after a key investor dumped almost his entire stake in the company and reports surfaced that some Bed Bath & Beyond suppliers halted shipments due to unpaid bills.
Bed Bath & Beyond also said Wednesday that sales at stores open for at least one year plunged 26% during its latest quarter.
In June, the company announced that CEO Mark Tritton, who joined from Target (TGT)in 2019 to try to turn things around, was being pushed out. Tritton spearheaded growing the chain’s own brands, a strategy that worked at Target, but failed to catch on at Bed Bath & Beyond.
The company said Wednesday that it was reversing this strategy. That means national brands will be featured more prominently, rather than its own brands. Three of its brands will also face the chopping block, including Studio 3B, Haven and Wild Sage.
But major brands may be reluctant to give Bed Bath & Beyond their best stuff, Barshay said.
Bed Bath & Beyond is “financially up against the wall, so it’s going to be harder to stay in stock from key vendors,” she said. “If you’re Dyson and Keurig and you’re trying to maintain a halo over your brand, the last thing you want is discounting.”