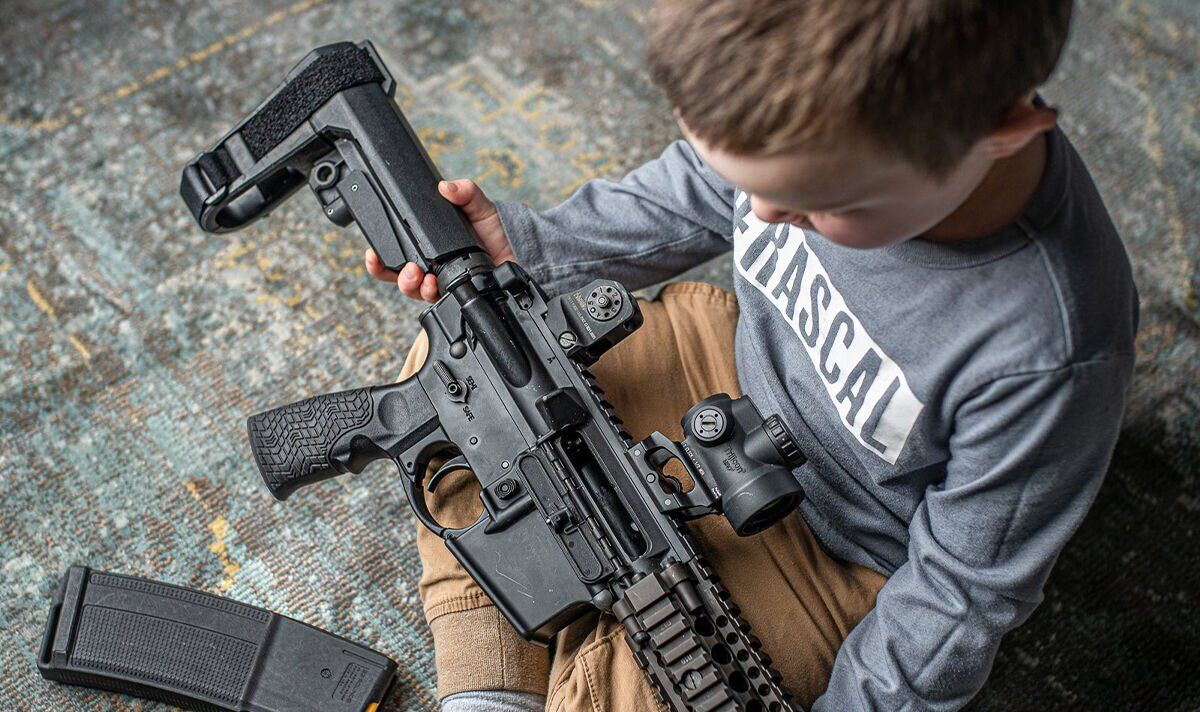 The shooting, at a primary school in south Texas, United States, took the lives of 19 young children and two adults. As the latest massacre in the long history of gun violence in America, it has put the country’s laws on the use of firearms under the spotlight. Condemnation has been widespread among celebrities and commentators, including YouTuber Ethan Klein, who took to Twitter to expose the company supposedly behind the weapon used by Salvador Ramos, the 18-year-old named by Texas Governor Greg Abbott as the suspect.

The picture is accompanied by a message that reads: “Train up a child in the way he should go, and when he is old, he will not depart from it.”

Mr Klein, who hosts the h3h3Productions channel with wife Hila Klein, said of the post: “This is the company that sold the shooter an AR-15 a week before the shooting, all online. Absolutely vile.”

According to the Daily Dot, one of Ramos’s friends on Instagram shared a screenshot that Ramos had sent showing a receipt for a gun he bought from Daniel Defense.

Investigators said the suspect had an AR-15 as well as a handgun and high-capacity magazines. However, it has not been independently verified whether Ramos purchased the AR-15 or any other of the items at Daniel Defense.

Local media report Ramos may have been a high school student in the area.

One former classmate of his who was not identified told CNN he and Ramos were somewhat “close” and used to play Xbox together, adding that the suspect was a fan of Call of Duty.

The Washington Post claimed Ramos was “bullied” as a child, with one pupil telling the publication his lisp made him a target, while others said he endured gay slurs and was made fun of because of the way he dressed.

Pete Arredondo, Uvalde Consolidated Independent School District Chief of Police, said the shooting began at 11.32am local time, and that investigators believe the attacker “did act alone during this heinous crime”.

A predominantly Hispanic school, it sits in the city of Uvalde, around 85 miles west of the city of San Antonio.

The Texas Governor said the teenager abandoned a vehicle before entering the school to “horrifically, incomprehensibly” open fire.

Saying he was “sick and tired of it”, he told a television briefing: “Don’t tell me we can’t have an impact on this carnage.

“I spent my career as a senator and vice president working to pass common-sense gun laws.

“We can’t and won’t prevent every tragedy, but we know [these laws] work and have positive impact – when we passed the assault weapons ban, mass shootings went down. When the law expired, mass shootings tripled.”

He continued: “The idea that an 18-year-old kid can walk into a gun store and buy two assault weapons is just wrong. What in God’s name do you need an assault weapon for, except to kill someone?”

Connecticut Senator Chris Murphy, who represented the area of Newtown at the time of the Sandy Hook horror, made an impassioned speech in which he asked for meaningful changes to gun laws, too.

The senator told Congress: “We have another Sandy Hook on our hands.

“What are we doing?

“I’m here on this floor to beg, to literally get down on my hands and knees and beg my colleagues.

“Find a path forward here. Work with us to find a way to pass laws that make this less likely.”