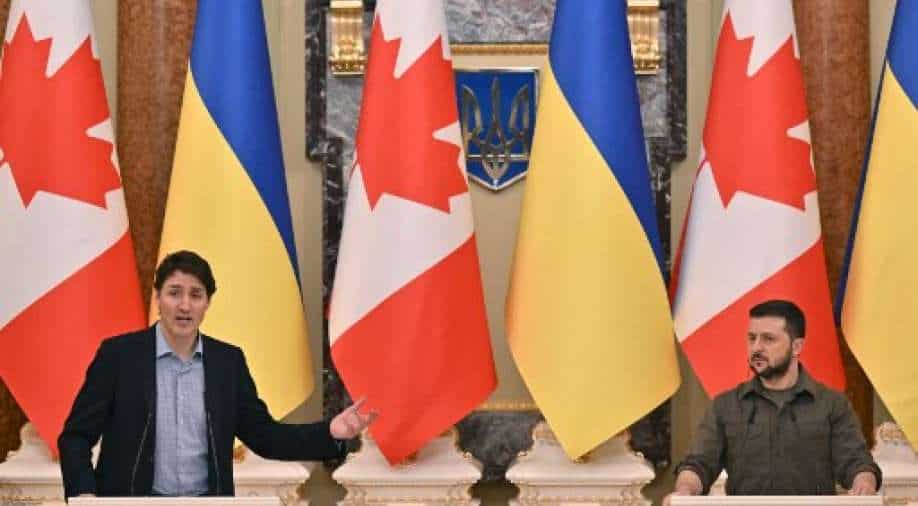 The two leaders held a press conference as Trudeau said: “It is clear that Vladimir Putin is responsible for heinous war crimes.”

I’m in Ukraine with @cafreeland and @melaniejoly today. We’re here to show our support for Ukraine and its people. Our message to President @ZelenskyyUa and Ukrainians is this: Canada will always stand shoulder to shoulder with Ukraine. More to come on our visit.

The Canadian prime minister added that “there must be accountability” while asserting that he had  “witnessed first-hand the brutality of Russia’s illegal war”.

Trudeau also raised the flag at the Canadian embassy in Kyiv.

“Canada will always stand shoulder to shoulder with Ukraine,” Trudeau said in a tweet, adding, “We’re here to show our support for Ukraine and its people.”

The Canadian prime minister had informed earlier that he had spoken to US President Biden as the two leaders “focussed on Russia’s illegal invasion of Ukraine” and the “ongoing coordinated response”.

Irpin Mayor Oleksandr Markushyn said PM Trudeau “came to Irpin to see with his own eyes all the horror that the Russian occupiers had done to our city.”

“He saw — not military facilities — but burned and completely destroyed homes of Irpin residents, who until recently enjoyed life and had their own plans for the future,” Irpin’s Mayor added.