Elon Musk is infamous for his constant tweeting and this time, he has tweeted about his possible death. With the billionaire’s takeover of Twitter for $44 billion dominating headlines at the moment, Musk tweeted that he may die ‘under mysterious circumstances’ sparking a lot of chatter on the site.

“If I die under mysterious circumstances, it’s been nice knowin ya”, the Tesla CEO tweeted.

However, the tweet did not go down well with his mother and former supermodel Maye Musk who was visibly angry with it and even replied to the tweet saying “That’s not funny”.

Musk was quick to apologise as he said “Sorry! I will do my best to stay alive”.

The tweet from Musk comes only a day after he posted a note on Twitter where former Russian Prime Minister Dmitry Rogozin accused him of associating with Nazis. Musk also said that Rogozin had sent a note to Russian media accusing him of arming “fascists”.

This was in connection to Musk’s decision to send Starlink hardware to maintain the internet connection in various Ukrainian cities during the ongoing conflict with Russia. 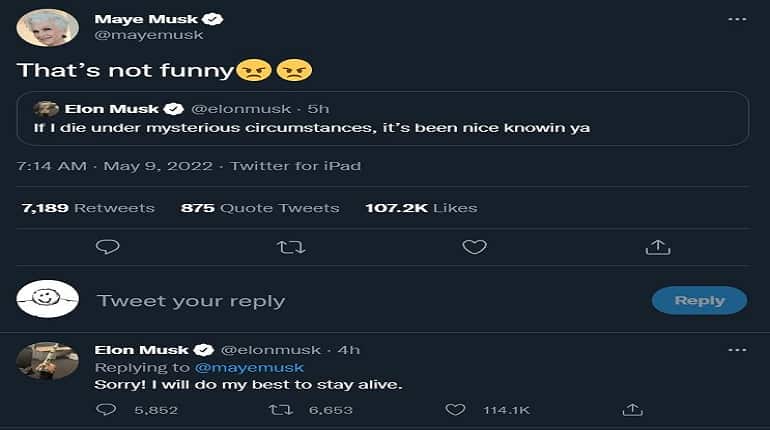 “From the testimony of the captured chief of staff of the 36th Marine Brigade of the Armed Forces of Ukraine, Colonel Dmitry Kormyankov, it follows that the ground-based subscriber equipment of the Starlink satellite company Elon Musk was delivered to the militants of the Nazi Azov Battalion and the Marines of the Armed Forces of Ukraine to Mariupol by military helicopters,” the note read.

“According to our information, the delivery and transfer to the Armed Forces of Ukraine of PO boxes for receiving and transmitting the Internet from Starlink was carried out by the Pentagon. Elon Musk is thus involved in the supply of fascist forces in Ukraine with military communications. And for this you will have to answer in an adult way, Elon, no matter how you turn on the fool,” it added.