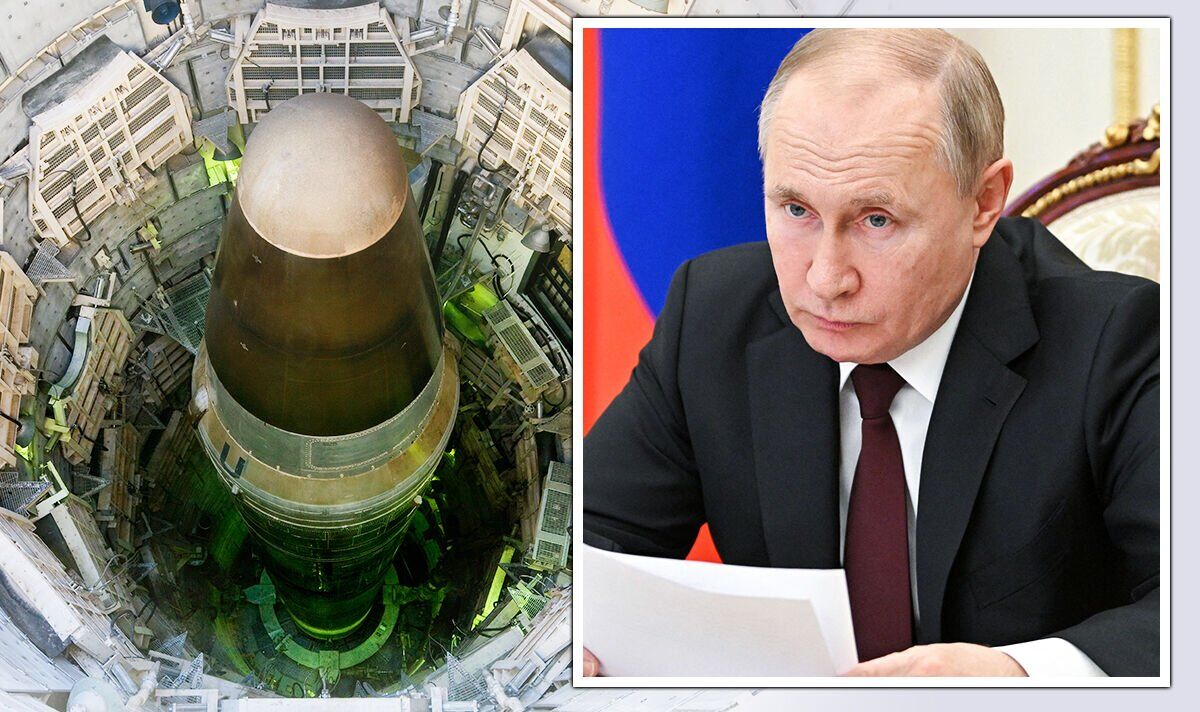 The spectre of nuclear war has hung over the conflict in Ukraine since Russia invaded its former Soviet neighbour on February 24. Within days of the invasion, Putin claimed to have put Russia’s nuclear forces on high alert – the first time Moscow had issued such a threat since the Sixties. Since then, the nuclear sabre rattling from Russia has continued, with Foreign Minister Sergei Lavrov warning last week that the risk of nuclear war is now “considerable” due to the UK and other Western nations arming Ukraine to defend itself against Russia.

Another recent threat came from Dmitry Kiselyov, a TV host on Russia’s state-controlled broadcaster Channel One, who threatened the UK with nuclear Armageddon.

Nuclear war is now the “likeliest since the Sixties”, according to Volodymyr Ishchenko, a research associate at the Institute of East European Studies at Freie Universität Berlin.

Speaking to Express.co.uk, the Ukrainian political expert addressed fears that the world has returned to an era of Cold War tensions like those between the US and the Soviet Union, which reached an all-time high with the Cuban missile crisis in 1962.

Asked about the risk of nuclear war, he said: “I think it’s possible. It is the likeliest since the Sixties.

“Maybe even more likely than in the Sixties because the Cold War actually prevented the escalation to nuclear war.”

JUST IN: Putin ‘doubling down’ in Ukraine as Russia ‘can’t afford to lose’ war

During the Cold War, US-Soviet tensions built up gradually in the decades following World War 2.

The two sides formed de facto codes of conduct and elaborate arms control treaties, with no side ever pressing the nuclear button.

But the current US-Russian tensions appear more unpredictable, and there is the added curveball of Russia’s main global ally China, which does not want to get caught up in the conflict or western sanctions.

Mr Ishchenko claimed that part of the reason Russia has made the nuclear threats is because of the leverage Putin believes it has militarily.

He said: “Now there is the problem of the lack of any regulations in terms of how the US and Russia and China are treating each other.

“I don’t know what kind of person does not believe that he cannot do this after what he started in Ukraine.

“A nuclear world war is a real-life possibility. We should do anything to prevent it.”

Despite Russia’s threats, there is no “practical evidence” that it will use nuclear weapons in the war with Ukraine, according to the US Central Intelligence Agency (CIA).

CIA chief Bill Burns, who entered the role in 2021, said on Saturday that Putin is “stewing in a very combustible combination of grievance and aggression”.

However, the Russian President has not yet moved to deploy his nation’s deadliest weapons, the CIA chief told a Financial Times conference.

He said: “We don’t see, as an intelligence community, practical evidence at this point of Russian planning for the deployment or even potential use of tactical nuclear weapons.”

However, he warned that Russia’s second phase of the war in eastern Ukraine is “at least as risky” as and possibly “even riskier” than the first.

He claimed Putin is “in a frame of mind in which he doesn’t believe he can afford to lose; so the stakes are quite high in this phase”.