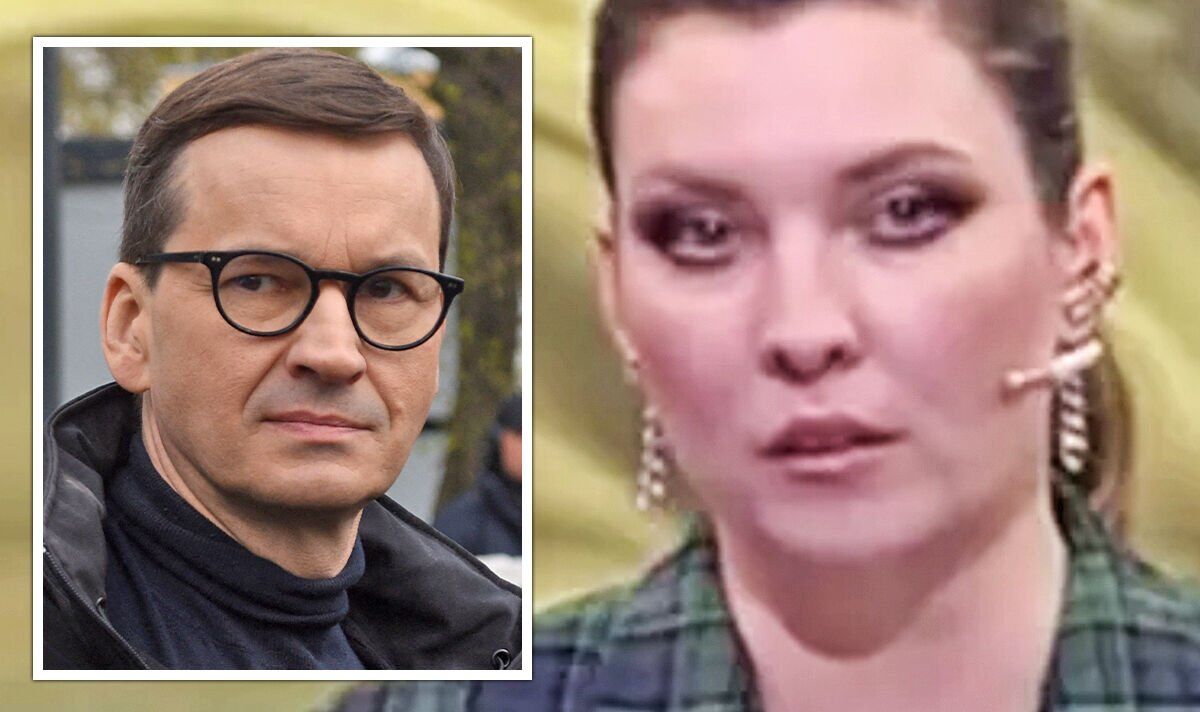 Russia has suddenly escalated its war rhetoric against Poland, as one state TV host threatened Warsaw with a “loss of independence”. The language used by Russian propagandist Olga Sakabeyeva to describe Poland mirrored the language used to justify President Putin’s invasion of Ukraine in February. While President Putin has defended his invasion of Ukraine as an attempt to “de-nazify” Ukraine, Ms Sakabeyeva said that the same “fascist terror” was gaining momentum in Poland now too.

Speaking on state-owned TV channel Russia-1, Ms Sakabeyeva, also known as the “Iron Doll of Putin” in the West, issued her chilling threat to Poland.

She said: “Meanwhile the fascist terror is now gaining momentum not just in Ukraine but in Europe too.

“The Prime Minister of Poland Mateusz Morawiecki has said that the Russian world poses a threat to all of Europe.

“What’s more, Morawiecki called for the full destruction of that ‘monstrous idealogy,’ which in his words, is a ‘cancer’.”

The television presenter continued: “That is, history doesn’t teach people anything.

“After all, thanks to such self-satisfied and arrogant idiots, Poland has already on several occasions ceased to exist as an independent state.”

Her remarks were a direct criticism of Polish Prime Minister Morawiecki’s op-ed in The Daily Telegraph where he said Vladimir Putin’s idea of a “Russkiy Mir” (Russian world) was “a cancer”.

He said that President Putin’s idealogy “poses a deadly threat to the whole of Europe”.

Mr Morawiecki said the vision was akin to 20th-century “communism and Nazism,” adding that the West “must root out this monstrous new ideology entirely”.

Kremlin spokesperson Dmitry Peskov reacted to the Polish PM’s remarks, saying that this “is the quintessence of that hatred towards Russians that has regrettably, like a metastasis, infected the entire Polish leadership and, in many ways, Polish society”.

Samuel Ramani, an expert at the University of Oxford, tweeted in response to the clip: “These overt threats are in response to Mateusz Morawiecki’s anti-Russian comments.

“It reflects a buildup in anti-Polish rhetoric, which includes efforts to drive a wedge between Poland and Ukraine, and conspiracies about a Polish annexation of Lviv.”

Ms Sakabeyeva’s remarks are not the only anti-Polish threats in Russian media this week.

Oleg Morozov, a Russian lawmaker, said on Telegram that Russia may seek to “denazify” Poland.

On Monday, the Russian ambassador to Poland was splashed with red paint by protesters.

Russia has demanded an official apology and warned of “further steps” if it is not satisfied with Poland’s response.