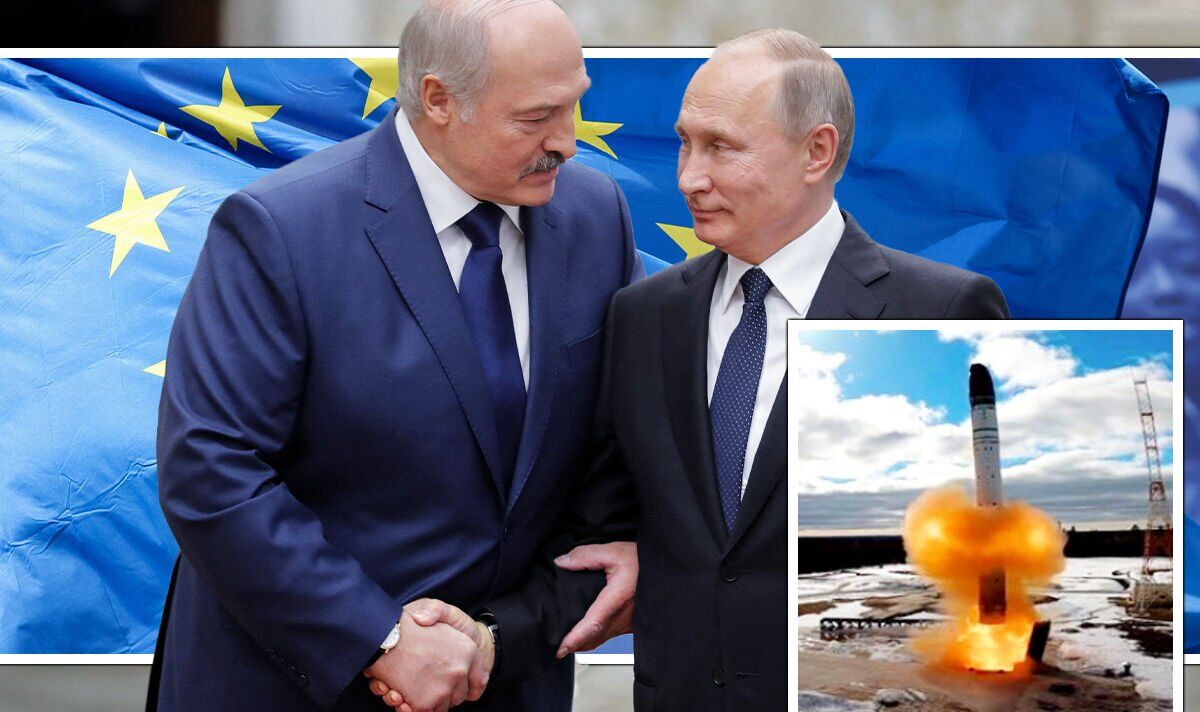 Belarus President, Alexander Lukashenko, is considered one of Putin’s most reliable allies. When Russia invaded Ukraine, Moscow used Belarusian territory as a springboard for its assault on Kyiv.

But the Belarusian strongman leader may have another use in Putin’s eyes as the Ukraine war continues to drag on, according to Dr Yuri Felshtinsky.

Dr Felshtinsky, author of ‘Blowing up Ukraine: The Return of Russian Terror and the Threat of World War III’, told Express.co.uk that, should Putin resolve to launch a limited nuclear strike, he would likely use Belarus as a proxy to distance Russia from the likely fallout.

Following the collapse of the Soviet Union, Minsk handed its nuclear weapons to Russia.

Belarus then signed up to a non-proliferation agreement in 1993, and all nuclear weapons were removed from the country by 1996.

But Dr Felshtinsky said Putin’s “only support” in Ukraine “is from the arsenal of nuclear weapons”.

Dr Felshtinsky then explained to Express.co.uk: “Some time ago, Belarus withdrew from its non-nuclear status, and Lukashenko made several statements that they will ask the Russian government to return nuclear weapons back to Belarus.”

He continued: “We might see [nuclear] strikes against Ukraine, Lithuania and Poland from Belarus, not from the Russian Federation with the hope the retaliation would be against Belarus, not against Russia.”

“I am not saying we will or you will bring nuclear weapons there tomorrow, but this is no joke.”

Putin then responded: “The Belarusian Army has a fairly big number of Su-25 planes. They can be respectively re-equipped.”

He then added: “As we had agreed on the issue you raised, a decision was made in our country: within the next several months, we will transfer to Belarus the Iskander-M tactical missile systems, which are known to use both ballistic and cruise missiles, both conventional and nuclear.”

However, as Russia’s attempts to take Ukraine showed slow progress, Lukashenko warned of the nuclear “abyss” that would open up if the conflict took on a nuclear element.

He said: “Let’s stop and then we will figure out how to go on living.

“There’s no need to go further. Further lies the abyss of nuclear war.

“There’s no need to go there.”

Putin himself seemed to embark on an unexpected U-turn earlier this month, commenting that “there can be no winners in a nuclear war and it should never be unleashed”.