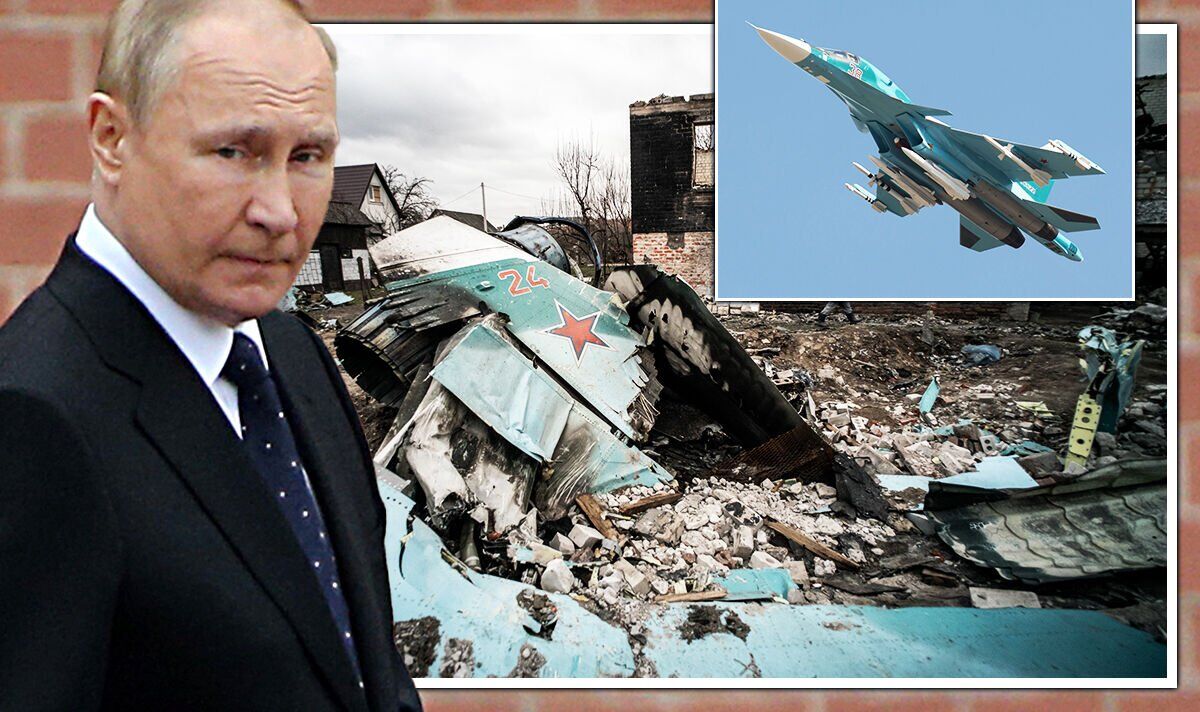 Ukrainian media on Monday reported a $36million Russian strike aircraft had accidentally been downed by Putin‘s military, with footage shared by the Strategic Command of the Armed Forces of Ukraine on Telegram appearing to show its destroyed remains.

The jet was was said to have been downed near Alchevsk, a city in the Luhansk region – one of the areas the war is currently focused on.

The cameraman of the video shared on Telegram can be heard saying a Ukrainian plane had been shot down. However, an inscription on the military plane states it belongs to Russia’s Air Force, local news outlets clarified.

Ukraine’s dialog.ua reported: “Russian invaders from the air defence shot down their own plane, which was flying in the sky over Alchevsk.”

It added that it could have happened on Sunday, when Kyiv launched a targeted attack on military depots in the occupied city of Alchevsk, approximately 45 kilometres from the Luhansk Oblast capital.

According to national outlet Glavred, a video of the downed jet was published on local Telegram channels, and Russians at first commented on the posts believing the plane in question was Ukrainian. Then, after it became clear it was a Russian bomber, the footage was reportedly deleted from the messaging app.

It first flew in 1990, intended for the Soviet Air Forces, before entering service in 2014 with the Russian Air Force.

Alchevsk, currently under the occupation of Moscow-backed separatist forces, has seen further attacks by Ukrainians.

According to the rebels, High Mobility Artillery Rocket Systems (HIMARS) rockets provided to Ukraine by Washington killed two civilians and damaged a bus depot and several other buildings in the city over the weekend.

Ukraine’s armed forces said they struck the bus depot because they had information it was being used to house Russian troops.

Ukrainian officials say new US-made HIMARS they began receiving last month allow them to reach targets in Crimea, which was annexed by Russia in 2014, and other areas occupied by Russia.

Andriy Yermak, chief of staff to Ukraine’s president, on Sunday published a video showing a large explosion which he said was another destroyed Russian ammunition depot in southern Ukraine.

DON’T MISS
Europe in flames: Fires force thousands to flee homes [INSIGHT]
One thing you should NEVER do to keep energy bills down revealed [WARNING]
German fury as Russia profits from BILLIONS since war began [ANALYSIS]

He wrote on Telegram: “Good morning from HIMARS.”

HIMARS can land an artillery shell on a spot the size of a dinner table from 60 miles away, bringing Russian ammunition depots into range.

In Moscow’s first official admission of the devastating impact the long-range artillery weapons are having on Russia’s military aims, the Kremlin ordered its troops to prioritise destroying US arms in Ukraine.

Moscow said Sergei Shoigu, the Russian defence minister, had last week visited soldiers fighting in Donbas for the second time in three days and ordered the commander “to prioritise the destruction” of HIMARS, which are credited with destroying more than a dozen Russian ammunition depots lying miles behind the front line.

Shoigu’s visit to Russian units is thought to have been intended to boost morale amongst forces fighting in Donbas.

On Saturday, the official handed out medals at an army headquarters and ordered soldiers to get back to fighting after a break.

Ukrainian military officials, meanwhile, have warned Russia is preparing for the next stage of its offensive in the country.

They said Putin’s men appeared to be regrouping units for an offensive towards Sloviansk, a symbolically important city held by Ukraine in the eastern region of Donetsk.

The UK’s Ministry of Defence added that Russia is also reinforcing its defensive positions across the occupied areas in southern Ukraine.