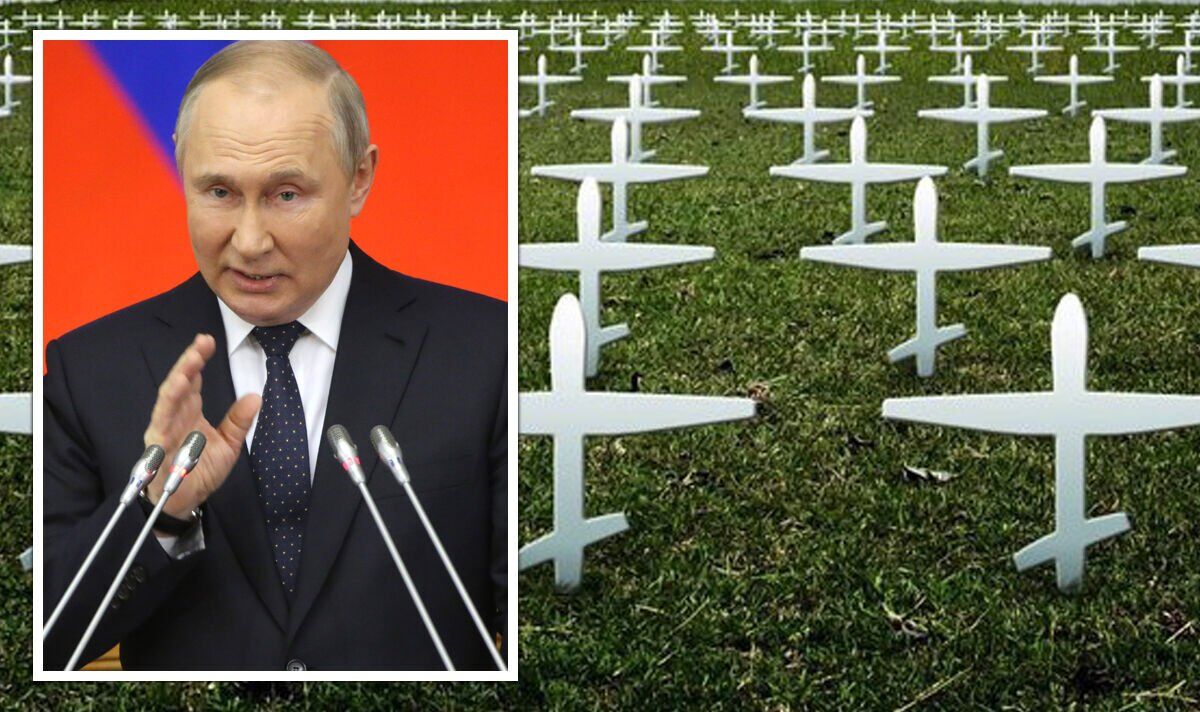 The Defence of Ukraine warned the Russian President the war torn nation was “taking out all garbage from our earth and skies”. To add insult, the forces attached a picture of a mock graveyard showing hundreds of drones. They posted on Instagram: “300+ russian drones will never serve the occupiers again.

“We are taking out all garbage from our earth and skies.

It comes as Ukraine continues to put up a fight against Russian troops days and weeks after Putin began his illegal invasion on February 24.

Russian forces were last night battling for control of the last Ukrainian stronghold in the besieged city of Mariupol, while the EU proposed its toughest sanctions yet against Moscow, with a phased oil embargo.

After failing to capture the capital Kyiv in the early weeks of an assault that has killed thousands and flattened cities, Russia has accelerated attacks on Ukraine’s south and east, where the Azov Sea port of Mariupol is its main target.

Russia declared victory over Mariupol on April 21 after weeks of siege and shelling.

The city is key to Moscow’s efforts to cut Ukraine off from the Black Sea – vital for grain and metals exports – and link Russian-controlled territory in the south and east.

Over 300 civilians were evacuated from Mariupol and other areas in southern Ukraine as part of a joint UN-Red Cross operation that concluded on Wednesday.

But Mariupol authorities warned some 200 civilians, as well as Ukrainian fighters, are still holed up in a vast network of underground bunkers in the Azovstal steel plant, which has suffered repeated bombardment from encircling Russian troops.

Civilians who were evacuated to safety this week under a United Nations-led deal voiced fear for those still trapped inside.

Evacuee Tetyana Trotsak, who was among dozens of Ukrainians who reached the Ukraine-controlled town of Zaporizhzhia on Tuesday, said: “God forbid more shells hit near the bunkers where the civilians are.”

Meanwhile, piling pressure on Russia’s already battered $1.8 trillion economy, Brussels has proposed phasing out imports of Russian crude oil within six months and refined products by the end of this year.

The plan, if agreed by all 27 EU governments, would follow US and British oil bans and be a watershed for the world’s largest trading bloc, which remains dependent on Russian energy and must find alternative supplies.