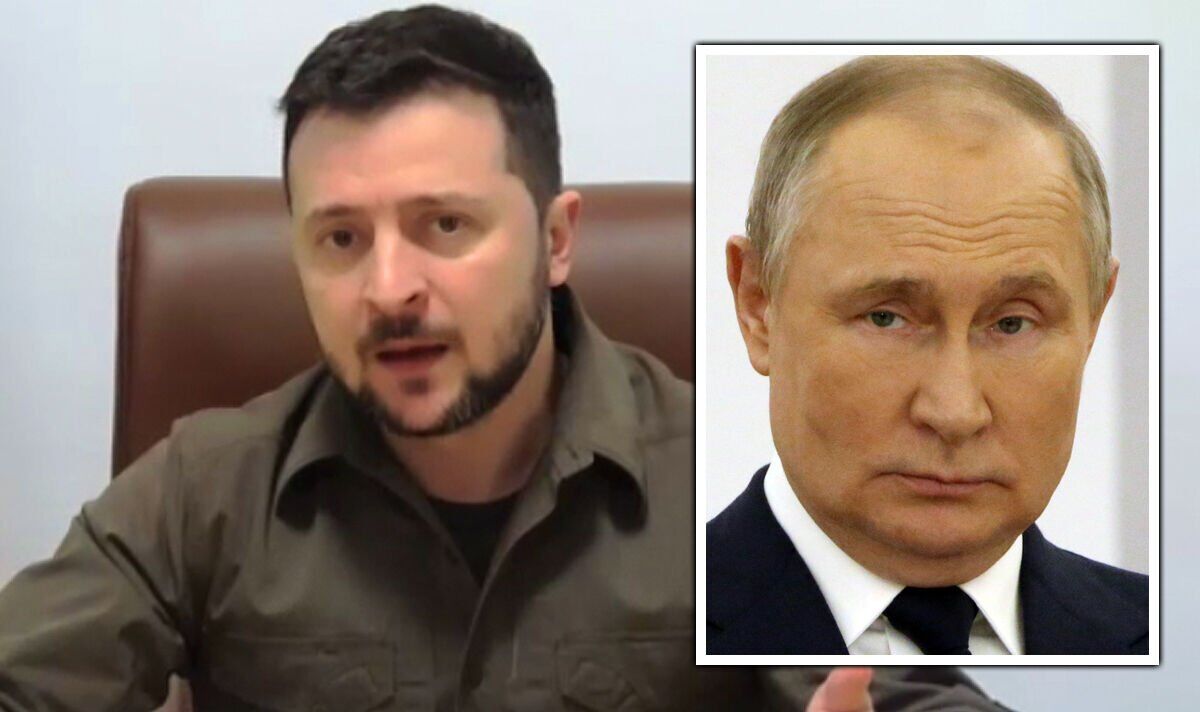 Ukraine’s President also said the south-eastern port city of Mariupol had been “destroyed completely” – and condemned what he called the “cruelty” of Russian forces throughout his country. Mr Zelensky, speaking during a webinar organised by the Chatham House website today (Friday), said: “They do not believe that they can be made responsible for the war crimes because they have the power of the nuclear state and the nuclear blackmail after many decades.

“We can see this put bluntly by the Russian propaganda-mongers. They are calculating how much time is needed for nuclear missile to hit the European capitals.

“They’re talking about that openly. How they can make a nuclear blast in the ocean to wash away in the British Isles. With the infographics, they boast of Russia being capable of turning any state into nuclear ashes – that’s what they say literally, nuclear ashes.”

Such dangerous rhetoric was the result of a feeling of “impunity”, suggested Mr Zelensky.

Without naming names, he explained: “There are some politicians in Europe still which are not ashamed of their relations after all Russia did in Europe.

“The response of the world should be instantaneous. But in fact it takes months for us to discuss the same things again and again. For example the oil embargo on Russia.”

Looking ahead, he said: “This is the 72nd day of the fully fledged war and we can see no end of it yet and we cannot feel any willingness of the Russian side to end it.

“This is not a military event. This is torture. This is terrorism and hatred.”

Mr Zelensky also suggested the area would be of little use to Russia anyway, even if Ukrainian forces were to surrender.

He explaining: “It is already devastated. There is no structure. It is all destroyed completely.”

Addressing world leaders directly, Mr Zelensky said: “This is about Ukraine, but it is essentially about your own country.

“This will be our joint victory, not only over Putin but the terrorism he has spread. This is about uniting humankind around this idea.”

The only leader Mr Zelensky mentioned by name was German Chancellor Olaf Scholz, who he urged to visit his country from talks in Kyiv, suggesting such a trip could take place on May 9 – the day Russia celebrates its annual Victory Day.

Asked whether Ukraine is satisfied with the support it has received, especially from EU nations such as Germany, and what he would say to Mr Scholz if he had the chance to speak with him, Mr Zelensky said: “You cannot be slightly evil and slightly good.

“With the right hand you impose sanctions, with the left hand you sign the Russian contracts. This is not right. This is hypocrisy.”

He added: “I think Chancellor Scholz, for him … he’s invited – the invitation is open, it’s been for some time now. He’s invited to come to Ukraine. He can make this very powerful political step to come here on May 9, to Kyiv.

“Sometimes in history we have to make certain steps for unity, even if there is some kind of coldness in specific relations.”