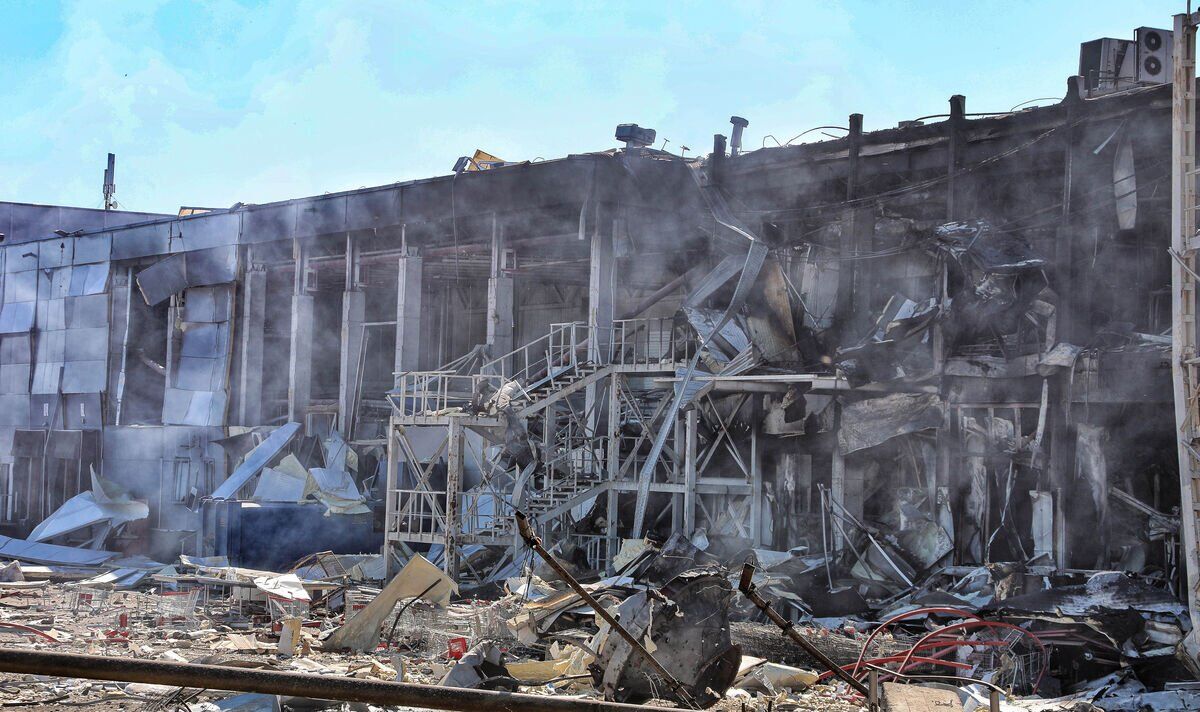 Ukraine also remained in control of the second city of Kharkiv. A senior US official said Putin is about a fortnight adrift of the schedule in his mission in those areas. The source, who spoke on condition of anonymity, said: “We would assess that he is easily two weeks or even maybe more behind where he thought he wanted to be.”

The onslaught in the south intensified yesterday with fresh missile attacks on Odesa leaving a shopping centre a flaming scene of devastation. Meanwhile, there was a renewed assault on the steelworks in Mariupol.

But Moscow’s growing frustration is starting to show, with even Putin’s own propagandists no longer turning a blind eye to the military’s failures and openly criticising them.

Vladimir Solovyov, one of Putin’s most-prominent backers, labelled the length of time it is taking for weapons to reach the front as “shameful”.

The TV presenter also fumed that Russian troops were unable to get drones because so few are being produced, and those that were made took too long to get into battle.

He mocked: “Just try to bring something to the Donbas. It’s easier to bring it in via Ukrainian customs in Lviv. They let any weapons through.” Guests on Russian state TV talk shows complained that men were being sent into battle “with weapons of yesteryear” and the country’s economy could not sustain the war.

Mikhail Khodaryonok, a retired Russian colonel, admitted even a much-feared general mobilisation of forces would do little to turn the war in Moscow’s favour.

He said it lacks equipment and men to build new units, adding: “We don’t have the reserves.”

Aleksandr Sladkov, who posts pro-Kremlin material online, accused commanders of being “shamefully indecisive” saying their attacks “can’t push out Ukrainian forces” because they are fighting “one to one” with no numerical advantage.

Meanwhile, evidence of Russian atrocities continued to be uncovered.

Oleg Sinegubov, head of Kharkiv regional military administration, said: “The bodies of 44 civilians were found in the temporarily occupied Izyum from under the rubble of a five-storey building destroyed in March.

“This is another war crime of Russian military against the civilians.”

But there were successes for the Ukrainian army near Kharkiv yesterday with its forces recapturing villages north and north-east of the city. Yet in the South, smoke filled the Odesa streets after three missile strikes rocked the city on Monday night following four that hit during the day.

One person was reported dead and five others hospitalised. Emergency services were left fighting multiple blazes at two sites, with firefighters filmed treading through the rubble of what used to be a shopping centre and a warehouse.

The attacks happened on the same day the President of the European Council had been visiting the city.

Charles Michel said he had seen silos full of grain, wheat and corn in Odesa that was ready for export – but were blocked. And the growing threat to global food security was something that was highlighted by Ukraine President Volodymyr Zelensky in his nightly address.

He said that without his nation’s exports dozens of countries were “already on the brink of food shortages” and that the situation could start to “become frightening”.