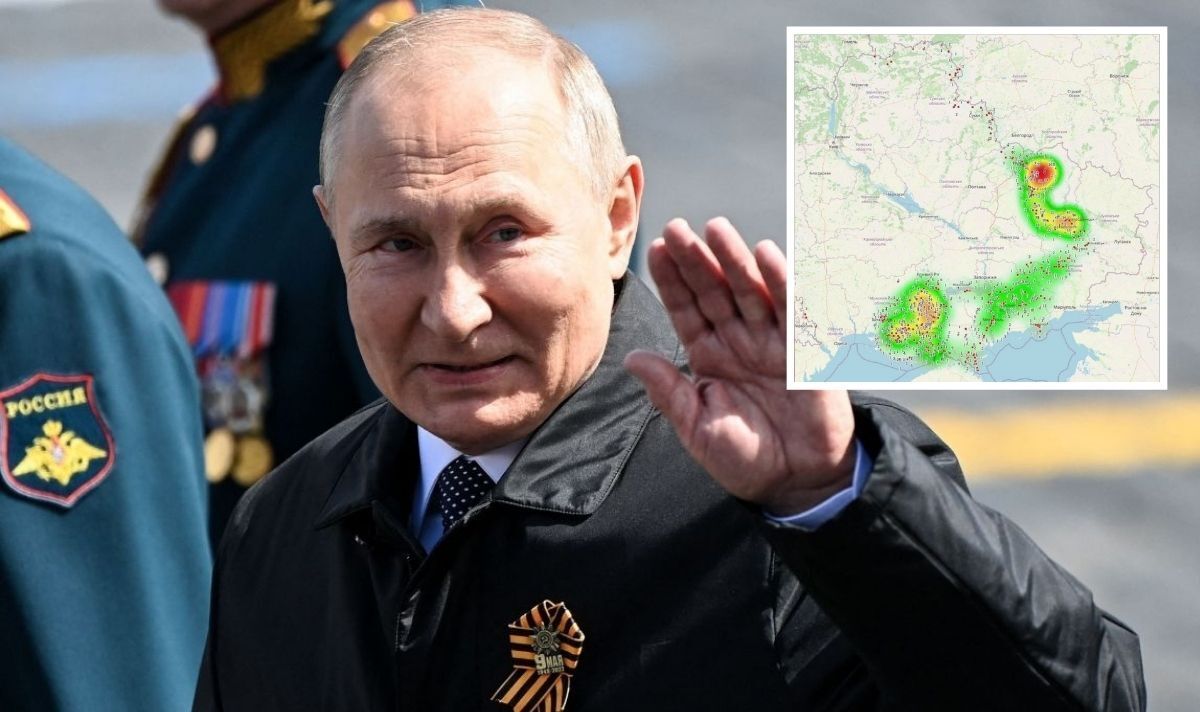 The map – shared by Dr Mike Martin – shows the hotspot of Putin’s invasion on Ukraine, with the majority of SIMs found in the east and south of the country. When speaking about the release of the map, Dr Mike said: “No wonder they [Russia] have been so successfully targeted if that is their comms security.“Just shockingly poor for a modern-day army to be that lax.”

He added: “Gives you a good idea of the concentration of their forces.”

It is now the 78th day of the Russia-Ukraine war, after Russia invaded Ukraine on February 24.

Since the invasion, Ukraine forces have retaken large areas around the capital after Russian forces abandoned their push towards Kyiv.

Russian troops are still advancing, with them predominantly invading from the south east.

Putin’s army initially made strong advances in the south, with their main objective being the creation of a land corridor between Crimea, which it annexed in 2014, and areas held by Russian-backed separatists in Dontetsk and Luhansk.

But Ukraine held their own, as the troops received strong resistance from Ukrainian forces near Mykolaiv in the west and in Mariupol in the east.

The French Minister of Foreign Affairs, Jean-Yves Le Drian, said Putin made four major mistakes during his attack on Ukraine, including underestimating the Ukrainian forces.

When talking about the “four mistakes” Putin had committed during his attack, he said: “His first was thinking that Ukraine would fall easily.”

The French Minister also stressed the “global misjudgement” of the Russian President on the situation in Ukraine, saying that Putin also underestimated the European response and solidarity within the Atlantic Alliance.

In the west, Russia had aimed to take control of Odesa and cut off Ukraine’s access to the Black Sea, but its forces were blocked by the Ukrainian army in Mykolaiv and forced back south.

The Russian troops are continuing their efforts to reinforce its troops on Snake Island in the Black Sea but have been stalled by Ukrainian forces striking the Russian air defences.

Despite the Russian forces retreating from Kyiv, the devastation caused has left many questioning who will pay the estimated £60million costs.

According to Kyiv, the costs mount to €70million (£59.7m) following the invasion that has left thousands homeless.

Kyiv Mayor Vitali Klitschko said on Tuesday some 390 buildings have been damaged in Kyiv since the beginning of the war.

He wrote on his Telegram channel: “As a result of Russian military aggression in the capital of Ukraine, a total of 390 buildings have been damaged. Of these, 222 are apartment buildings. In the city, shelling and bombing damaged 75 educational institutions, of which 30 are preschools, 17 are health care centres, 11 are cultural institutions.”

Last month, the Ukrainian government said it will seek reparations from Russia in the aftermath of the war.

The new map that has come to light now offers Ukraine an advantage, with the concentration of the SIMs allowing them to track troops and predict next moves.