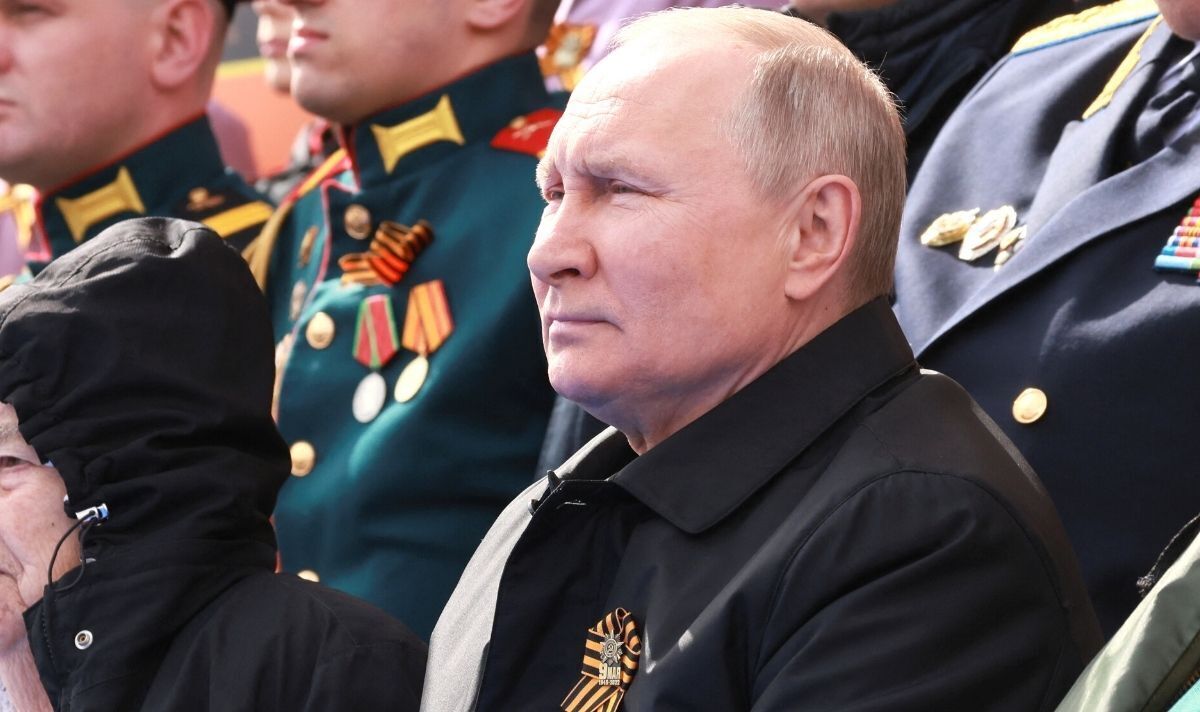 Admiral Sir Tony Radakin commented on the heavy blanket wrapped around Russian President Vladimir Putin’s legs during the Victory Day parade in central Moscow today. He said that it was an “interesting detail”, before remarking that there have been “regular rumours of ill health in Putin” of late. He claimed that the likes of Emmanuel Macron and the Americans, who have spoken directly to Putin, have reported that the President does not seem his entire self after two years of covid-enforced non-engagement with the Russian public.

Admiral Sir Tony said: “Yeah, the heavy blanket is an interesting detail. There have been regular rumours of ill health in Putin, which of course have not been acknowledged by the Kremlin.

“But he has been locked away as a result of Covid for the last two years and is only now having to re-engage.

“Those people who have spoken to him, people like Macron and the Americans, have reported back less coherence than they are used to getting from him.

“So there are reasons to be worried about him. But we need to be a little bit careful about what we wish for.

“If he fell under a bus, if he is genuinely ill, there is no reason at all to believe that whoever replaces him will be in any way preferable from our point of view.”

In his Victory Day speech on Monday, Putin accused the West and NATO of creating an “unacceptable threat” to Russia by way of justifying the invasion of Ukraine.

Speaking in front of a packed Moscow audience, with a wide display of Russia’s military power behind, Putin accused the United States “and their junior partners” of supporting Ukrainian neo-Nazis.

He said: “In December last year, we proposed the conclusion of an agreement on security guarantees.

Russia called on the West to enter an honest dialogue, in search of reasonable compromise solutions, to take each other’s interests into account. It was all in vain.

“NATO countries did not want to listen to us, meaning that they in fact had entirely different plans, and we saw this.

“Openly, preparations were underway for another punitive operation in Donbas, the invasion of our historical lands, including Crimea.

“In Kyiv, they announced the possible acquisition of nuclear weapons, the NATO bloc began actively taking military control of territories adjacent to ours. As such, an absolutely unacceptable threat to us was systematically created, and moreover directly on our borders.

“Everything indicated that a clash with the neo-Nazis, the Banderites [Ukrainian Nazi sympathisers], backed by the United States and their junior partners, was inevitable.”

Ukraine LIVE: Britain threatens to FINISH Putin [LIVE]
The Russians were always as bad as the Nazis and they continue to prove [INSIGHT]
Putin’s own mouthpiece admits riots could erupt ‘tomorrow’  [REVEAL]

Rumours have emerged within Russia that Putin might be suffering from cancer and have to undergo surgery that could incapacitate him.

One video on the channel alleges that Putin held a two-hour “heart-to-heart” with his close confidante Nikolai Patrushev about his health.

He apparently told the former chief of the Federal Security Service (FSB) that he might need him to take over for a few days while Putin recovers from surgery.