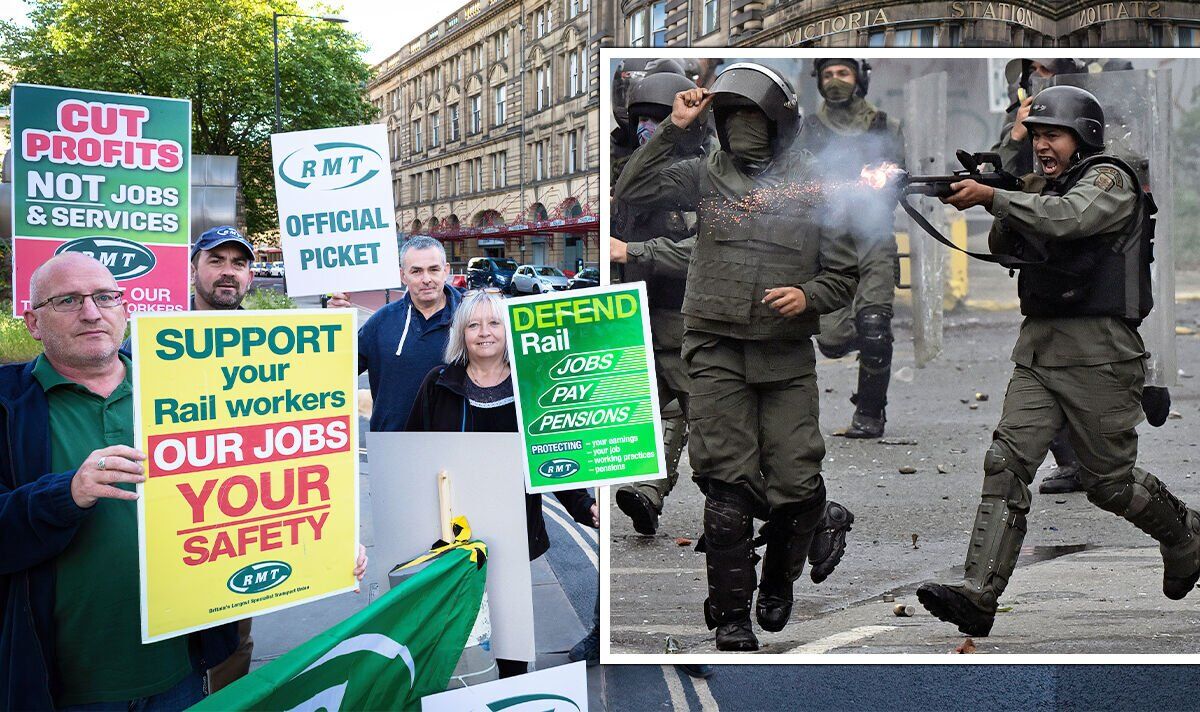 Around half of the rail network in England, Wales and Scotland was shut down on Thursday due to the second strike of the week. It comes as negotiations between the National Union of Rail, Maritime and Transport Workers (RMT) and the Government broke down on Wednesday. The largest rail strikes since 1989 have left millions of passengers stranded after around 40,000 RMT members working for Network Rail and 13 train operators first joined the picket lines on Tuesday. There are more walkouts are planned for Saturday, with major disruption also expected on Friday and Sunday.

Talks remain ongoing between the Government and the RMT to resolve a dispute over jobs, pay and conditions.

A look at the history of the trade union shows that it has allied itself with Nicolás Maduro’s dictatorship in Venezuela.

The politician was elected President of the South American nation in 2013 following the death of his socialist predecessor, Hugo Chávez.

However, under Maduro’s administration, living standards for regular Venezuelans have declined as the economy has gone into freefall.

Meanwhile, Maduro’s administration has politically silenced his opponents, and protestors have disappeared or been killed.

The Venezuelan leader’s presidency is disputed after his re-election in 2018 was widely considered to have been rigged.

The country is now run by two men after National Assembly leader Juan Guaidó, backed by the US, declared himself President in 2019.

Despite Maduro running the country into the ground, he still retains some support in the UK.

In 2013, another RMT general secretary Bob Crow warned the union’s members of “attempts by Venezuela’s right-wing to undermine democracy and destabilise the country in the run-up to the local elections”.

Amid their support of Maduro, many left-wingers have remained silent on his regime’s human rights abuses.

Investigators from the United Nations Human Rights Council have discovered what they believed amounted to crimes against humanity committed by the Venezuelan state authorities.

A Human Rights Watch report in 2020 said: “The government of Nicolás Maduro and its security forces are responsible for extrajudicial executions and short-term forced disappearances and have jailed opponents, prosecuted civilians in military courts, tortured detainees, and cracked down on protesters.

“They used a state of emergency implemented in response to COVID-19 as an excuse to punish dissent and intensify their control over the population.”

They said: “The British left has a curious affection for authoritarian regimes, obsessing over the latest goings on in Venezuela or Cuba.”

They added: “The RMT is no exception. A senior RMT official visited separatists in eastern Ukraine before the recent invasion; its store sells t-shirts pledging solidarity with Cuba.”