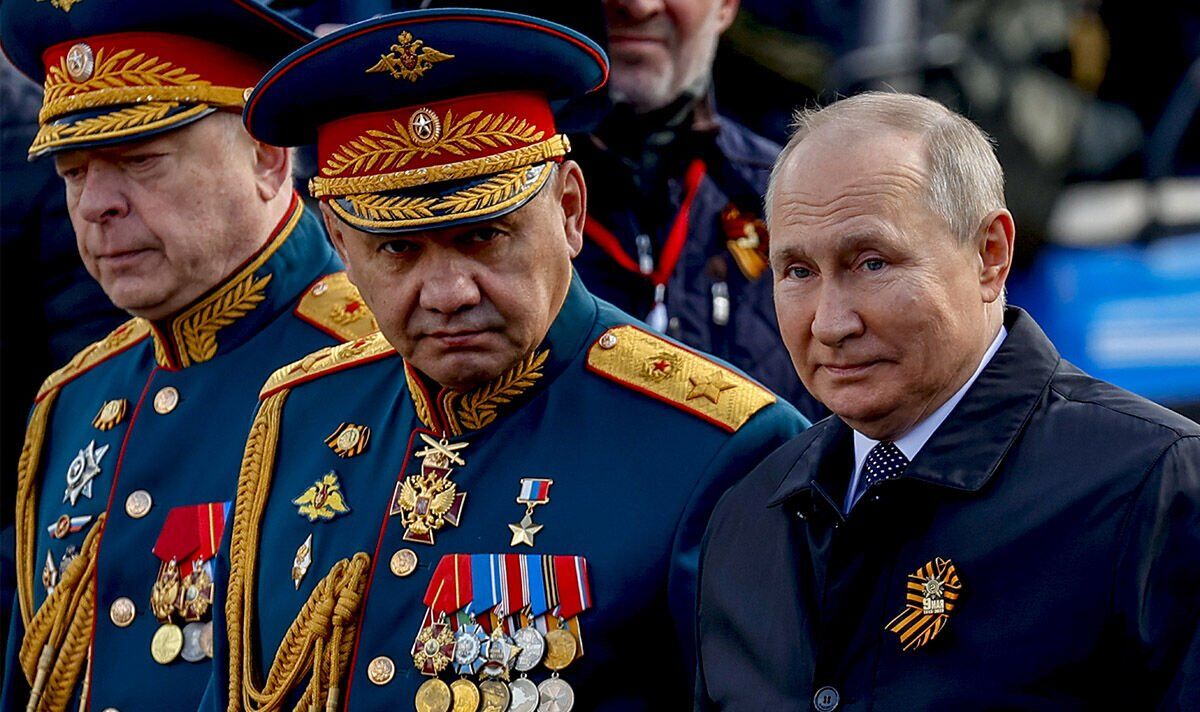 Russian President Vladimir Putin used his Victory Day speech On Monday to attack the West and continue to paint the “special military operation” in Ukraine as warranted. But despite the pomp and ceremony on show at the parade marking the Soviet victory over Hitler, reports show that cracks are beginning to show in the Kremlin. Speaking from the Red Square parade, Putin said: “Russia called on the West for an honest dialogue, to search for reasonable, compromise solutions, to take into account each other’s interests. “All in vain. The NATO countries did not want to hear us, which means that in fact they had completely different plans.

“The danger grew every day. Russia gave a pre-emptive rebuff to aggression. It was a forced, timely and the only right decision. The decision of a sovereign, strong, independent country.”

Putin claimed that his country is fighting for their motherland in Ukraine, but beyond the bluster, it appears those close to the president are realising that Russia’s military is failing.

Professor Mark Galeotti, director of the Mayak Intelligence consultancy and author of The Weaponisation of Everything, writing in the Sunday Times last week said that while Putin will try to paint the invasion in a positive light, it is becoming increasingly difficult to fool those within his own ranks.

He said: “While professional soldiers appreciate the money Putin has lavished on the military, there is often a wariness about the way he has also used them to burnish his own legend — and a belief that his ignorance of military matters might be a problem.

“There has long been a sense that he put political convenience above military sense.”

He added: “There are many who know perfectly well the war is not going well — and who understand that however much Putin might like to pin the blame on his generals or security chiefs, the real reason is that he decreed an ill-conceived and underprepared operation based on unrealistic assumptions about Ukraine and its people’s will to resist.

“In the process he squandered not only Russia’s best chance to deliver a devastating opening blow, but many of its best troops too.

The Russian military’s struggles in Ukraine have been laid bare by some troubling statistics.

It is unknown exactly how many Russian soldiers have died in the conflict so far, but one report at the end of April suggested the figure could be as many as 25,900, according to a call intercepted by Kyiv.

In the call, a Russian soldier was said to have made the admission: “The official tally is one thing, but I’ll tell you now – 25,900 have died. That’s in two f***ing months.”

A transcript of the call was claimed to have been posted online by Ukraine’s secret service.

Ukraine has claimed that 22,800 Russian soldiers have been killed, while the UK’s official figures say the number stands at 15,000.

On 25 March Russia’s defence ministry said that 1,351 Russian soldiers had been killed and 3,825 wounded since Moscow launched what it calls its “special operation” in Ukraine on 24 February.

The Ukrainian Ministry of Defence claims 1,122 Russian tanks have been destroyed as of May 7 2022 from a total of 2700 main battle tanks at the start of the war, according to the IISS (International Institute for Strategic Studies).

More evidence for Russia’s failings in Ukraine came from a former British sniper, who told i that the Kremlin’s forces were “embarrassing”.

“The fact they are leaving convoys in the open for the Ukrainians to obliterate.

“I have never seen something so embarrassing. The Taliban were better fighters than the Russians. They are surrendering in their droves. It’s embarrassing.

“For the second-largest army in the world, it is a joke. I have seen prisoners surrendering, I have seen Russian soldiers faking epilepsy attacks to get in the back of civilian ambulances in the hopes of getting out.”