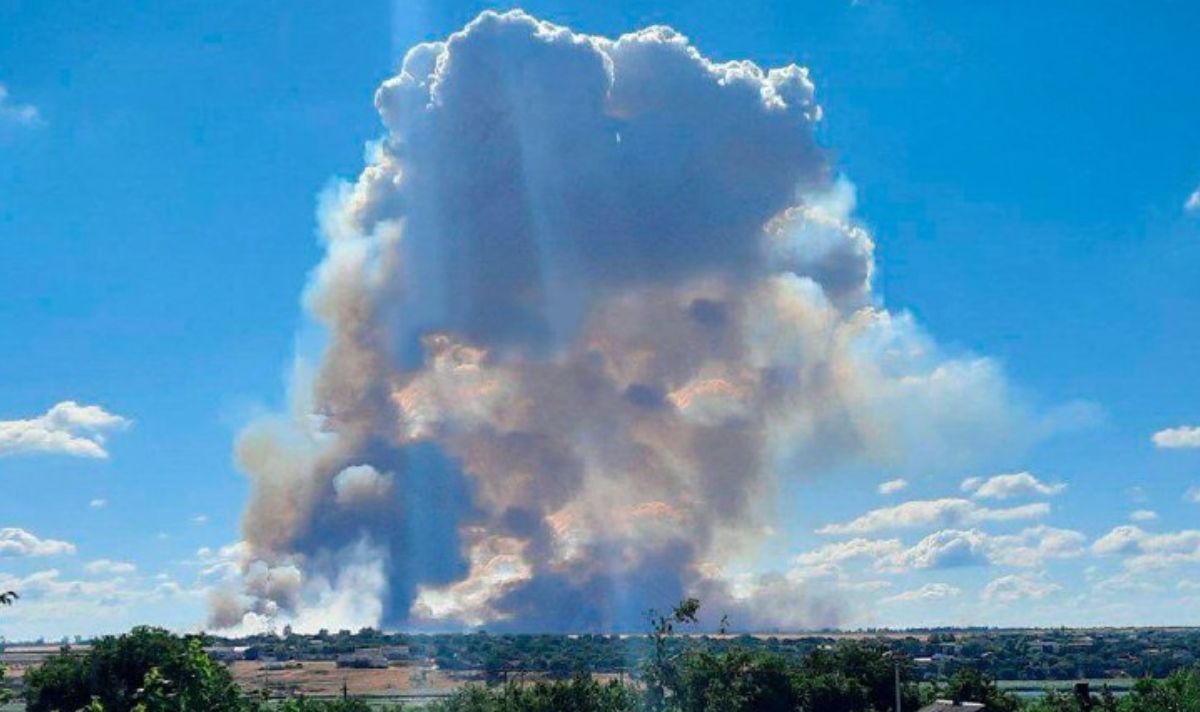 Ukrainian forces hit two military checkpoints and a landing in the second strike this week on a Russian-held area in southern Ukraine, officials have announced. In a photo shared by the Strategic Communications Directorate of the Ukrainian army, which appears to have been taken miles away from the attack, a massive cloud looks to have erupted from the explosion.

Kyiv said that Russian soldiers were seen fleeing the scene “in panic”, some even putting on civilian clothes and boarding public transportation.

The Russians reportedly rushed to take large bags filled with looted objects and belongings with them, as the howling of the sirens was heard.

The picture was shared on the office’s official Telegram account, captioned: “In the Kherson region, a warehouse with “saltpeter and humanitarian aid” is on fire again.

“Also, in the area of the explosion, you can hear the howling of sirens and the commotion of orcs who are fleeing in different directions and hastily taking away both the loot and what they brought with them.

READ MORE: Italy risks ‘destabilising Europe’ as Draghi to be ousted after revolt

“Local residents report that some of the orcs in a panic change into civilian clothes and pack with large bags into cramped civilian transport. To be continued!”

An attack on the city of Nova Kakhovka in the Kherson region killed 13 “occupiers”, Serhiy Bratchuk, spokesperson for the Odesa regional administration, quoted the Operational Command South as saying.

Moreover, two people were killed when Ukrainian forces shelled a bus station in the separatist-held city of Donetsk in eastern Ukraine, according to a separatist leader said.

Ukraine has put in use multiple-launch rocket systems provided by NATO allies to combat the Russian forces.

A Ukrainian general stated today that the country is using Western-supplied weapons and 155mm “smart” shells to hit Russian ammo dumps and supply lines, forcing Moscow to rethink how it supplies fuel and ammunition to the front line.

POLL: Would you install a heat pump to save the planet?

A top Russian official said on Thursday that Moscow would respond positively should Kyiv be ready to resume peace negotiations, but that Ukraine must accept the “territorial realities” of the situation, the Interfax news agency reported.

Earlier today, Russian forces launched missiles at two schools in Kharkiv. As of now, there have not been any reported casualties.

Shocking video footage from a previous attack has shown the moment Russian missiles hit a university in the Ukrainian city of Mykolaiv, which left at least two people wounded.

Mykolaiv mayor Oleksandr Senkevych posted on social media: “This time, they hit Mykolaiv around 7:50 a.m., knowing full well that there were already many people on the streets at that time. Real terrorists!”