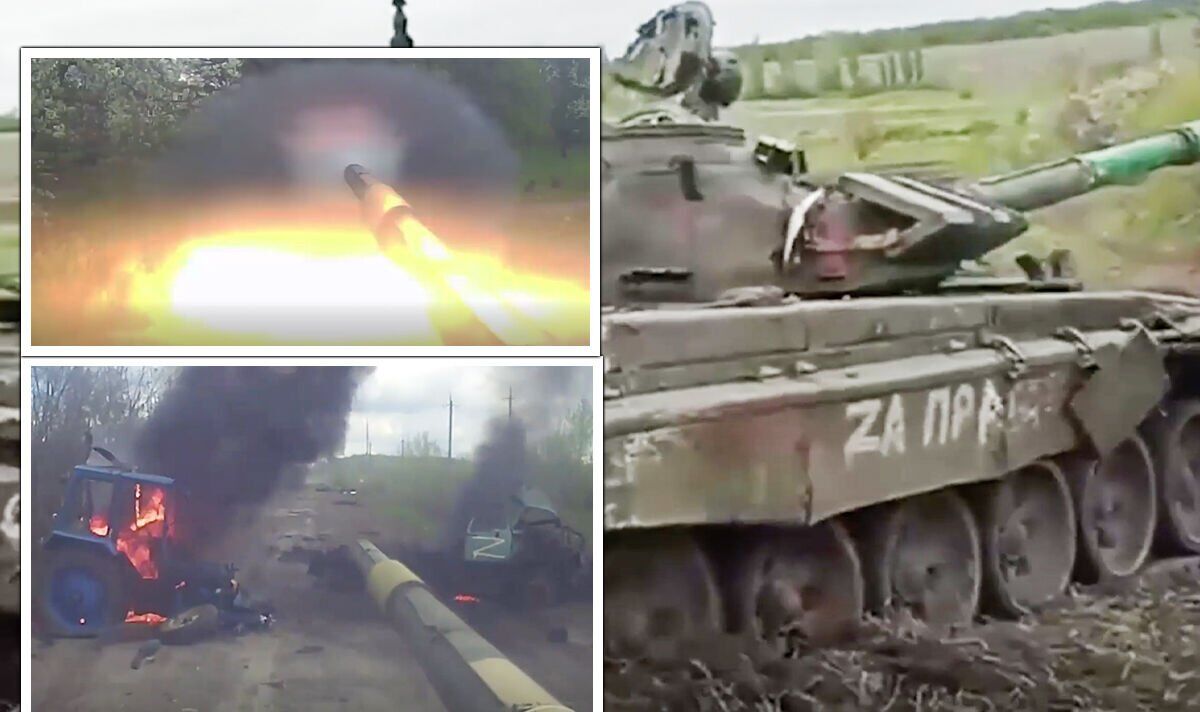 Fighting in Ukraine has intensified as Vladimir Putin‘s increasingly desperate military looks to crush the fighting spirit of the Ukrainian defenders in the strategically important Donbas region. Incredible combat footage has been released from the Ukrainian side showing desperate up-close fighting as Ukraine’s troops look to hold the line against the massive Russian onslaught.

The collection of combat videos includes dramatic footage recorded by the gun cam of a Ukrainian tank as the crew seeks out and destroys Russian equipment.

Moving along roads strewn with burnt and damaged vehicles, the tank is seen advancing before opening fire on a distant target.

The clip then cuts to a destroyed tank which appears to have been obliterated by the Ukrainian shell fire.

Later footage taken from the bodycam of a Ukrainian infantryman captures the moment troops engage Russians in a treeline.

JUST IN: Moment Russian soldiers open fire on defenceless civilians who were walking away

The Ukrainians target the Russian position with their assault rifles before a machine gun mounted on a jeep open ups on the invaders.

Dead Russian combatants are later shown alongside a burnt-out convoy stretching along a road.

It comes as Ukrainian forces destroyed a pontoon bridge and parts of Russian armoured column as it tried to cross a river in the Donbas region.

Russia has suffered setbacks on the battlefield as Ukraine drives its troops out of the region around the second-largest city of Kharkiv, the fastest advance since forcing the Kremlin’s forces from Kyiv and the northeast over a month ago.

Footage released by Ukrainian Airborne Forces Command appeared to show several burnt out military vehicles and segments of a bridge partially submerged in the river.

The images showed many more damaged or abandoned vehicles, including tanks, in the woods and on the track leading to the river.

Delivering a daily intelligence update on Friday, Britain’s defence ministry said the images suggested that Russia had lost armoured manoeuvre elements of at least one battalion tactical group and the pontoon bridging equipment depolyed while crossing the Siverskyi Donets river west of Severodonetsk.

The British defence ministry said Russia was investing significant military effort further south from Kharkiv, near Izium and Severodonetsk, and was attempting a breakthrough towards Sloviansk and Kramatorsk.

The Kremlin calls its February 24 invasion of Ukraine a “special military operation” to demilitarise a neighbour threatening its security. It denies targeting civilians.

Ukraine says it poses no threat to Russia and that the deaths of thousands of civilians and destruction of cities and towns show that Russia is waging a war of aggression.

In the capital Kyiv, wives and relatives of Ukrainian fighters holed up in the Azovstal steel plant in the southern port of Mariupol marched and chanted for their rescue.

Russian forces have been bombarding the steelworks, the last bastion of Ukrainian defenders in a city almost completely controlled by Russia after a siege of more than two months.