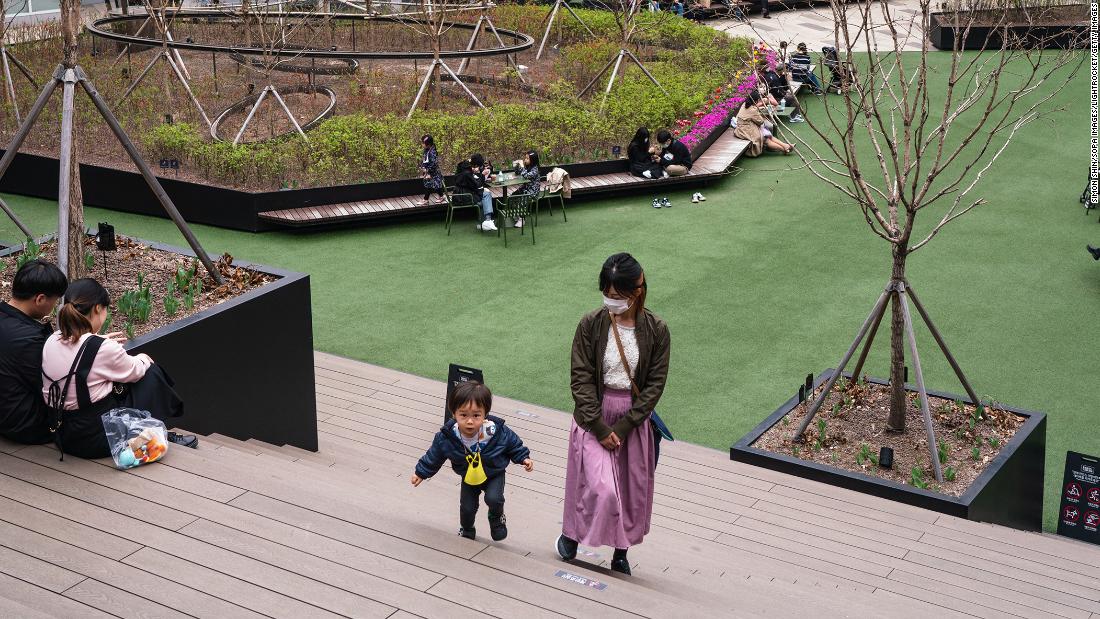 The country’s fertility rate, which indicates the average number of children a woman will have in her lifetime, sunk to 0.81 in 2021 — 0.03% lower than the previous year, according to government-run Statistics Korea.
To put that into perspective, the 2021 fertility rate was 1.6 in the United States and 1.3 in Japan, which also saw its lowest rate on record last year. In some African countries, where fertility rates are the highest in the world, the figure is 5 or 6.
To maintain a stable population, countries need a fertility rate of 2.1 — anything above that indicates population growth.
South Korea’s birth rate has been dropping since 2015, and in 2020 the country recorded more deaths than births for the first time — meaning the number of inhabitants shrank, in what’s called a “population death cross.”
And as fertility rates drop, South Korean women are also having babies later in life. The average age of women that gave birth in 2021 was 33.4 — 0.2 years older than the previous year, according to the statistics agency.
Meanwhile, South Korea’s population is also getting older, indicating a demographic decline that experts fear will leave the country with too few people of working age to support its burgeoning elderly population — both by paying taxes and filling jobs in fields such as health care and home assistance.
As of last November, 16.8% of South Koreans were over 65 years old, while just 11.8% were age 14 or under.
That proportion of elderly Koreans is rising rapidly — it increased by more than 5% between 2020 and 2021, according to census data. Meanwhile, the working age population — people between ages 15 and 64 — declined by 0.9% between 2020 and 2021.
In South Korea and Japan, there are similar reasons behind the decline in births — including demanding work cultures, stagnating wages, rising costs of living and skyrocketing housing prices.
Many South Korean women say they just don’t have the time, money, or emotional capacity to go on dates as they put their career first in a highly competitive job market in which they often face a patriarchal culture and gender inequality.
The South Korean government has introduced several measures in recent years to tackle the falling fertility rate, including allowing both parents to take parental leave at the same time and extending paid paternal leave.
Social campaigns have encouraged men to take on a more active role in childcare and housework, and in some parts of the country, authorities are handing out “new baby vouchers” to encourage parents to have more children.