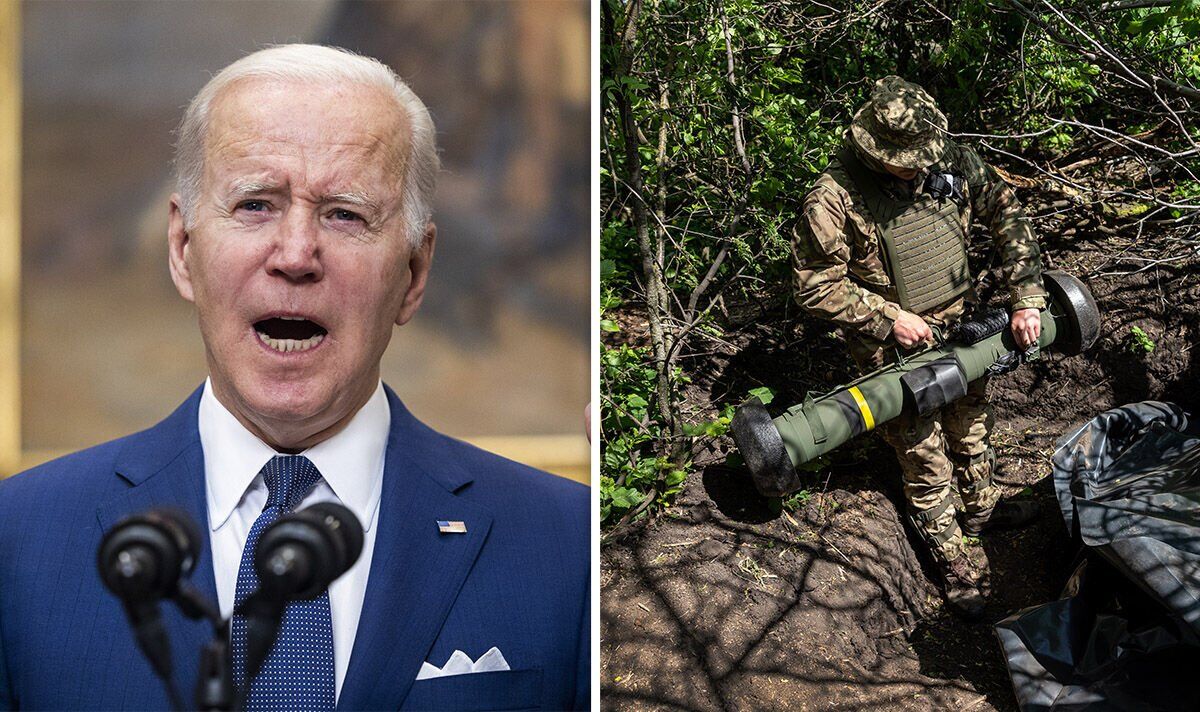 Last week, US President Joe Biden signed legislation to support Ukraine with another $40billion (£31billion). This will include a new $150million (£119million) weapons package for Ukraine, providing additional artillery munitions, radar and other equipment. In a statement, Mr Biden said: “Today, the United States is continuing our strong support for the brave people of Ukraine as they defend their country against Russia’s ongoing aggression.” But as NATO allies – including the UK – continue to support Ukraine with lethal aid, concerns are growing about how the sheer volume of weaponry entering the region is being monitored.

Ukraine has long been known as a hub for the arms black market, with roots in the collapse of the Soviet Union and subsequent conflicts in the region.

Rachel Stohl, an arms-control expert and vice president at the Stimson Center, raised concerns while talking to the Washington Post this week.

She said: “It’s just impossible to keep track of not only where they’re all going and who is using them, but how they are being used.”

Shoulder-fired Stinger missiles, capable of downing commercial airliners, are just one of the weapon systems analysts worry could slip into the possession of terrorist groups.

William Hartung, an arms control expert at the Quincy Institute think tank, said: “The assistance [the US is offering Ukraine now] exceeds the peak year of US military assistance to Afghan security forces during that 20-year war.

“In that case, the US had a major presence in-country that created at least the possibility of tracking where weapons were ending up.

“By comparison, the US government is flying blind in terms of monitoring weapons supplied to civilian militias and the military in Ukraine.”

Ukraine’s issues with the weapons black market can be traced back to the 1990s.

Following the collapse of the Soviet Union, many weapons stockpiled in Ukraine were shipped off to other countries and conflict zones around the world.

The Soviet military left behind large amounts of small arms and light weapons in Ukraine without adequate record-keeping.

According to the Small Arms Survey (SAS), at the Geneva-based Institute of International and Development Studies, a portion of the Ukrainian military’s 7.1 million small arms stock “were diverted to conflict areas” after 1992, showing “the risk of leakage to the local black market.”

After Russia’s 2014 annexation of the Ukrainian Black Sea peninsula, more weapons were distributed around the world from Ukraine.

SAS researcher Matt Schroeder told France24 last week that “the unresolved conflict in the eastern part of the country and general anxiety towards local security conditions” could explain an increase in demand for weapons among ordinary people.

Looking ahead, he added that “collecting these weapons and disposing of them properly would be an overwhelming challenge for any government, let alone one that is still fighting an existential threat,”

Annie Shiel of the Centre for Civilians in Conflict (Civic) warned that “there has been very little transparency around what risk mitigation or monitoring steps the US and other countries sending weapons to Ukraine have taken, if any… to ensure the protection of civilians”.

One senior French military officer also made a chilling prediction, warning what could happen if US anti-tank missiles end up in the wrong hands.

They said: “We’ll be laughing on the other side of our faces once we’re seeing bank robberies with Javelins.”

Speaking to the Washington Post, Jeff Abramson, an expert on conventional arms transfers at the Arms Control Association, demanded that politicians in the US raise concerns over the weapons trade in Ukraine.

He said: “Some of the weapons being provided in the conflict in Ukraine are likely to be found years, and possibly decades later.

“Congressional leaders should be asking these questions, in classified briefings if needed, and the public should be better informed.”