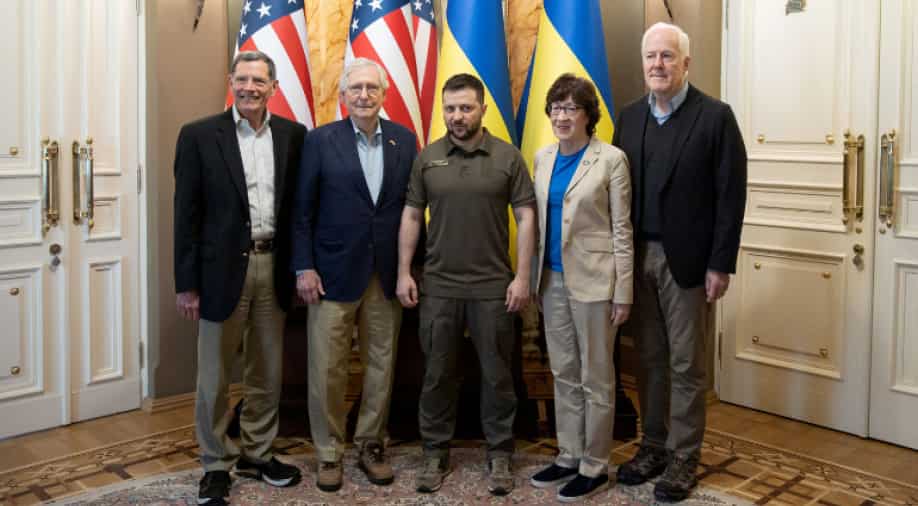 Ukrainian President Volodymyr Zelensky has called for Russia to be officially recognised as a ”terrorist state” during his meeting with a US Senate GOP delegation.

Mitch McConnell, the top Republican in the US Senate, who is pressing Republican Senator Rand Paul to end his opposition to a $40 billion aid package for Ukraine, paid an unannounced visit to Kyiv and met Zelensky.

Hailing the strength of relations between the two nations, Zelensky said “We discussed many areas of support for our state, including in defence and finance, as well as strengthening sanctions against Russia.”

He posted a video of his meeting with McConnell on Instagram, who was accompanied by fellow Senators Susan Collins, John Barrasso and John Cornyn, and in its caption said “Thank you for your leadership in helping us in our struggle not only for our country, but also for democratic values and freedoms. We really appreciate it.”

The Ukrainian leader “expressed hope that the US Senate will promptly approve a package of additional funding to support the Ukrainian people,” as per a statement posted on Zelensky’s official website.

Calling it an honour to Zelensky, McConnell said “that the United States stands squarely behind Ukraine and will sustain our support until Ukraine wins this war. It is also essential that America not stand alone.”

After McConnell’s meeting with Zelensky, the Tass news agency reported that Moscow’s ambassador to the United States warned against closer cooperation with Ukraine.

Tass quoted Anatoly Antonov as telling Russian television “The United States is getting dragged ever deeper into a conflict with the most unpredictable consequences for relations between the two nuclear powers.”