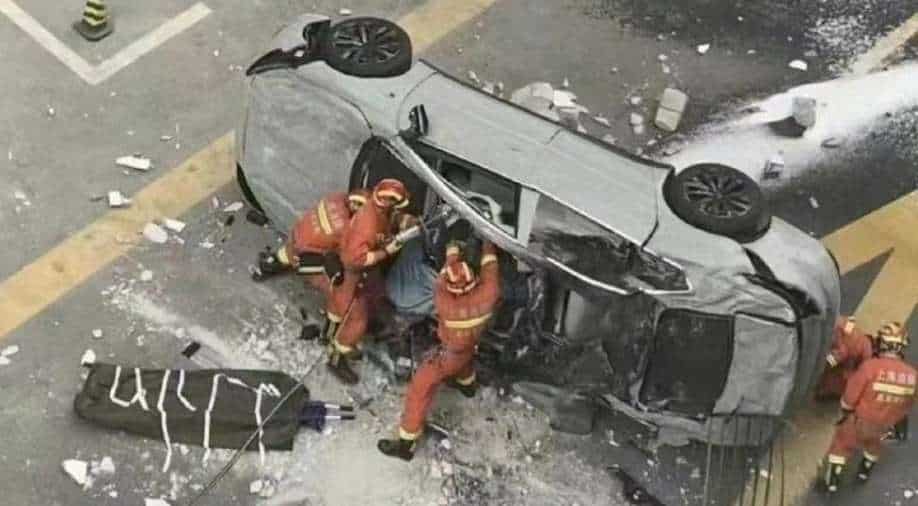 Two people were killed after a Chinese electric car, NIO, fell from the third floor of its headquarters in Shanghai.

The crash took place on Wednesday around 5.20 pm local time. The company said the pair, who were described as “digital cabin testers”, were inside the vehicle when it fell from a parking garage in the firm’s Innovation Port building.

One of the two deceased was a member of staff while the other person was from a partner company.

The third floor from where the car fell has been variously described as a showroom, a testing facility or a car park.

NIO said it is cooperating with the government officials in the investigation while maintaining that the “accident was not caused by the vehicle”, BBC reported.

“Our company has collaborated with the public security department to launch the investigation and analysis of the cause of the accident. Based on the analysis of the situation at the scene, we can initially confirm that this was an accident (not caused by the vehicle),” the company said in a statement.

Unfortunate incident of two test drivers at #China’s electrical vehicle manufacturer #NIO being killed when the car they were in somehow smashed out of a building and came crashing down from a great height.
Archibong Esq pic.twitter.com/TaCLZGMBqL

Notably, the statement was revised after an earlier one mentioned “not related to the vehicle itself”, triggering angry responses on social media.

The company had to release an amended version which has “not caused by the vehicle” in brackets apparently to de-emphasise that part of the sentence.

“We feel very sad about this accident and would like to express our deepest condolences to our colleague and partner employee who lost their lives. A team has been set up to help the families.”

NIO is one of China’s biggest home-grown companies with the aim of taking over the electric vehicle industry.

It has staked a lot on interchangeable batteries in its cars as a way to overcome customer concerns about frequent charging.

The company sees itself as a rival to multi-billionaire Elon Musk’s US-based electric car maker Tesla, which has a major manufacturing plant in Shanghai.