Skip to content
HomeWorldUK school’s bizarre rule bans ‘hugging’ among students, people call it a sure-fire way to give them ‘problems’

In a bizarre incident, a United Kingdom school has banned all types of physical contact between students. This includes hugging and even play-fighting. As per the school, this rule seeks to “further improve our positive school culture”.

As per Metro News, Mossley Hollins High School’s ‘newsflash’ says that no student “should ever be” touching another. The ban is also imposed during breaks and lunchtime.

The circular goes on to say that there are five reasons behind the so-called ‘no-contact’ rule. These include ensuring that students ‘feel safe in school’ have ‘healthy relationships with their peers’, ‘a supportive environment in and out of lessons,’ show ‘mutual respect and are kind to each other’, ‘have positive attitudes toward each other,’ and ‘have positive attitudes toward’ one another. 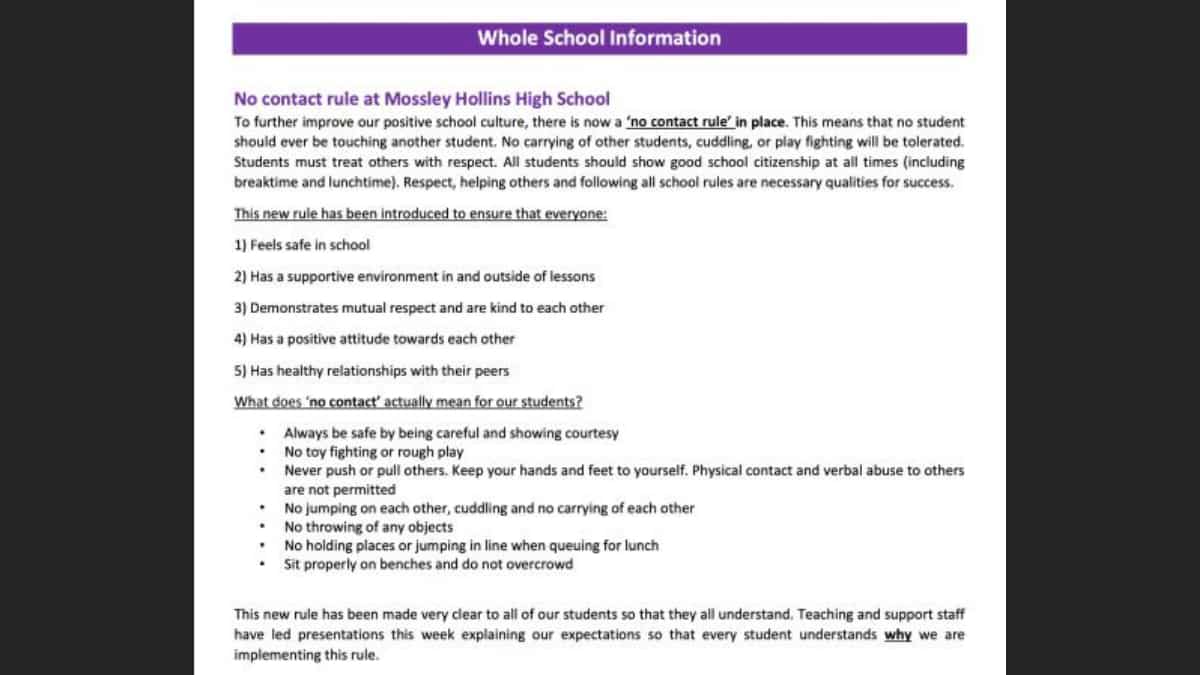 It continues: “This new rule has been made very clear to all of our students so that they all understand. Teaching and support staff have led presentations this week explaining our expectations so that every student understands why we are implementing this rule.”

However, the rule has sparked outrage among parents and on social media. Critics of the rule question whether children would be allowed to hug their friends, comfort them and provide first aid or if even that is against the rules. Others have commented that the rule is ridiculous, and that teaching children not to show affection is a sure-fire way to “give them problems down the line.”

The policy had been in existence for some time and had only been formalised, according to a letter from the previous headteacher of the school and chief executive of the Tame River Educational Trust, Drew Duncan.

Following the media attention, according to Metro News, the school has released a statement defending itself and requesting that the media concentrate on “real stories.”