Three former US Army cavalrymen have spoken up about seeing UFOs along the Israel-Egypt border in the Sinai Peninsula in 2014.

The veterans told the Daily Mail on Tuesday that they saw eight bright objects hovering and speeding across the sky from an outpost in Sinai on the Egyptian border around December 2014.

The three cavalry scouts, who were described as trained in identifying aircraft, told the UK outlet they believed the objects they saw were not man-made.

“I would describe it as a big object with several smaller objects, which appeared to be communicating, or scuffling, like a dogfight in the air,” said one of the three, Sergeant Travis Bingham, 36. Bingham was stationed with E4 Specialist Vishal Singh and Private First Class Dovell Engram at Observation Post 3-1 in Sinai near the south end of the Israel-Egypt border.

“We knew it wasn’t our military and it was baffling,” he added. “The objects were glowing – you could clearly see them with the naked eye, and it was clear how fast they were moving. To this day, I’ve never seen anything like the craft, covering such distance with extreme speeds.”

Their comments were reported on the same day the US Congress held its first hearing in half a century on unidentified flying objects. (No, there is still no government confirmation of extraterrestrial life.)

Testifying before a House Intelligence subcommittee, Pentagon officials did not disclose additional information from their ongoing investigation of hundreds of unexplained sightings in the sky.

Ronald Moultrie, the undersecretary of defense for intelligence, said the Pentagon was trying to destigmatize the issue and encourage pilots and other military personnel to report anything unusual they see. 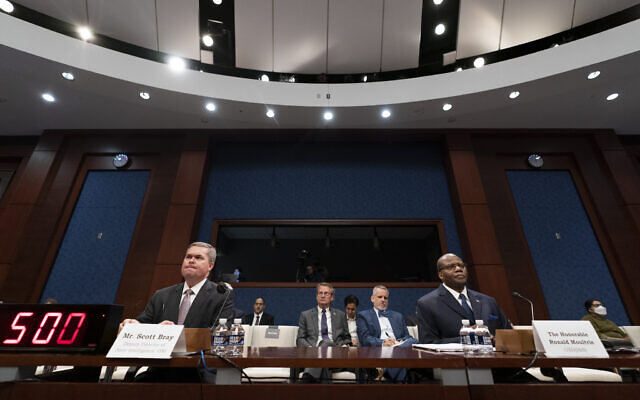 Deputy Director of Naval Intelligence Scott Bray, left, and Under Secretary of Defense for Intelligence and Security Ronald Moultrie speak during a hearing of the House Intelligence, Counterterrorism, Counterintelligence, and Counterproliferation Subcommittee hearing on ‘Unidentified Aerial Phenomena,’ on Capitol Hill, May 17, 2022, in Washington. (Alex Brandon/AP)

Sightings are usually fleeting. Some appear for no more than an instant on camera — and then sometimes end up distorted by the camera lens.

A top Pentagon official on Tuesday briefly demonstrated the challenge. Scott Bray, deputy director of naval intelligence, stood next to a television to show a short video taken from an F-18 military plane. The video shows a blue sky with passing clouds. In a single frame — which it took several minutes for staff in the room to queue up — there is an image of one balloon-like shape.

“As you can see, finding UAP is harder than you may think,” Bray said, using the acronym for “unidentified aerial phenomena.”