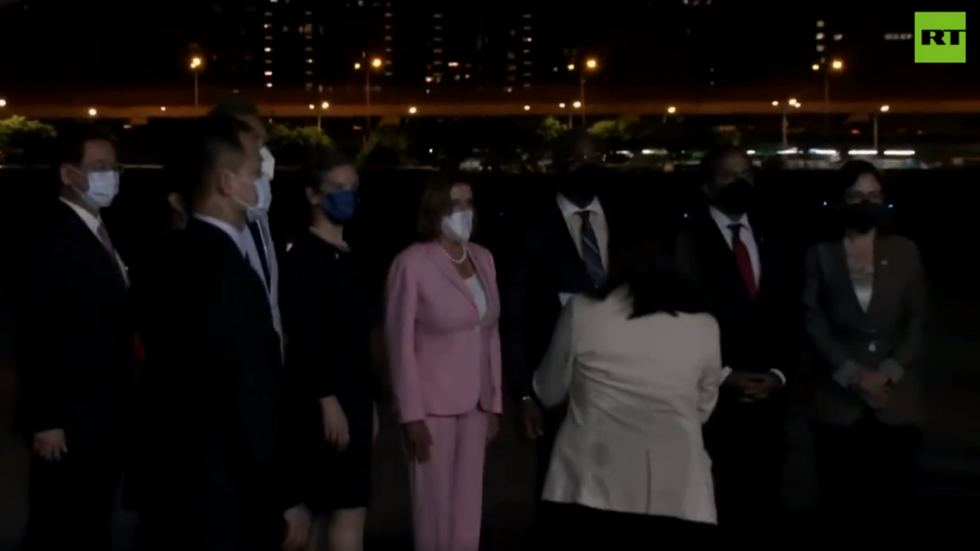 A plane carrying Nancy Pelosi landed in Taiwan on Tuesday. The Chinese Foreign Ministry has condemned the visit, saying it violates the country’s sovereignty.

“This is a serious violation of the one-China principle and the provisions of the three China-US joint communiqués. It has a severe impact on the political foundation of China-US relations, and seriously infringes upon China’s sovereignty and territorial integrity,” the ministry said in a statement.

Pelosi said her visit to Taiwan in “no way contradicts” US’ long-standing policy on the self-governed island.

Taiwan wasn’t mentioned among the official destinations of the speaker’s Asian tour, which included Singapore, Malaysia, South Korea and Japan.

China conducted live-fire military drills on Saturday off the coast of the southeastern province of Fujian, just across the strait between the mainland and Taiwan, in the wake of Pelosi’s trip to the region.

Despite agreeing with the One China policy on paper, the US maintains strong unofficial ties with the island of 23.5 million, selling weapons to Taipei and backing its push for sovereignty. Taiwan has been self-governed since 1949, but never officially declared independence from Beijing.

On Monday, China’s ambassador to the UN, Zhang Jun, reiterated that the One China principle is “a red line” in Beijing’s relations with other nations, and no one will be allowed to cross it.

“China is fully prepared to respond. If the US insists on making the visit, China will take firm and strong measures to safeguard its national sovereignty and territorial integrity, and the US has to bear all the serious consequences arising thereof,” Zhang warned.

Two aircraft carriers of the Chinese Navy left their home ports right before Pelosi’s arrival, China’s Global Times reported. The Liaoning departed from the port of Qingdao in Shandong province on Sunday, and the Shandong left the port of Sanya in Hainan on Monday, accompanied by a Type 075 landing ship.

Meanwhile, eight F-15 escort fighters took off from the US military base on Japan’s Okinawa Island. There have also been reports of five KC-135 tanker aircraft moving into the area. Two HC-130J Combat King II military transport aircraft have been transferred from Alaska to Okinawa, along with several KC-135 Stratotanker refuelling planes, according to media reports.  The USS Ronald Reagan is also approaching Taiwan. The Ronald Reagan Carrier Strike Group is now in the waters east of the Bashi Canal, part of the Luzon Strait. The American landing ship USS Tripoli is located near the Japanese island of Okinawa.