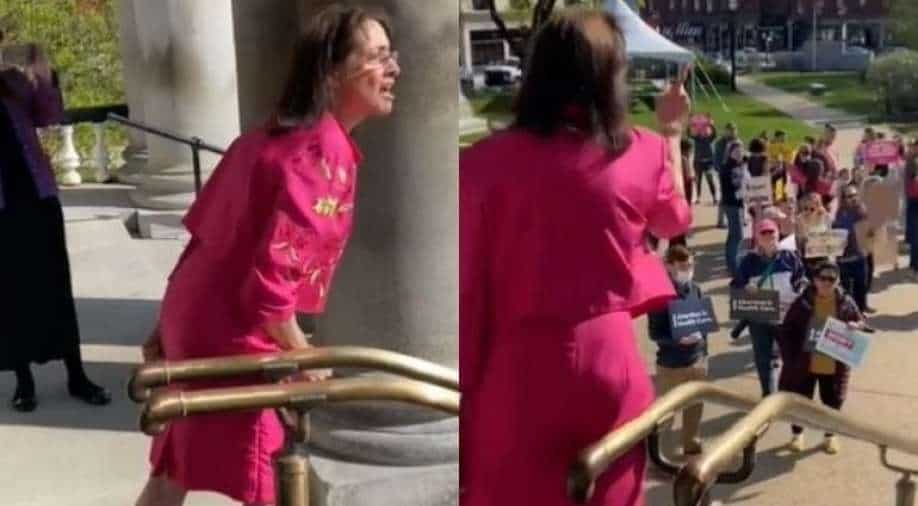 In a video clip being circulated on social media, State Representative Susan DeLemus could be seen losing cool and calling protesters of pro-abortion rights “murderers”.

DeLemus, who is from Republican Party and represents Rochester, kept screaming and saying, “You’re a murderer”, to the protesters.

The incident happened on the steps of the New Hampshire Statehouse on Thursday.

The lawmaker also called herself a “murderer”.

Also Read: US activists fear rolling back abortion rights can act as threat to gay marriage

The US is already boiling over the issue. To raise their concerns to officials for advocating to uphold legal abortion access, many protesters had assembled outside New Hampshire Statehouse.

Firstly, protesters started shouting “shame on you” when lawmakers were present at the statehouse.

Soon, DeLemus lost her cool and pointed finger at the protesters and started screaming “Shame on you, shame on all of you. Shame on you, killing babies.” The crowd also repeatedly screaming “You’re a murderer!”

Watch: Abortion & Burqa Debate: Is US really a champion of Women rights?

Finally, DeLemus also shouted, “I murdered my own baby!” She referred to an abortion, which she had undergone decades ago.

In the past, she has also publicly declared her regret about it.

In 2012, DeLemus had shared about an abortion she had gone through when a bill was up for discussion, AP reported.