Skip to content
HomeWorldWION Global Summit 2022: Need to invest in peace instead of war, say experts 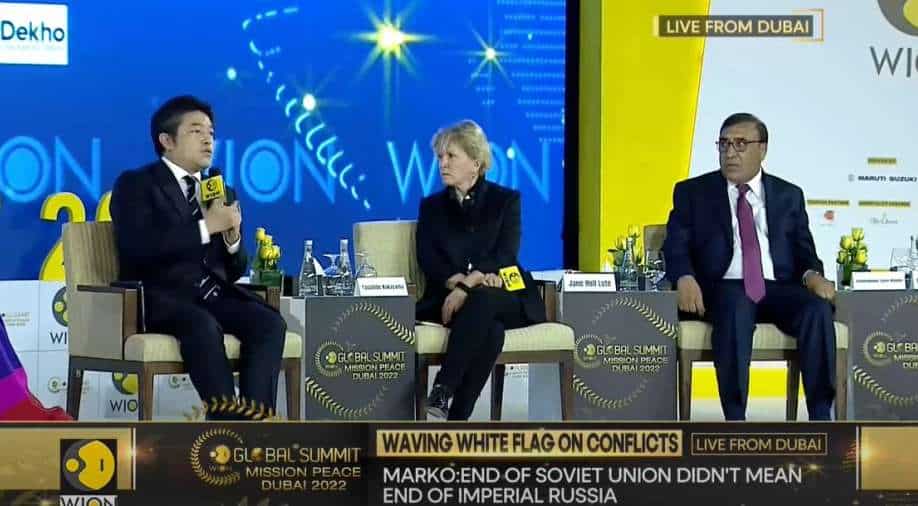 Reconciliation and peace figured prominently during the first session of WION’s ‘Global Summit: Mission Peace’ in Dubai where speakers made a fervent call for global peace.

The first session was on ‘Waving the white flag on armed conflicts’.

It was joined by speakers:

Speaking on the Russian-Ukraine war, which is believed to have been triggered by the so-called NATO expansion wherein Kyiv tried to join the US-led military alliance, Mihkelson said, “I don’t think there’s something called NATO expansionism. NATO can’t expand or force people to join the defence alliance. Think about Finland and Sweden.”

Mikhelson agreed that sanctions “are the last resort”, adding that “war machines getting money and resources must be punished to end conflicts as soon as possible”.

This view was concurred by Lute who said, “If you want to prevent the spread and continuation of violence, you need to create military and financial fire breaks, and sanctions are designed to do that.”

Drawing parallels from the ongoing Russian-Ukraine conflict, when asked about the China-Taiwan tensions, Nakayama said, “Xi Jinping is smart. I don’t think he is going to invade Taiwan. But there is some possibility. I think he will be weighing his options. One is the peaceful way and the other option is force by the military action. And the kind of options he chooses will depend on who the superpower is—which is the USA.”

Speaking on the Afghanistan issue, where the Taliban swiftly took over the reins after the US withdrawal, former deputy minister of interior, Afghanistan, Shahmahmood Miakhel spoke on the reasons why Washington failed to secure peace in the crisis-hit region.

“The actual problem was not tackled in Afghanistan, it was just an attempt to cure it. The money we spend on war should be spent on peace process. We don’t focus on peacebuilding, we are only limited to peacemaking,” he said.

“You cannot wash blood with blood,” Miakhel added, while highlighting why it’s important to invest in peace and prevent wars